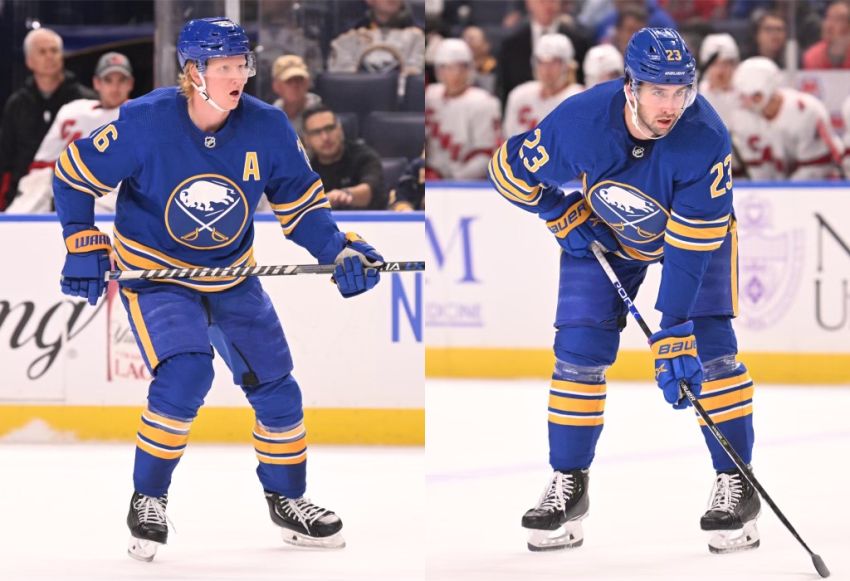 BUFFALO – At least 20 times tonight, Sabres defensemen Rasmus Dahlin and Mattias Samuelsson will hop over the boards together and be charged with trying to neutralize Tampa Bay Lightning superstar Nikita Kucherov and his linemates.

How stiff of a challenge will the Sabres’ top duo have? Well, Kucherov, who has been skating with center Brayden Point and Brandon Hagel, has registered 31 points this season, the NHL’s fifth-highest total. The Russian winger has torched the Sabres throughout his career, compiling 17 goals and 35 points in 29 contests.

In the teams’ last meeting Nov. 5 in Tampa Bay – Dahlin and Samuelsson were both injured and missed the game – Kucherov enjoyed a dominant four-point night, assisting on the tying and go-ahead goals before his empty-netter sealed a 5-3 win.

“He can beat you in about every way,” Samuelsson said of Kucherov following Sunday’s practice at KeyBank Center. “There’s a lot of superstars where you kind of figure out their moves or what they’re going to do or what their tendencies are. I feel like he’s very unpredictable. You never know if he’s going to beat you with a shot or walk you or pass it away.”

While Dahlin and Samuelsson have regularly drawn the opposition’s top talent over the past year, there’s still a bit of novelty in the difficult assignments.

“I feel like I’m still proving myself every day against these top players on whatever team it is,” Samuelsson said. “So, yeah, it’s fun, it challenges me.”

But Sabres coach Don Granato hopes the 22-year-olds reach “a point sooner than later where” playing against a top line doesn’t offer any “extra excitement.”

“They just say whoever you put us against, we know what to do and how to do it and we’re going to play,” he said.

He added: “They’re getting to that point game by game. The more they play together and the more reps they get together, the more they’re going to have that, they won’t even realize. It blends in one good player to the next player, and they’re moving toward that.”

Having some rest over the weekend should help Samuelsson tonight. He endured a rough outing in Friday’s 3-1 setback to the New Jersey Devils, the Sabres’ third game in four nights.

When he returned from a 13-game absence (lower body) Tuesday, his adrenaline took over, and he played well in back-to-victories.

“My first two games it was a little better, back-to-back, adrenaline was high,” Samuelsson said. “I was just excited to be back in the lineup, and I think I kind of just tried to play off that energy.”

But on Friday, Samuelsson ran out of gas, and he committed some gaffes.

“He just looked exhausted,” Granato said. “… He looked like he was worn out the other night. He tripped a few times. One … resulted in (a goal), which is just uncharacteristic of him. So he had a tough night, and I do believe it was coming off a long injury and playing three in four was the biggest challenge of it.”

Samuelsson said “that was the first game I felt like I missed a month.”

“But it’s just fun to be back in the lineup, it’s fun to be back with the guys,” said the American, who has been playing about 20 minutes a night. “I’m just trying to get back in a rhythm. I thought I started the year really well in those first couple games.”

Dahlin, meanwhile, keeps earning big minutes each game. On Friday, he skated a game-high 27 minutes, 5 seconds, the 13th time this season he has played at least 26 minutes.

Overall, he has averaged a team-high 26 minutes, 9 seconds of ice time in 20 games this season.

Dahlin said when he receives mega-minutes, he must adjust accordingly.

“It’s two kind of different type of games when you play, whatever, 23 or 28 minutes,” the Swede said. “You got to be smarter when you play a lot of minutes. You can’t really jump into offense every shift, so you got to be smart. But I love it. Whatever the coaches want to do, I’m up for it.”

Sabres winger Rasmus Asplund, out the last two games with an upper-body injury, practiced Sunday and is available to play, Granato said.