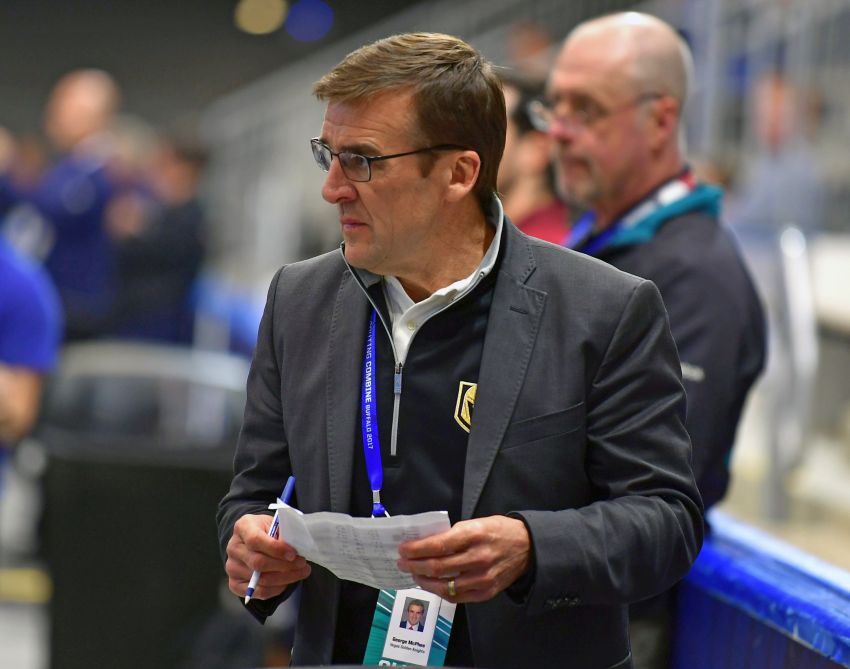 BUFFALO – Seventeen years ago, as president and general manager of the Columbus Blue Jackets, Doug MacLean spent almost a year preparing for the NHL Expansion Draft.

“Hundreds and hundreds of hours went into it,” MacLean, now an analyst for Sportsnet, told the Times Herald by phone Saturday.

MacLean, who was readying his Blue Jackets to begin play with the Minnesota Wild in 2000-01, did one mock draft a day for 10 months. Naturally, his projections changed wildly as the year progressed.

By the end, thanks to joining the NHL with Minnesota and friendly protection rules for 26 of the 28 teams – the league exempted the Atlanta Thrashers and Nashville Predators, two recent expansion entries – MacLean had slim pickings.

“When I looked at what we projected in October to be available and what was available, it was sickening,” MacLean said.

MacLean selected a lot unknown players – have you, for example, ever heard of Sergei Luchinkin? – he had no intention of using.

“I essentially took guys that were unrestricted that I didn’t have to do anything with,” said MacLean, whose team earned a respectable 71 points in its first season.

Still, MacLean found one jewel, grabbing Geoff Sanderson, who had two 30-goal seasons in him. Former Sabres GM Darcy Regier and MacLean arranged a side deal so Columbus would take the underachieving former 40-goal scorer and his big contract.

Fast forward to today, and the Vegas Golden Knights will almost certainly enjoy the most fruitful expansion draft in NHL history Wednesday. Teams could only protect seven forwards, three defensemen and one goalie or eight skaters (forwards and defensemen) and one goalie. Players with two or fewer seasons were excluded.

Some legitimate talent is available to the Golden Knights, a team the NHL clearly wants to thrive early.

“I compare it to what we were up against, it makes me sick to my stomach,” MacLean said.

MacLean, however, isn’t bitter. The Blue Jackets and Wild paid an $80 million entrance fee to the league. The Golden Knights paid a whopping $500 million. For half a billion, the NHL better let them have some good players, right?

Florida Panthers winger Jonathan Marchessault, who scored 30 goals last season and will earn only $750,000 in 2017-18, is available. So is goalie Marc-Andre Fleury, a vital part of the Pittsburgh Penguins’ run to a second straight Stanley Cup.

“I’m happy for them, but I’m thinking, ‘Wow,’” MacLean said. “The ability they have to negotiate versus what we had is dramatically different with two teams versus one and better rules. But you know what? In fairness, they deserve it, because they paid $500 million for the franchise. We paid $80 (million).”

So every NHL team will lose one player Wednesday. Trying to nullify that loss has left GMs scrambling to make side deals so Vegas counterpart George McPhee lays off certain players. Columbus GM Jarmo Kekäläinen is so desperate he plans to send Vegas his first-round pick in Friday’s NHL Draft, according to the Columbus Dispatch.

“That’s what I’m shaking my head about,” MacLean said. “It’s terrific for Vegas.”

Which player could the Sabres lose? GM Jason Botterill said last week he has spoken to McPhee but wouldn’t say if he had worked out a deal. It’s believed the Sabres want to offer Vegas something so they can keep unprotected goalie Linus Ullmark, a 23-year-old prospect with a legitimate chance to become an NHL starter someday.

Carrier’s talents – he’s gritty, fast and possesses a bit of a scoring touch – would be welcomed on any team. The Sabres acquired the former second-round pick from the St. Louis Blues in the Ryan Miller trade. Carrier often earned duty on a top line last season and compiled five goals and eight points in 41 games.

While 26-year-old Bogosian possesses notable talent and has contributed to the Sabres, they would probably love to ditch his $5.5 million salary. Second-pair defensemen with a history of injuries can’t eat up that much of a team’s salary cap.

Sure, Gorges has earned some ire from Sabres fans, but if he’s cast in a different role, say as a third-pair defenseman with limited minutes, he could be an effective player.

The 32-year-old is also an accountable, stand-up veteran youngsters can learn from. He would make a fine captain for an expansion team. He only has one year and $3.9 million left on his contract.

After scoring only six times two seasons ago, Moulson enjoyed a decent comeback campaign, scoring 14 goals, including 11 on the power play.

The 33-year-old often skated on the fourth line and the Sabres’ second power play, so on an expansion team he could earn bigger minutes and possibly score 20 goals again.

Moulson’s wife, Alicia, is McPhee’s goddaughter, so perhaps the close connection means something and Vegas would absorb his $5 million salary. The couple even named their son George after McPhee.