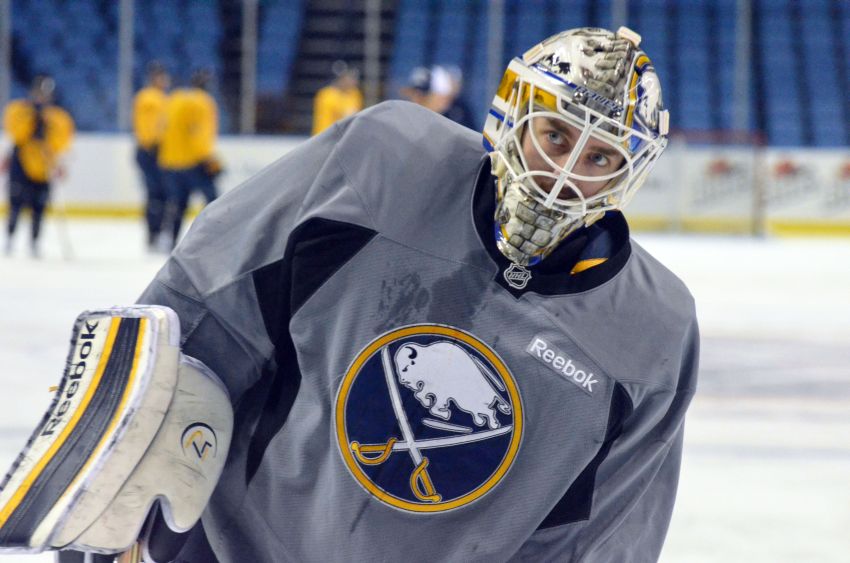 Jhonas Enroth was on the ice this morning. ©2013, Dan Hickling, Olean Times Herald

Miller occasionally skips morning skates, so when he wasn’t on the ice today inside the First Niagara Center, it hardly seemed like a big deal.

But interim Sabres coach Ron Rolston said following the skate Enroth would start for the second time in three games. The 24-year-old only received three nods in the first 26 games.

“We’d certainly like him to build off of that last game because … I know that was one of the best games I’ve seen him play since I’ve been in the organization,” Rolston said about Enroth’s 27-save performance in a 3-2 shootout loss in New Jersey, his first start since Feb. 5.

Enroth dazzled Thursday before cramps – something he joked were related to drinking coffee – forced him out following the tying goal with 1:06 left in regulation.

He had the first of his two NHL shutouts here against the Rangers on March 30, 2011.

Tyler Ennis, whose face was crunched into the boards Sunday, will sit tonight but Rolston’s “very hopeful” the center will return Saturday. Rookie Mikhail Grigorenko will replace Ennis.

One thought on “Miller’s sinus infection will give Sabres’ Enroth start tonight; Leopold back in”