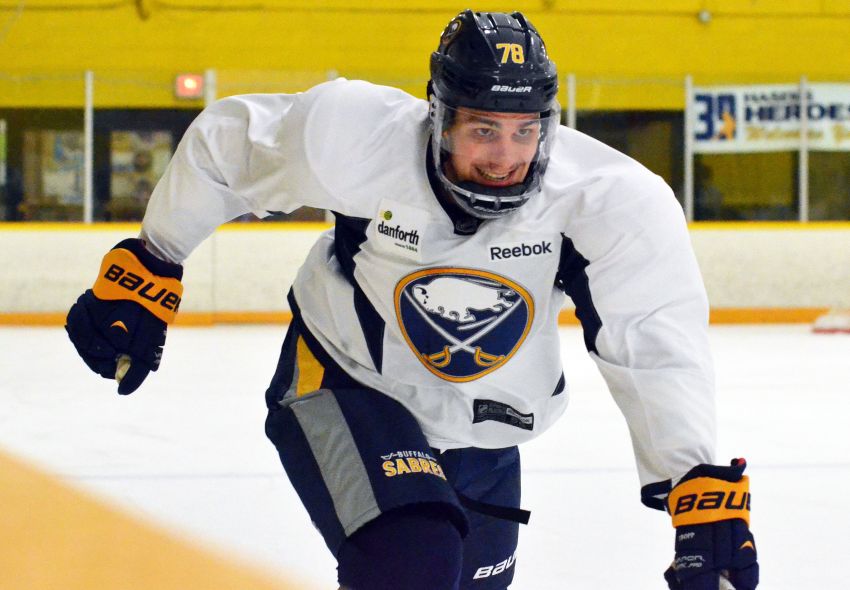 BUFFALO – Matt D’Agostini had just experienced NHL waivers, what he described as “the most anxious 24 hours of your life.”

The Pittsburgh Penguins, his third team since the beginning of last season, released him Tuesday. The 27-year-old winger could’ve gone to the minors for the first time in four years.

But the hapless Sabres claimed D’Agostini on Wednesday, awarding him perhaps his final NHL chance.

So before D’Agostini spoke to the media Thursday inside the First Niagara Center, he grabbed two new Sabres hats from his stall, picked out his favorite, peeled the stickers off and proudly wore it.

“Just another opportunity to come in and prove myself and prove I can be a regular NHL player every day,” D’Agostini after his first practice.

Interim Sabres coach Ted Nolan will skate D’Agostini beside center Ville Leino and Steve Ott tonight against the Toronto Maple Leafs, an early opportunity for him to impress.

“When you get a goal scorer,” Nolan said about D’Agostini following an optional skate, “you got to put him in a position to score some goals.”

D’Agostini added: “Whatever line it’s on, whatever role they want me to play, I can go out there and do that.”

To create room for D’Agostini, the Sabres waived Corey Tropp, who was claimed by the Columbus Blue Jackets on Thursday.

More on the 24-year-old winger later.

“I don’t know, man,” D’Agostini said. “I’ve been trying to find it myself. Confidence is the main thing. Hopefully, by getting the playing time and getting the minutes, I’ll get my confidence back and get back to my old game.”

D’Agostini said he played with David Backes and Andy McDonald, two strong scorers, some of his career season, although he rotated on lines.

The Blues traded D’Agostini to the New Jersey Devils early last year. New Jersey didn’t tender a contract in the offseason, making him a free agent. Pittsburgh signed him, but he suffered an undisclosed injury during training camp.

The 6-foot, 198-pound D’Agostini, who possesses a strong shot and good wheels, has one assist in eight games this season.

“Off to kind of a slow start,” he said. “Hopefully, I kind of get a fresh start here and rebuild myself as a player.”

Of course, the flip side of bouncing around is always being wanted and landing on your feet.

“It always gives you a little bit of confidence,” D’Agostini said. “You’re let go by one team but it’s good to know you’re wanted by someone else. I’m hoping to reward them.”

He added: “I hear nothing but good things about this organization.”

D’Agostini’s from Sault Ste. Marie, Ont., where Nolan has coached and played. He’s served as an instructor at Nolan’s hockey school. Nolan said he’s known him since he was 15 or 16 years old.

Pat LaFontaine, the president of hockey operations, brought D’Agostini’s availability up to Nolan.

“You’re happy for the young guy,” he said. “Pittsburgh lost a guy to us (D’Agostini). That’s unfortunate we haven’t got enough room for him right now. It’s good for him to be picked up by somebody else and get his career going.”

The Sabres wanted Tropp, who has one assist in nine games this season, to play “real minutes” in Rochester to further his development, Nolan said.

Tropp tore up his knee early last season and broke his jaw during a preseason fight this year. He has three goals and nine points in 43 NHL games.