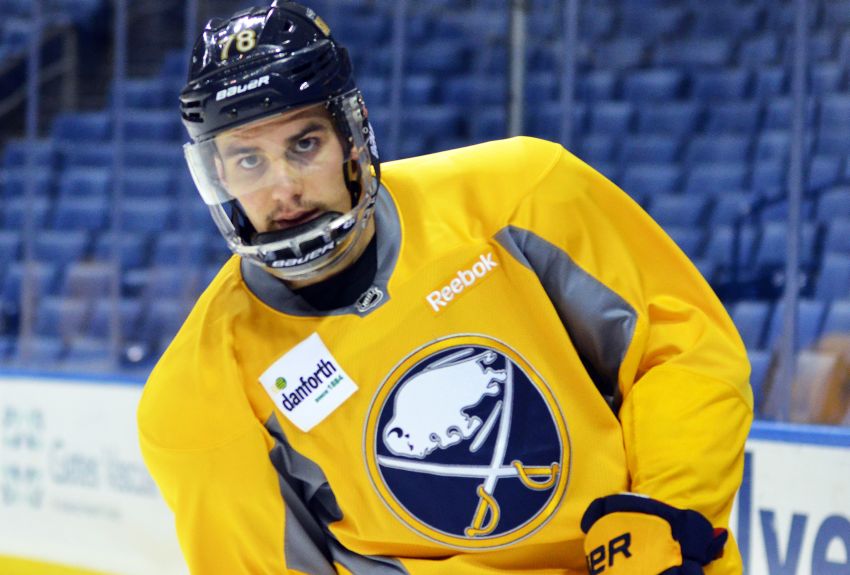 “Pittsburgh lost a guy to us,” Nolan said this afternoon inside the First Niagara Center. “That’s unfortunate we haven’t got enough room for him right now. It’s good for him to be picked up by somebody else and get his career going.”

That guy Pittsburgh lost, winger Matt D’Agostini, skated in the Sabres’ optional practice this morning. Nolan plans to play him beside Ville Leino and Steve Ott on Friday against Toronto.

“When you get a goal scorer,” Nolan said, “you got to put him in a position to score some goals.”

The Sabres are D’Agostini’s fourth team since the beginning of last season.

“It’s always tough,” said D’Agostini, who will wear No. 27. “That’s just the way the league is. You bounce around. With change comes opportunity, and success follow that. I’m excited for every new opportunity I get.”

He’s especially excited for this one.

“Just another opportunity to come in and prove myself and prove I can be a regular NHL player every day,” D’Agostini said.

“I don’t know, man,” D’Agostini said. “I’ve been trying to find it myself. Confidence is the main thing. Hopefully, by getting the playing time and getting the minutes I’ll get my confidence back and get back to my old game.”

In other news, Cody McCormick (upper body) practiced again today and could play this weekend. The forward said he’s day-to-day.