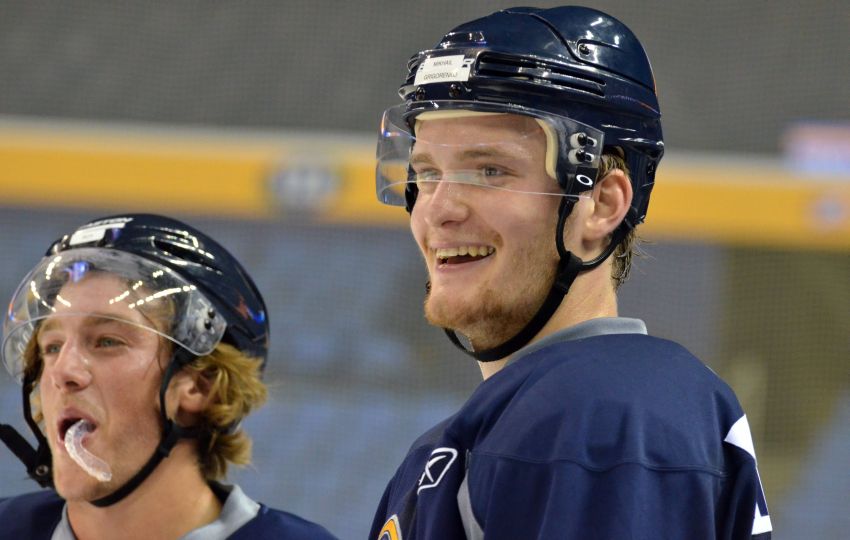 BUFFALO – About 10 minutes into his first NHL practice, Mikhail Grigorenko calmed down, channeled his nervous energy and began showcasing the many talents that could land the 18-year-old in the Sabres’ opening-day lineup next week.

The slick Russian center enjoyed a solid showing on Sunday, the first day of training camp and the lockout-shortened 2012-13 season.

But, as Lindy Ruff said, “practice drills are one thing.” Competition drills, where Grigorenko can utilize his 6-foot-3, 200-pound body, will tell the Sabres coach more. So will the modified game action Grigorenko should see throughout tonight’s intrasquad scrimmage.

“Then … (playing) against an opposition that’s not his own will tell you even more,” Ruff said inside the First Niagara Center. “He doesn’t look like a junior player. His size, his strength I think is already ahead of where that’s at.”

The Sabres will be giving the first-round pick every opportunity to crack the lineup during the shortened camp. He can receive a five-game trial before his contract kicks in.

Ruff wants Grigorenko, who centered Ville Leino and Steve Ott on Sunday, to wow him.

Grigorenko, a force with the QMJHL’s Quebec Remparts this season, said his comfort increased during the one-hour, 45-minute session. Teammates helped him.

“It was really faster,” said Grigorenko, who believes he “did well” in his first taste of the NHL. “All those guys here are really strong here and big.”

For now, Grigorenko’s “locker” consists of a plastic chair off to one side of the dressing room and a nameplate leaned against a ledge. Rookies must earn everything.

In injuries news, winger Nathan Gerbe (spine) and forward Cody McCormick (finger) both practiced Sunday, although neither has been cleared for full contact.

Gerbe was first injured when Philadelphia’s Marc-Andre Bourdon rammed him head-first into the boards last December. He kept playing, but the injury worsened over time.

The diminutive American began skating again in November and hopes he can return soon. He said he’s heard “20 different timeframes” for a recovery.

“I guess when they’re messing around with spine and nerves anything can go wrong, so anything can set you back,” Gerbe said.

Gerbe, an aggressive thumper, said this week will indicate when he can return.

“(Sunday) I skated with the players for the first time since April,” he said. “It was a big change for me to where I need to feel comfortable and confident out there and know I can turn and hit guys. I think that’s when I’m ready.”

Since he was injured, Gerbe got paid during the lockout and had the full run of the team’s facilities and staff.

“It was lonely days, bored,” Gerbe said. “I guess for me it was good. My pure focus was how I would be in-season. I’d come to the rink, I’d do my therapy, do what I needed to, work hard in the gym and then get on the ice.”

He’s uncertain about his status for opening day. He said he could “go into a corner and really jam ” Sunday.

Notes: The Sabres have 26 players – 15 forwards, nine defensemen and two goalies – competing for the 23-man roster. … Sabres goalie Ryan Miller joking while talking to the media Sunday. “It’s been eight months. I lost all my clichés.” … Ruff, who broke three ribs during a scary practice collision last year, on what he did Sunday morning: “I planned out where I was going to stand so I didn’t get hurt. I started that about 6:30.” … Ruff said players were so excited to be back they reported for their physicals at 6:30 a.m. Sunday, 30 minutes early. … Some members of the Rochester Americans will play in tonight’s scrimmage.