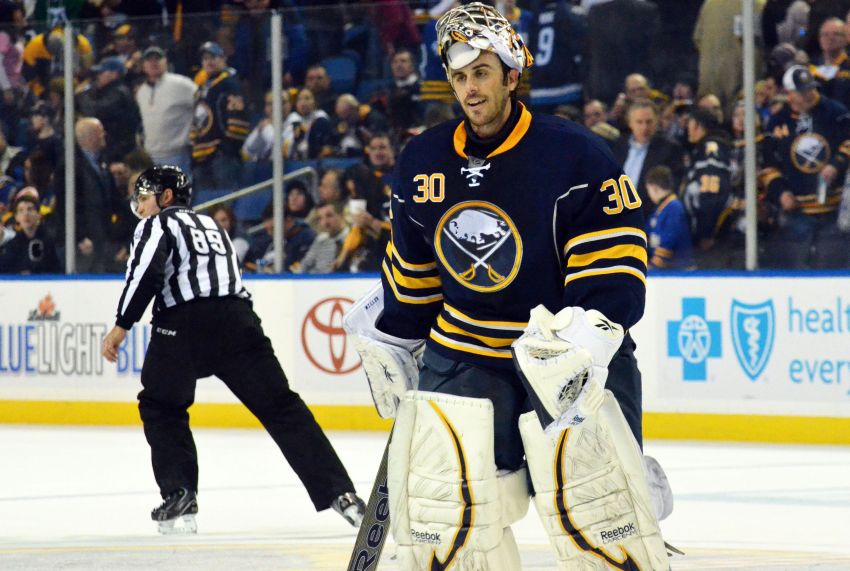 The next day, a 2-1 road triumph in Toronto only strengthened the belief the veteran club could be an Eastern Conference heavyweight.

The 13th-place Sabres (9-13-2) open the second half of the lockout-shortened campaign tonight in New Jersey against the Devils as arguably the NHL’s biggest disappointment.

In the midst of a 4-12-1 run on Feb. 20, the Sabres’ spectacular implosion cost longtime coach Lindy Ruff his job, a stunning development.

If the Sabres miss the postseason for the second straight year and fourth time in six seasons, could general manager Darcy Regier be next?

With 20 points, the Sabres are only four points behind the eighth-place New York Rangers. But that sounds much better than the reality.

The Rangers have three games in hand. The Sabres have played more contests than 11 conference foes.

The Sabres still must climb five teams to reach a playoff spot. And three-point games are killer this season with conference-only play. The Sabres gave up two points with two shootout wins last week.

The Rangers are on pace for 55 points, so the Sabres probably have to win at least 18 of their remaining 24 games to have a realistic postseason chance.

As of Wednesday afternoon, sportsclubstats.com pegged the Sabres’ playoff chances at a miniscule 1.2 percent.

Interim Sabres coach Ron Rolston certainly has an arduous task ahead of him.

Here’s some of what has gone wrong (and well) this season.

Where do we start? We’ll have to whittle a 10-part series down to a single story.

The defense is terrible

Last season, when the Sabres claimed injuries contributed heavily to their ninth-place finish, they pointed to the banged-up defense corps.

If the defense had stayed healthy, they said, the Sabres probably would’ve made the playoffs.

The defense began performing wretchedly after the 2-0 start this season, quickly becoming the Sabres’ greatest weakness.

Tyler Myers’ stunning regression has fans (and certainly the Sabres) fretting. The youngster looks nothing like a franchise defenseman. Four years into his career, Myers was supposed to be a Norris Trophy candidate.

Instead, he’s a mess, committing gaffe after gaffe while contributing little offensively. The 23-year-old looks slow and tentative. His confidence appears shot. Ruff scratched him twice.

Don’t forget, Myers is in the first season of a seven-year, $38.5 million contract.

Veteran Jordan Leopold, once the team’s most underrated presence and its ice time leader, performed brutally before finally getting benched.

The Sabres often run around their own zone, looking like a disjointed, ugly mess. They frequently wilt under pressure, although they’ve been flinching less under Rolston, especially during their three-game winning streak last week.

They’re wasting a terrific season from goalie Ryan Miller, who looks as locked in as ever, stopping almost everything he sees.

Other than a poor outing in a 4-3 overtime loss to Toronto on Jan. 29, Miller has given the Sabres a chance every game. He could be close to his 2009-10 Vezina Trophy level.

Few realize it, though. The Sabres keep offering Miller little support while hanging him out to dry.

During the early portion of the season, the Sabres were scoring three goals a game (a gold standard) and still losing.

There’s at least one bright spot on the struggling blue line, however.

Christian Ehrhoff, a slick, steady presence while skating a team-high 25:01 a game, has been terrific all season.

The feeble offense is too top heavy

The top combination of Cody Hodgson, Jason Pominville and Thomas Vanek has scored 31 of the Sabres’ 60 goals (2.50 a game, 22nd overall). That’s 51.7 percent of the offense from one line. That percentage has actually gone down recently as the trio has cooled off and a few other Sabres have started chipping in goals.

But any true secondary scoring has been nonexistent all season.

With 12 goals and 28 points in 21 games, Vanek has performed brilliantly much of the year. But the law of averages and some nagging injuries have slowed him down. The winger has only one goal and five points in his last 10 games. An undisclosed injury sidelined him for two weekend tilts.

Pominville recently had one point in an 11-game stretch.

Hodgson, meanwhile, has 10 goals and 21 points. Nineteen points have come at even strength. The other two are short-handed.

The 23-year-old hasn’t gone more than three games without a point. He clearly wants to be the Sabres’ top center badly. Just look at his highlight-reel goal late in the Sabres’ 4-3 loss Tuesday in Carolina for proof.

The Sabres have 18 goals from their other forwards, including one from touted rookie Marcus Foligno and two from Drew Stafford, a 31-goal scorer two years ago.

Not surprisingly, the Sabres’ awful power play has converted a pathetic 11.5 percent of its chances (30th overall).

Clearly, the Sabres have overvalued their own talent.

Myers may never reach the next level. Stafford, who has two years left on his four-year, $16 million contract, is probably really a 20-goal man at best. The Sabres don’t trust backup goalie Jhonas Enroth enough to start once a month. They’re burning a year of rookie Mikhail Grigorenko’s entry-level contract as he plays sparingly. Jochen Hecht has one goal after being re-signed prior to training camp.

The trade deadline is creeping up. The players with real value – Miller, Pominville and Vanek – all have one year left on their contracts after this one.

Maybe the Sabres will start improving once Rolston, a respected hockey mind, gets a better grasp of the team and starts putting a greater imprint on it.

But if the Sabres really want to start fresh, they have assets to deal.