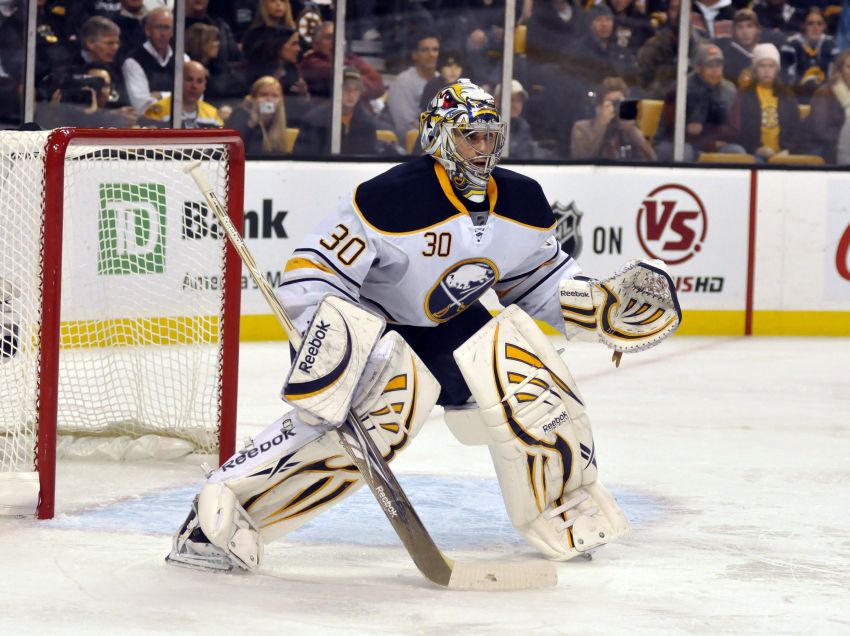 TORONTO – Remember this one. The Buffalo Sabres’ gritty 2-1 triumph over the Maple Leafs on Monday could be their blueprint for success in this lockout-shortened season.

Against a team fresh off a big opening-night win and playing its first home tilt, the Sabres showcased unyielding muscle, capitalized on their few chances early and received splendid goaltending from Ryan Miller before a capacity crowd of 19,475 fans inside the Air Canada Centre.

“We came in and we stole one,” Sabres defenseman Jordan Leopold said. “You look at the shot chart (35-20), you look at the opportunities. They probably had more than us. Millsie made some big saves, (provided a) big turning point for us. Yeah, we battled.”

Miller looked sharp from the get-go, making 13 of his 34 saves during the first period, including some critical stops as the Sabres killed three straight penalties. His big save as sniper Phil Kessel crashed the net and hit him high ignited a melee midway through the contest.

Patrick Kaleta immediately tackled Kessel. Soon everyone had a partner.

Cody Hodgson and Jason Pominville put the Sabres up early.

Still, the Leafs fought until the bitter end. Nazem Kadri’s power-play goal at 18:18 of the third period with goalie Ben Scrivens on the bench gave them life. Moments later, Joffrey Lupul punched an airborne puck past Miller, which the officials immediately waived off.

“Actually, I was just kind of planning for it to be a goal and have to reset my mindset to go into overtime and pull out a win,” Miller said.

Then the Sabres held off the Leafs during some final frantic seconds, ending their five-game losing streak at the ACC, a building they once owned.

“If this was last year, maybe we didn’t get those two points,” Leopold said.

Miller added: “We lost a lot of one-goal games last year. … It’s going to be a tough, tough season for everybody. So get your points while you can.”

A year ago Monday the Sabres lost their 12th straight road game in regulation. But they slowly climbed out of that epic funk, morphing into a complete team.

That’s carried over into 2013. Team toughness, their most glaring weakness last season, feels like an afterthought now. The Sabres answered every physical challenge in their 5-2 season-opening home win against Philadelphia on Sunday and versus the Leafs.

“We learned we definitely have to work together and work for each other,” Leopold said. “(It’s) a different atmosphere in here with Steve (Ott) and big boy (Scott) over there. … We’re sticking up for each other and we’re definitely looking like a team.”

Hodgson’s deflection off his chest opened the scoring at 8:51. He also scored on another odd deflection Sunday, prompting Ruff to crack, “Imagine what’s going to happen when he starts shooting.”

“I was just trying not to get hit in the head,” Hodgson said.

Pominville scored from the right circle 4:51 into the second period, converting a nifty feed from Thomas Vanek.

The trio of Hodgson, Pominville and Vanek has five goals and 13 points through two games.

“I thought OK,” Ruff said about the 18-year-old’s play. “There was times I didn’t get matchup I wanted. There was a couple shifts in the second period where we got hemmed in. But I thought he did a real good job of staying inside the staying out of trouble.”

The Sabres can play Grigorenko three more times before the first year of his entry-level contract kicks in.