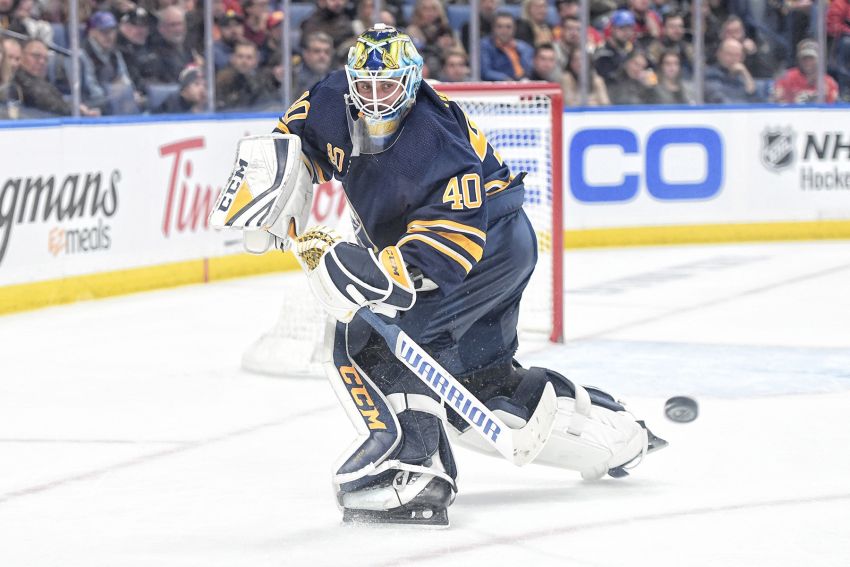 BUFFALO – As soon as Carter Hutton grabbed the puck, the entire Sabres bench stood up. His teammates knew their goalie was eyeing the empty net about 175 feet away.

And for an oh-so-brief second, it appeared Hutton would shoot it down the ice and cap off Thursday’s victory in the craziest of fashions by scoring his first NHL goal.

“My first thought was he was 100 percent going to get it,” Sabres winger Evan Rodrigues said after the Sabres prepared for tonight’s road tilt against the Washington Capitals. “My second thought was I was (ticked) because he fanned on it. He can shoot the puck and that was not his best effort.”

“That would’ve been exhilarating if he got one,” Rodrigues said Friday inside KeyBank Center. “If there’s one goalie that can, it’s definitely him.”

Hutton, one of the NHL’s best puck-handling goalies, kept trying as the final seconds of the 3-1 win ticked down.

“You could see after that, every time they rimmed it or the puck came around, his hand went right to the top of his stick and he was looking for it,” Rodrigues said.

Still, Hutton said he “could care less” about scoring a goal.

Of course, if it happens, Hutton would enjoy it.

“I’d be lying if I didn’t say I would be pumped to score,” Hutton said.

Hutton’s teammates would also be pumped. In fact, they seem more excited about the prospect of a goal than him.

“Everyone was yucking it up,” Hutton said. “We were having a chuckle about it if I would’ve popped it. They were like, ‘What would you have done?’ I don’t know. Maybe skate down the line or something.”

In their long history, only a few other Sabres goalies – probably Tom Barrasso, Anders Lindback and Darcy Wakaluk – have possessed notable puck-handling skills.

In addition to Hutton’s talent between the pipes, his ability to coral the puck and send it all over the ice has helped the Sabres morph from a laughingstock into a contender.

“It’s been every D-man’s dream to play with a goalie who can play the puck like that,” Sabres defenseman Nathan Beaulieu said.

“He’s an extremely good puck handler, he really helps our D out,” Housley said. “You can’t say that last year. This year, it’s been extraordinary where our D are getting back.”

With Hutton stopping and slinging the puck, the Sabres can break out of the zone cleaner and easier and get up the ice faster. His defensemen also track down fewer pucks, eliminating some turnovers and wear-and-tear that retrievals can create.

“It’s just getting back there and giving him a quick out,” Beaulieu said. “It’s tough picking pucks up off the wall or off the glass and ripped hard around, so when he stops it, it makes our job five times easier than it needs to be.”

It also makes the opponent’s job much tougher.

“It’s so hard to play against goalies that can do that,” Beaulieu said. “They get out and stop so many pucks. It just completely screws up your forecheck. It’s been huge for us.”

Hutton said he started developing his puck-handling skills at a young age, shooting pucks in the backyard.

“Just something that became a part of me, took pride in it, right?” Hutton said.

Hutton said he started playing the puck more in junior hockey. At each level, he would keep adjusting.

“The forecheck was harder so you had to simplify it a little bit,” Hutton said. “At each level, you just kind of kept getting better and better and you adapt as you go.”

Hutton said the Sabres want him “to make plays.” But his best plays with the puck are often the simple ones. On Thursday, he said he passed the puck to defenseman Lawrence Pilut, who moved it up to the center and out of the zone.

“Those are the plays you want,” Hutton said.

He added: “I never tried to be too extreme. … The D-men are always better than you at handling it.”