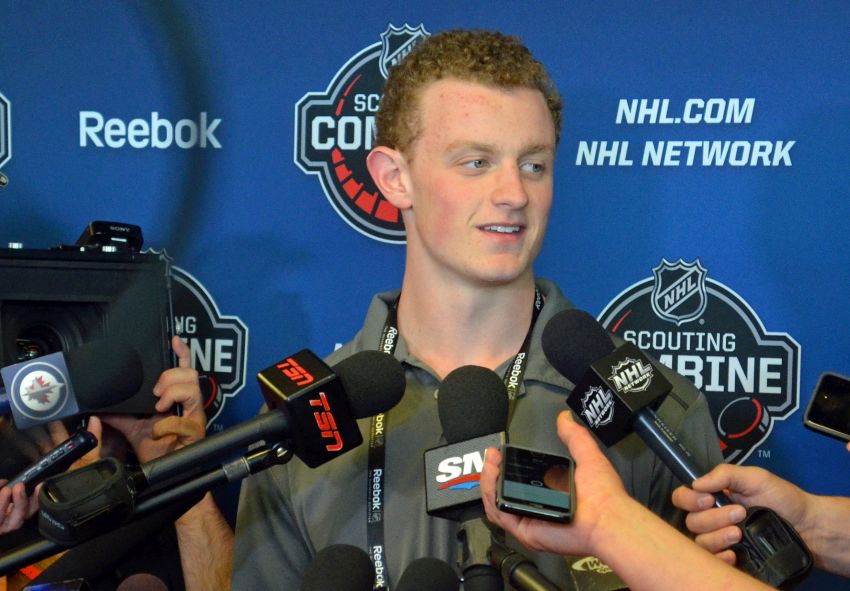 BUFFALO – Jack Eichel, of course, never expected his words would leak out. The superstar was simply expressing some confidence in his special abilities during pre-draft interviews this week.

Eichel told teams, including the Sabres, who will select the 18-year-old second overall on June 26, he plans on being a better player than Connor McDavid, arguably the biggest prospect in decade.

Was it cocky? Sure. But the slick Boston University center wasn’t taking a dig at McDavid. Eichel doesn’t see what all the fuss is about. Neither does Sabres general manager Tim Murray, who confirmed the Boston Globe report on WGR and said he liked Eichel’s words.

“I’m pretty confident in my own abilities,” Eichel told a throng of reporters and cameras Friday at the NHL Scouting Combine inside HarborCenter. “I know everyone’s making a big deal.”

Eichel never intended to compare himself to McDavid, who will be picked first by the Edmonton Oilers.

“It’s more of just confidence in my own self,” Eichel said.

Eichel’s words will only ignite more comparisons between the two youngsters, who have been measured against each other for years. But they aren’t rivals – McDavid played in the Ontario Hockey League – and had never even met until this week.

“It seems like we’ve been linked together forever,” Eichel said. “I guess that’s part of it. You look at a lot of major sports, there’s a lot of comparisons between athletes in every sport.”

McDavid, who has learned Eichel is a “nice guy,” added: “I think we’ll be linked together for a little bit here at least.”

The competition, Eichel said, will be good. Still, it might not begin for another year. Eichel, the 2014-15 Hobey Baker winner as the NCAA’s top player, won’t commit to turning professional yet.

Yes, going back for his sophomore season is still a possibility. Eichel’s decision likely won’t come until after the NHL Draft, he said.

“Nothing’s changed,” he said. “I think I still have a lot of people to talk to. It’s definitely a tough decision to make.”

Eichel has enjoyed visiting Buffalo his week. Locals eager to greet their new hero have welcomed him warmly. He has also spent some time exploring the city.

“Everyone talks about Buffalo’s chicken wings, I got a chance to try those,” Eichel said. “I’m just trying to take it all in.”

Clearly, Eichel’s ready to play in the NHL. The Boston native recently played against men at the world championship, compiling two goals and seven points in 10 games for Team USA.

“It was a great experience for me,” Eichel said. “I think I built a lot of confidence in my game. I think it was a great way to end my season, playing against the best players in the world. I think I learned a lot about my game, too. Going into the offseason, I’m able to look at a lot of things and try to get better at them – things that I need to get better at to be successful at the next level.”

Notes: The combine concludes today with the prospect fitness testing. … Eichel on possibly playing for – “If I end up in Buffalo,” he said – new Sabres coach Dan Bylsma: “He’s a really great guy. I’d be really excited to play for him. He brings a lot to the table. Obviously, he’s coached some of the best players in the world – (Sidney) Crosby, (Evgeni) Malkin.” Bylsma and Eichel have already reviewed video together.