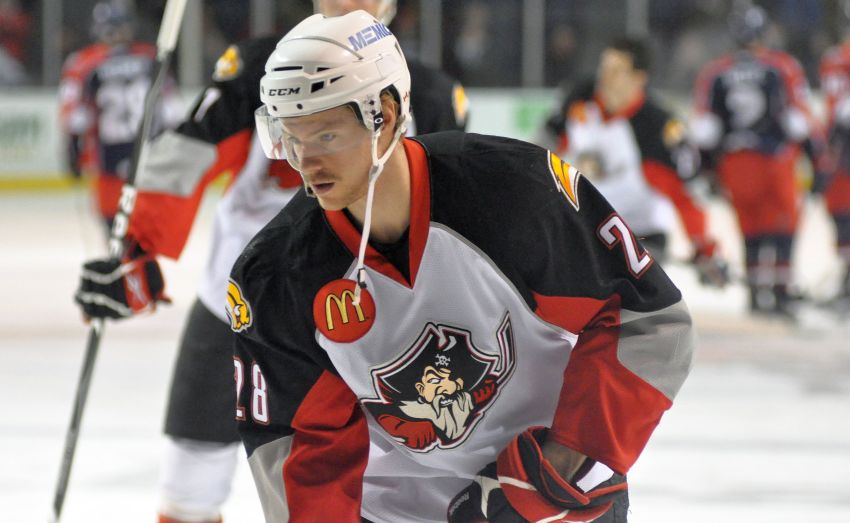 TORONTO – Mike Kostka was one day away from ditching his NHL dream, all set to take a gig playing overseas.

The 27-year-old Maple Leafs rookie couldn’t find any good work in North America. Despite two solid seasons with the Buffalo Sabres’ top affiliate in Portland, the team hadn’t tendered the defenseman a contract in 2010, making him a free agent.

Then Kostka’s friend, an AHL player named Marco Rosa, stopped over Kostka’s home a day before he planned to depart for Germany. Rosa’s visit turned out to be a life-changing experience.

Rosa told Kostka, “If you feel like you have a 1 percent chance of making the NHL, you can’t leave now.”

The words stuck with Kostka. He slept on them and decided to keep pursuing opportunities here. Not long after, Kostka inked an AHL contract with Rochester for the league minimum, $37,500.

In his NHL debut Saturday in Montreal, Kostka skated one tick shy of 23 minutes beside captain Dion Phaneuf in the Leafs’ 2-1 win, recording an assist.

“After looking back at it, it was a pretty special moment for me,” Kostka said Monday prior to making his home debut in the Sabres’ 2-1 win over the Leafs inside the Air Canada Centre.

Following Saturday’s game, Leafs coach Randy Carlyle praised Kostka, saying, “It really is astounding that he hasn’t played a game in the league.”

Don’t apply the overnight sensation label to Kostka, though.

“It’s kind of funny, there was all the talk about, ‘Where did I come from?’ and stuff,” Kostka said. “But obviously I know the journey I’ve gone through and all the hard work that has taken to get here. But for me personally, I’m not surprised that I built up to get to this opportunity and created it for myself.”

Kostka went undrafted by NHL clubs twice as he played NCAA hockey for the University of Massachusetts. Finally, the Sabres signed him in 2008.

“Buffalo was the one that came forward out of college and gave me that opportunity,” Kostka said.

He compiled six goals, 57 points and a plus-12 rating with Portland, seemingly playing well enough to warrant another contract. Instead, a “numbers game” – draft picks Alex Biega and Nick Crawford were joining Portland – pushed him out of the organization.

Kostka insists he holds no hard feelings toward the Sabres, however.

“I was kind of the odd guy out that didn’t have a contract for the next year,” he said. “They needed to clear up space. They were like, ‘Thank you for what you’ve done, and we’re going to move forward.’”

When Kostka landed in Rochester (then Florida’s affiliate), he enjoyed a monster year, scoring 16 goals and 55 points. He was the Panthers’ final training camp cut last season.

Did he ever lose hope he crack the big leagues someday?

“There’s some dark times,” Kostka acknowledged. “There’s a lot of struggles, a lot of pitfalls you go through. I never totally lost hope. I had a lot of people surrounding me that were really supportive and were always there to pick me back up. And I had my own ways of finding inspiration.

“So I wouldn’t say I ever lost it. There were times where you’re like …

“I always had an internal confidence that I’d be able to make it,” he said.

Kostka had another terrific season last year, winning the Calder Cup with Norfolk, Tampa Bay’s affiliate. But he was told he didn’t fit into the Lightning’s NHL plans, so he signed with Toronto.

A strong season with the Leafs’ AHL affiliate – six goals and 34 points in 34 games – earned Kostka a training camp invite when the NHL lockout ended.

“Sometimes in the (AHL) … you have guys that are a little bit older that are playing really well, some of the best players in the league,” Ennis said. “But they don’t get that chance sometimes.”

Kostka finally has his chance.