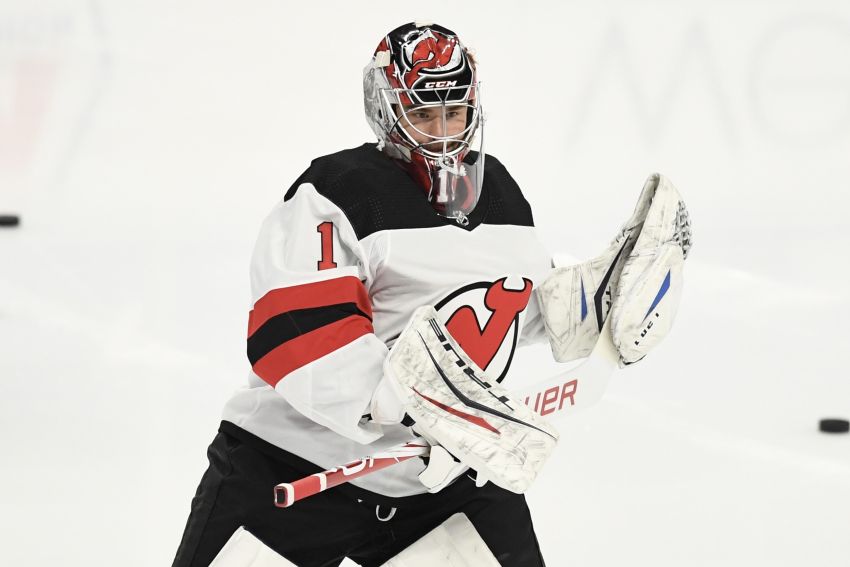 BUFFALO – As free agency approached and the Sabres ramped up their search for a goalie, they did their due diligence on Eric Comrie, a seldom-used but intriguing talent.

Comrie, 27, became a Group 6 unrestricted free agent because he fell 90 minutes short of the minutes threshold. So if he had played another two games, the Winnipeg Jets could’ve retained his rights.

General manager Kevyn Adams said the scouting and analytics staffs and goalie coaches all agreed that Comrie possesses the talent “take the next step” in his career.

“Eric quickly rose to the top of the list for us that this is the guy we want, and we went aggressively at him,” Adams said Wednesday after the Sabres signed Comrie to a two-year, $3.6 million contract, addressing their most glaring need.

Comrie has just 28 games of NHL experience, although he played a career-high 19 times last season. He has appeared in at least one contest in each of the last six years.

“He has a strong – from a numbers perspective – profile and body of work from what he’s done through the American league and then his opportunity from when he has played in the NHL,” Adams said inside LECOM Harborcenter. “He just hasn’t had a ton of opportunity, but for me, this was a goaltender that we feel that is right there on the cusp of taking that step and that’s why he was our guy we were going to target.”

Adams said Comrie, who could split time with Craig Anderson or even earn the No. 1 job, “wants the chance to run with” the opportunity the Sabres present.

“High-character, really well-liked by his teammates, wanted to be here,” said Adams whose other notable move was inking defenseman Ilya Lyubushkin. “That’s a big deal. Looked at this organization as one he wanted to be part of and I get excited when I hear that not just from him but the agent this afternoon.”

Comrie has bounced around the NHL and minors for years, getting claimed on waivers four times. He had two stints with the Jets, the team that drafted him in the second round in 2013, 59th overall. He was also a part of the Arizona Coyotes, Detroit Red Wings and New Jersey Devils organizations.

The Sabres now have three goalies under contract: Anderson, Comrie and Malcolm Subban. Prospect Ukko-Pekka Luukkonen is a restricted free agent and likely ticketed for a return to the Rochester Americans.

“I just wanted to make sure he understood that we believe in him and we see him as a very good NHL goaltender and playing for the Buffalo Sabres, but what we don’t need to do is rush him,” Adams said. “We want to see him continue to get ice time, continue to get his starts, continue to get the reps he needs.”

Adams said the Sabres don’t want to “force anything” with Luukkonen.

Adams said the Finn could play NHL games this season.

“Maybe he does,” he said. “For me, it’s less about that and more about him getting those reps, so when it’s time in Buffalo he’s really ready.”

The Russian spent last season with the Coyotes and Toronto Maple Leafs, recording two goals and 15 points in 77 games.

“Here’s another guy that I loved my conversation this afternoon with his agent, with him, before we signed him that he looked at our team and thought, ‘I think this is a good fit for me and I want to be part of this.’”

Lyubushkin has compiled three goals and 25 points in 211 career NHL contests. He began his career in the Kontinental Hockey League, playing five seasons for Yaroslavl Lokomotiv before joining Arizona in 2018. He briefly returned to Yaroslavl early in the 2020-21 season.