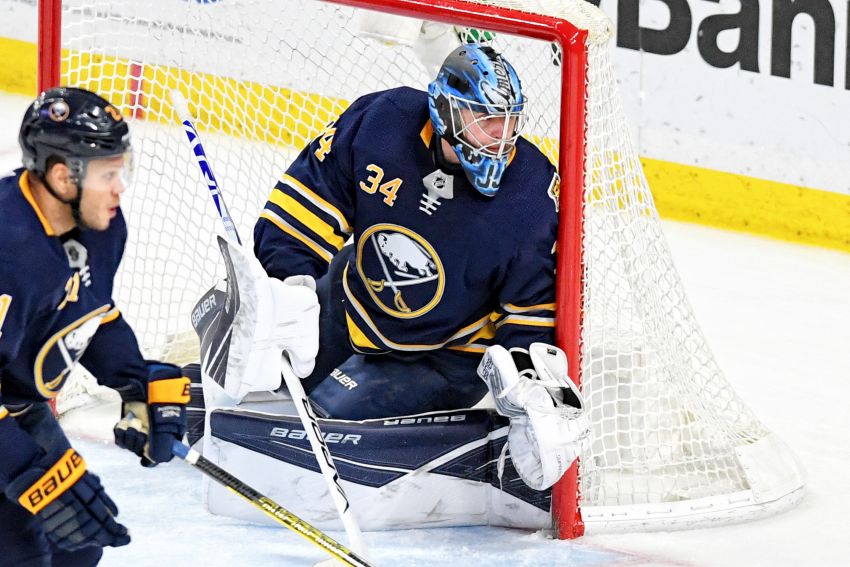 BUFFALO – Face it, the Sabres are playing for pride. Their four-game losing streak has kicked them out of the playoff chase.

So expect them to evaluate and even experiment a bit over the final 16 games, starting tonight against the Pittsburgh Penguins at KeyBank Center.

Under normal circumstances, goalie Carter Hutton would likely face the Penguins. The veteran has beaten them twice this season, including a 41-save performance Feb. 22 in Pittsburgh. He has a 5-1-0 career mark against the Penguins.

“It’s definitely a good test for J.J., to see that evolution,” Sabres coach Ralph Krueger said this morning. “We like the way he’s been joining our group. When you see the maturing process of a player coming for the first time in the National Hockey League, there’s always awe the first day, the first game, the first minutes. He looks a lot more comfortable the last few days being in our environment, being in the group, feeling a part of the team and we’d like to see the confirmation in the net tonight.

“It’s been a good story on him thus far and we want to get a good look at him today.”

The Sabres will also dress the same 18 skaters that played in Tuesday’s 3-1 road loss to the Winnipeg Jets. Forward Michael Frolik and defenseman Colin Miller will be healthy scratches again.

“We’ve got some things we would like to look at here again,” Krueger said.

“As an example, with (defenseman) Lawrence Pilut, to see him with the lessons that he’s learned and to confirm his style and the way he needs to play here with us,” he said. “It’s also seeing (defenseman) Brandon Montour on the right side versus the left and being able to evaluate that.

“Once again, we like the four lines. The compete has been very high in the games. We haven’t had the results, but we like the way the four lines have been operating and we hope to see a confirmation of that tonight.”

In other news, goalie Linus Ullmark, out since suffering a lower-body injury Jan. 28, skated with his teammates again this morning. Krueger said the Sabres hope the Swede can dress for Saturday’s road game against the Philadelphia Flyers.

“We will make that final call tomorrow,” he said. “We like his evolution. He looks like he’s getting comfortable now with the shots here with us and being in a team practice once again. Today and tomorrow should put him in a position to be an option.”

Check back later for more, including a story on Penguins forwards Evan Rodrigues and Conor Sheary returning to Buffalo for the first time since the Sabres traded them Feb. 24.