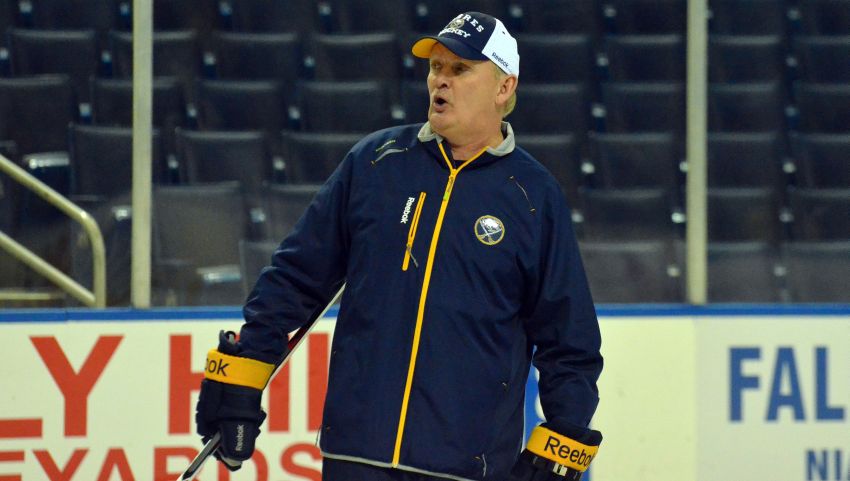 BUFFALO – Like it or not, the Sabres have a stale perception around the NHL.

Coach Lindy Ruff and general manager Darcy Regier have been together more than 15 years without winning a Stanley Cup. Right now, after losing seven of eight, they’re barreling toward a second straight season out of the playoffs. They’ve missed the postseason six times in 10 seasons with much of the same personnel.

So, Lindy, are things getting stale? Would a change of scenery help you?

“When you get in these situations, you try to reinvent a lot of stuff,” Ruff said this morning inside the First Niagara Center. “We went through a process this summer where we met with players and taking a lot of input, traded some ideas. I think we came out of that with some great ideas.

“I think what’s happened I’ve been able to reinvent over the years with different situations from the world championships to the Olympics to sharing ideas with some other great coaches in this league, and I think the attitude with these players has been tremendous right now. The attitude has been upbeat. I know we’ve had some tough losses. But I think if we can battle through this adversity, the players’ heads are in the right place right now to move forward.

“We’ve had a good batch of injuries that I think we’ve proved to ourselves as a team going into Boston that nobody would’ve anticipated what we would’ve done (winning 7-4), and then we laid a giant goose egg in Montreal in the first period (before losing 6-1) , which we have to learn from.”

We’ll find out tonight if the Sabres, losers of three straight, can apply some of their recent lessons against the Montreal Canadiens.

Related: Reeling Sabres searching for answers on ‘off day’