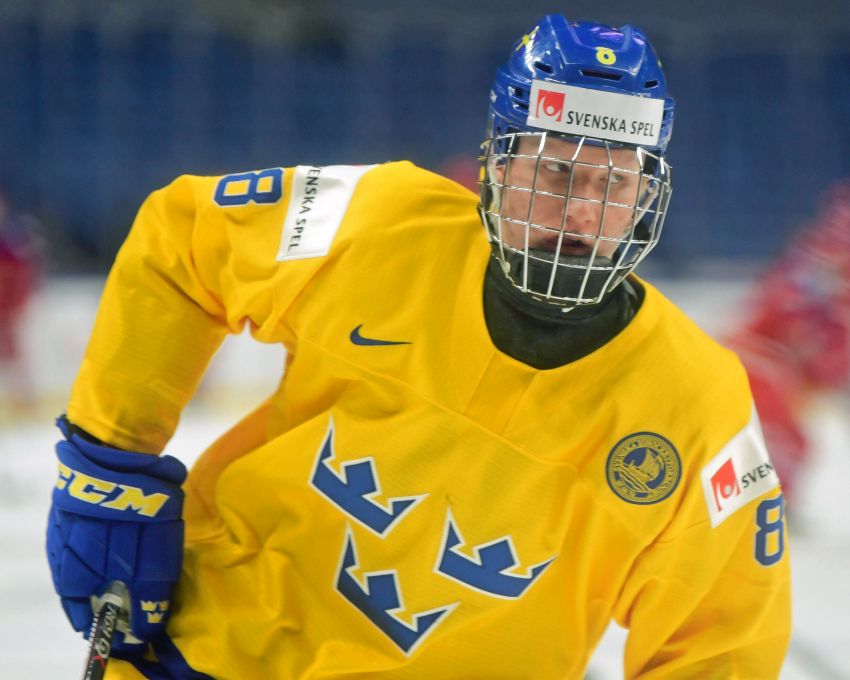 Rasmus Dahlin has the Sabres and their fans excited. ©2018, Hickling Images

TORONTO – With the bounce of a ball, the Buffalo Sabres, one of the NHL’s laughingstocks for years, suddenly became relevant again.

Years from now, winning Saturday’s NHL Draft Lottery could be remembered as a seminal moment in franchise history.

When the Sabres pick Rasmus Dahlin first overall June 22 in Dallas, they will possess arguably the best defense prospect in decades. The Swede has superstar potential. Even at 18 years old – if you want to feel old, Dahlin was born in 2000 – he could radically transform one of the league’s perennial dregs.

“The type of defenseman that pretty much 31 teams in the National Hockey League want these days, just that ability to jump up in the rush and create offense and chances but also have that competitive spirit to play against other teams’ top players,” Sabres general manager Jason Botterill said Saturday inside the CBC building, where the lottery was held.

It’s funny, isn’t it? For two years, the Sabres tried to exploit the system, attempted to win by losing and improve their draft stock by fielding terrible teams and selling off most of their assets.

They finished dead last in 2013-14 and 2014-15 and lost the lottery both times. Tanking obliterated their talent base, created culture of losing and never paid off. They still haven’t emerged from that abyss.

This season, however, the Sabres finished 31st overall on merit. They were awful.

Even with Dahlin penciled in, they still have a lot of holes. They need a proven goalie, more speed on the wings, more defensemen and depth everywhere.

The Sabres have All-Star centers Jack Eichel, 21, and Ryan O’Reilly, 27. Center Casey Mittelstadt, 19, might generate Calder Trophy buzz next season after scoring five points during a late six-game look. Winger Sam Reinhart, 22, was quietly one of the NHL’s top scorers during the second half. The former second overall pick could be primed to hit the 30-goal or 70-point marks.

Adding a talent like Dahlin has positive ripple effects everywhere. He will almost certainly make his teammates better. For years, players on Buffalo’s weak rosters have dragged each other down.

Heck, players might want to – gasp – come to Buffalo.

“We have some good, young players we can build upon,” Botterill said. “We also know … we have an owner in Terry and Kim Pegula that are willing to give us resources to try to bring free agents in. Players see the situation and see that the Buffalo Sabres are moving in the right direction.”

Of course, Botterill knows having a stable of young talent means nothing if they don’t develop it.

“We have a lot of young players that we can mold,” he said. “It’s the same thing with this young player we’re going to bring into our organization. It’s great that we have the No. 1 overall pick, but now it’s up to us to develop it and to make sure that, yeah, he is 18 years old, and for him to achieve all his potential, we have to put him in the right environment to help him get through that process.”

Notice Botterill never mentioned Dahlin by name. The rookie GM wouldn’t say if the Sabres would select him. But make no mistake, Botterill will pick him.

“We want everyone to show up in Dallas,” he joked.

Dahlin’s arrival could mean more Sabres fans show up next season. By the end of a miserable 62-point campaign, fans stayed away in the thousands. Crowds of about 12,000 became normal. Season-ticket purchases were expected to drop.

Botterill experienced the fans’ pain at the quiet KeyBank Center, where the Sabres won only 11 times this season. When they occasionally played well, he could feel the crowd’s excitement.

“I hope they’re ecstatic,” Botterill said of getting the top pick. “Look, they’ve been extremely supportive. You felt it in the building. There was certainly a lot of quietness coming into the games, but whenever we did something well, they wanted to cheer. They wanted to be supportive.”