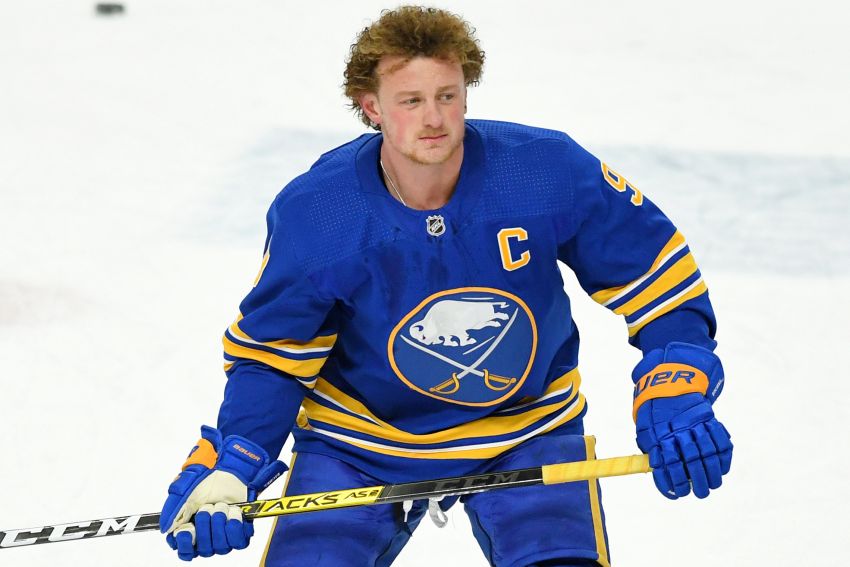 Jack Eichel is frustrated with the Sabres. ©2021, Micheline Veluvolu

Undergoing artificial disc replacement surgery is the best short- and long-term option to repair the herniated disc in Jack Eichel’s neck, according to a Colorado-based neurosurgeon who has examined the Buffalo Sabres captain.

Dr. Chad Prusmack told the “31 Thoughts” podcast that Eichel, who wants to undergo disc replacement surgery, could play six to 12 weeks after having the procedure.

Eichel wants to be traded and said in May he has a “disconnect” with the Sabres over the injury.

“As a doctor, I’ve got to look at the whole picture,” Prusmack said. “I mean, I don’t want to see Jack Eichel because we defaulted to a surgery that he did not want … that when he’s 60 taking care of his grandchildren, he’s had fusions up and down the spine and maybe has difficulty swallowing, etc. And it’s my job to make sure that he not only performs in a safe way but he wants to perform as him. … I have to be his advocate for that.

“And if anyone says that a fusion is better in the long run, they are not telling the truth or they do not know the literature.”

Prusmack said the fact an NHL player has never had disc replacement surgery shouldn’t be an issue.

“I don’t think that’s an argument or you would never make medical advances in any rhyme or reason,” Prusmack said. “This is not an experimental procedure. This is established in literature as being superior to the ACDF.”

Prusmack said the artificial disc is constructed to handle high-impact hockey hits that force the head to whip back.

“It’s made to handle motion, it’s made to handle those movements,” he said. “That’s why athletes do so good with it. In comparison, I will tell you I would be much more concerned if I had a fusion patient that got hit, because that impact is being imparted to the levels above and below, and that is an accelerated risk.”

Prusmack said he would let his own child undergo the procedure.

“This is one of those operations they wake up from surgery and they want to hug you,” he said. “It is extremely safe.”

Perhaps another team would allow Eichel to have the disc replaced. But given his injury and huge contract, trading him will be difficult. He has five seasons left on his eight-year, $80 million contract.

On July 24, general manager Kevyn Adams said he would have “no problem” if Eichel started the upcoming season with the Sabres. On Thursday, Adams further angered Eichel’s camp by saying the Sabres are “in control of this process.”

On Friday, Eichel’s agents responded by issuing a statement to The Buffalo News and The Athletic saying the Sabres are stymieing the 24-year-old center’s career by refusing to let him undergo artificial disc replacement surgery.

“The process is stopping Jack from playing in the NHL,” wrote Peter Fish and Peter Donatelli.

Prusmack said Eichel deserves the opportunity to choose which procedure he wants to undergo.

“And if he chose the fusion, I’d disagree with it, but I’d totally get it and would back him for it because that’s his choice,” he said. “And if he said, ‘You I don’t want to be the first guy in hockey to get this, that worries me.’ You got it. No problem. Then have at it. But that’s not the case.

“The case is this is a smart man with a smart family who’s done his research and he’s a great person. I just don’t know how a job can get in such a way of a person getting the right surgery for their well-being. I don’t understand it.”

Eichel, the Sabres’ most talented player and the face of the franchise, hasn’t played since injuring his neck March 7.