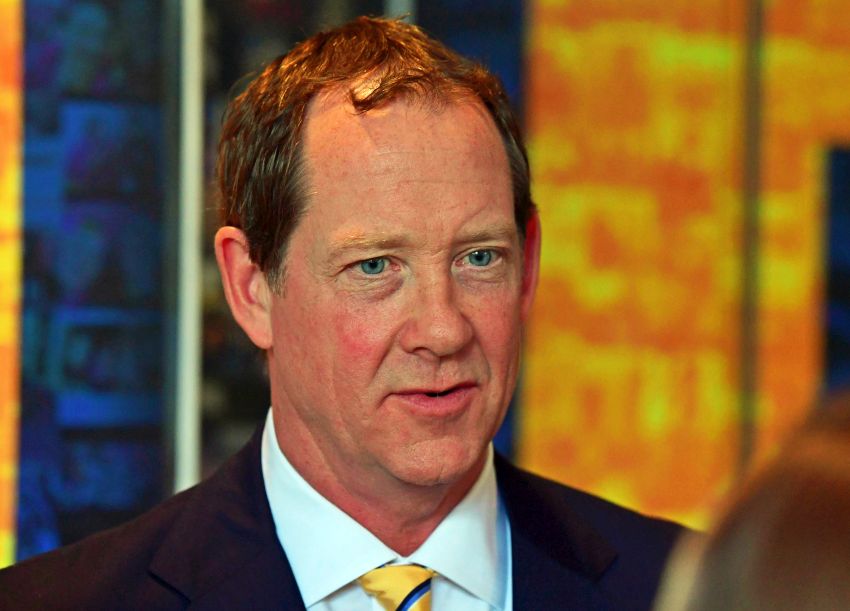 Phil Housley wants the Sabres to get after it tonight. ©2017, Hickling Images, Olean Times Herald

BUFFALO – Come about 7 p.m., just before the Sabres’ preseason opener against the Carolina Hurricanes, rookie coach Phil Housley will start feeling some butterflies.

“I’d be lying to you if I say when the game comes I’m (not) going to be nervous,” Housley said this morning inside KeyBank Center. “Being a head coach for the first time behind the bench, it’s quite exciting for me.”

Housley, a Hall of Fame defenseman, spent 21 years as an NHL player before a four-year run as an assistant with the Nashville Predators. He’s an NHL lifer. Still, he’s never had a night like tonight, his first running his own bench.

The first glimpse of the revamped Sabres, a team Housley has quickly put his imprint on, should be exciting. Housley has implemented a slick five-man attack. Just four days into training camp, the speed on the ice has been noticeable.

Housley wants the Sabres to relax and play aggressively out of the gate.

“I just want to see the execution, and more importantly, I know there’s a lot of things coming at these guys, a lot of information,” he said. “My message is just go out and work hard, don’t hesitate in anything you do. If you make a decision to go, go, and we’ll deal with the mistakes as they come.

“But I want us to play with a lot of speed and attitude tonight. We’ve been working on our pace.”

He added: “When you get a lot of information like, I understand, as a player, you tend to freeze a little bit. We don’t want them to freeze; we want them to be themselves.”

As you would expect from an exhibition opener, tonight’s lineup is a mix of veterans, prospects and some AHL players.

Goalie Robin Lehner will start in goal and be backed up by Linus Ullmark. Lehner could play the whole game, Housley said.

Here are the forward lines and defense pairs from left to right:

Okposo, who was hospitalized in intensive care late last season, will play his first game since March 27. Meanwhile, Pu, a junior scoring star with the Ontario Hockey League’s London Knights, will make his NHL exhibition debut.

Housley said Pu earned his opportunity by standing out in the Prospects Challenge rookie camp tournament before the main camp started.

“He’s a terrific player, really smart, he’s got a little edge to his game, he goes to the net hard,” he said.

Want an under-the-radar name to watch closely tonight? Moses, who scored a KHL-record 36 goals with Jokerit Helsinki in 2014-15, returned to North America this season on an AHL contract.

“Stevie’s a tremendous skater, he’s got tremendous speed, and he fits well in our system,” Housley said. “I really like his attitude these last few days. He’s been playing with a chip on his shoulder. He’s got to continue to do that if he’s going to get more ice time and get more games.”

Housley knows Moses from his short stint in the Nashville organization in 2015.

“It’s something we can build around as a group,” he said. “The Buffalo represents everything we want to be, fast and powerful.