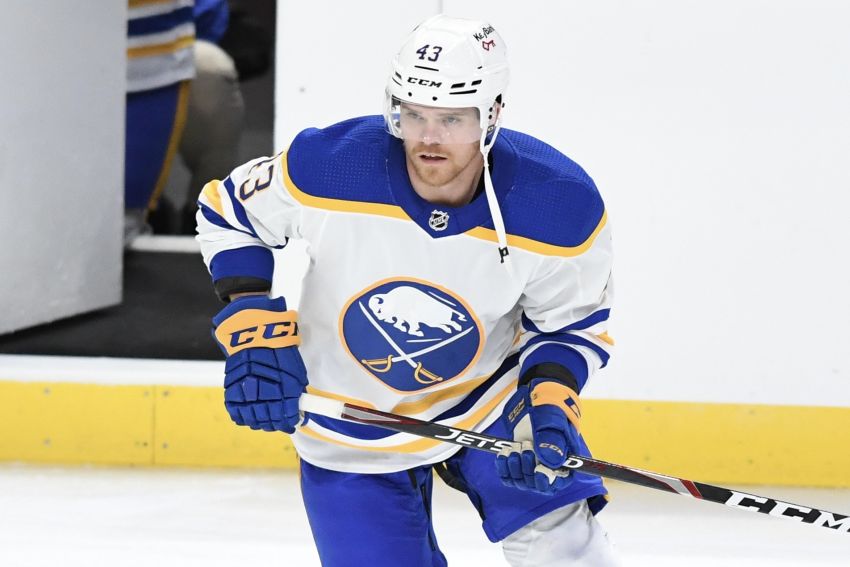 The Buffalo Sabres on Wednesday rewarded Sean Malone for his breakout year with the Rochester Americans, re-signing the center to a one-year, $750,000 contract.

A stint in COVID-19 protocol and a lower-body injury that required surgery combined to sideline Malone 30 straight contests early in the winter. If he had stayed healthy, he likely would’ve played some NHL games when COVID and injuries ravaged Buffalo.

Malone, a sixth-round pick by the Sabres in 2013, 159th overall, will likely be a strong recall candidate next season or compete for a spot in Buffalo during training camp.

The West Seneca native played one game for the Sabres late in 2016-17 after signing his entry-level contract. He also made one appearance for the Nashville Predators in 2020-21, recording an assist.

Malone often battled injuries early in his career, and after playing just 38 times for the Amerks in 2018-19, he received an AHL contract instead of a two-way deal.

The Harvard graduate enjoyed a comeback season in 2019-20, registering 12 goals, 30 points and a plus-15 rating in 58 games. But after the Sabres fired general manager Jason Botterill, he decided he wanted a fresh start with a new organization.

Malone spent most of 2020-21 with the Chicago Wolves, Nashville’s temporary AHL affiliate, compiling five goals and 15 points in 23 games.

An opportunity to perhaps earn more NHL action helped lure Malone back to the Sabres organization last year. He knows Sabres coach Don Granato well, having played for him at the U.S. National Team Development Program in 2012-13.

The NHL on Wednesday announced the order of selection for next week’s draft in Montreal. The Sabres have 11 picks, including three first-rounders.

GM Kevyn Adams and director of amateur scouting Jerry Forton are scheduled to meet the media this morning to discuss the draft.

Hamburg’s Quentin Musty was one of four Buffalo-area players on Wednesday named to the U.S. Under-18 Men’s Select Team that will compete in the Hlinka Gretzky Cup later this summer in Red Deer, Alberta.

The Dallas Stars on Tuesday re-signed Youngstown’s Joseph Cecconi to a one-year, two-way contract worth $750,000 in the NHL and $150,000 in the AHL, according to capfriendly.com.

Cecconi, 25, recorded one goal, 16 points and 52 penalty minutes in 65 games with the Texas Stars last season.

The defenseman has compiled four goals and 31 points in 164 career AHL outings.