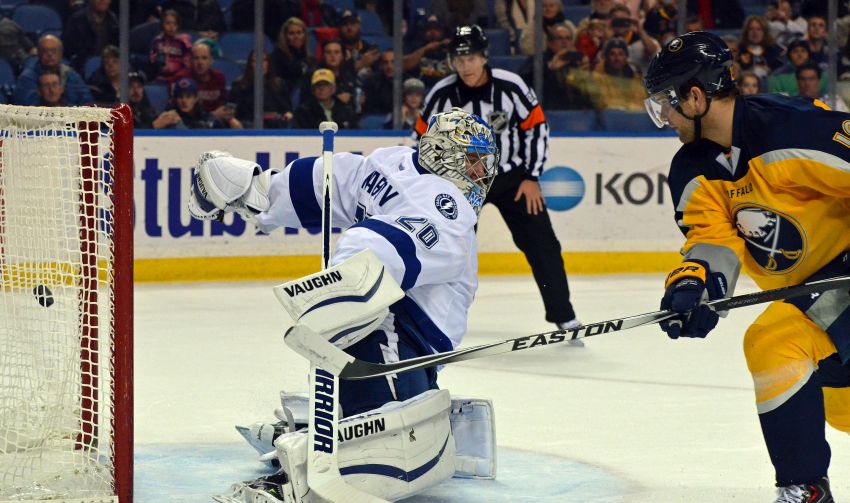 BUFFALO – At this rate, Sabres center Zemgus Girgensons, the NHL’s 119th-leading scorer, will be an All-Star later this season.

Latvians have seemingly been voting non-stop for their favorite player online, helping the 20-year-old open up a stunning 158,994-vote lead. Montreal’s P.K. Subban is a distant second with 240,362 votes. Girgensons has a whopping 399,356 votes!

But if the tenacious Girgensons, who has only 16 goals in 95 NHL games, can’t get an invite to game from voting, he might earn a spot based on merit.

He scored another clutch goal Tuesday in the Sabres’ 2-1 shootout win against the Tampa Bay Lightning, tying the game with 3:54 left in regulation.

“We just have the best fans in the world,” said Girgensons, who tries to downplay any hubbub about the voting.

Girgensons’ exploits have helped buoy the Sabres to six wins in their last seven games, including three straight victories versus elite opponents.

Why use the struggling Hodgson, who has only one goal and two points this season? Sabres coach Ted Nolan said his “gut” made him.

“I thought last couple games he’s getting better, he’s having some chances,” Nolan said. “Maybe this is one of those things that will put him to the good side.”

Tuesday’s triumph before 17,782 fans inside the First Niagara Center was another statement victory for the surging Sabres. A month ago a high-powered opponent like the Lightning would have likely blown them out.

“Obviously, the confidence is a little bit higher now,” Enroth said. “We beat a couple of great teams the last couple games. We know we can beat every team in the league, especially beating Montreal back-to-back. We just been trying to build on that momentum.”

Tampa Bay began Tuesday with a league-high 36 points and 90 goals.

“I thought overall tonight our 60-minute game was one of our better games,” Myers said. “We’re starting to play the right way, play the way we need to be successful.”

The Lightning had only one shot most of the first period and managed just two overall. In the second period, they pumped 16 on Enroth.

Nolan added: “I don’t know if we backed off or they turned it on in the second period. We found our footing in the third. To play a team like that, beat them 2-1, hold them to one goal, is pretty impressive.”

Ondrej Palat scored 9:52 into the third period, connecting on a nifty pass from Tyler Johnson in front.

But for the first time this season the Sabres won after getting scored on first.

“Part of getting better is that resilience, just keep going, you never know what’s going to happen,” Nolan said.

Girgensons might be the most resilient player on the ice.

“Gussy’s been that way since he entered the organization,” Myers said. “He’s an extremely hard worker, and I think that goes to show why he’s having the success he’s having.”