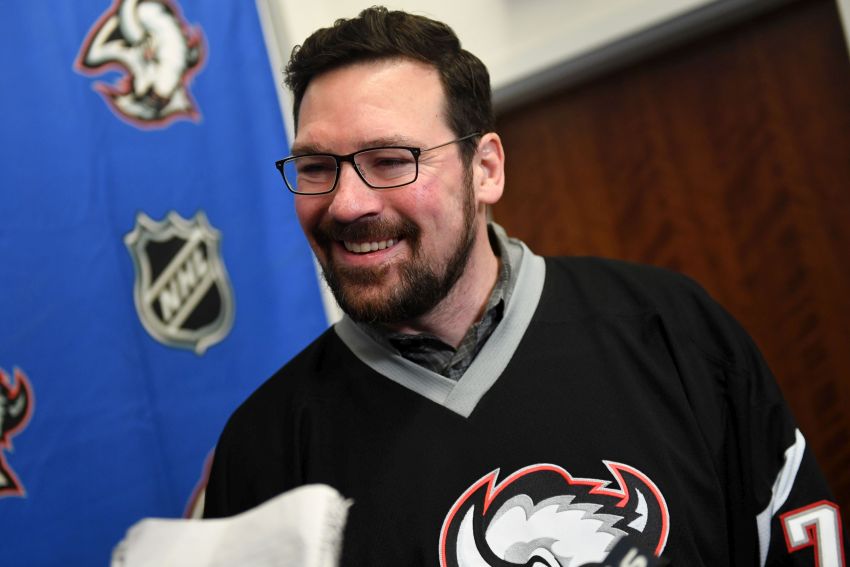 BUFFALO – For the second straight game, Sabres winger Dalton Smith skated in the pregame warm-up before being scratched.

On Monday, the Sabres signed Smith to an NHL contract and promoted him from the Rochester Americans. After 400 minor league games, the tough guy made his NHL debut Tuesday, skating 86 seconds in a 6-4 loss to the Tampa Bay Lightning.

“It kind of came out from left field,” Primeau said of his nephew being joining the Sabres. “I mean, I don’t think anybody was really expecting it. So when we got the news, we were all ecstatic, super happy for him.”

Smith cleared waivers Friday but stayed with the Sabres.

The Sabres wanted the 6-foot-2, 206-pound Smith to play against the Lightning, a team they had let push them around earlier this season.

“He’s a big, strong kid,” said Primeau, who played 774 NHL games. “He’s worked really hard to give himself a chance to get an NHL game. We’re super happy for him, because he never gave up, he never quit. He’s the ultimate team guy.

“He might not score a ton of goals for you and stuff, but you ask any player in the Rochester dressing room and the guys that are up here that played with him in the past, he’s a great team guy and will do whatever it takes to help his team.”

The Sabres introduced 19 players from the 1990s on the KeyBank Center ice before the game.

Dave Hannan walked out carrying a No. 10 Dale Hawerchuk jersey. Hawerchuk, a Hall of Famer who spent five years with the Sabres, is battling stomach cancer.

When former captain Michael Peca was introduced, he took off his black No. 27 Sabres jersey and revealed a white No. 27 Tre’Davious White Bills jersey.