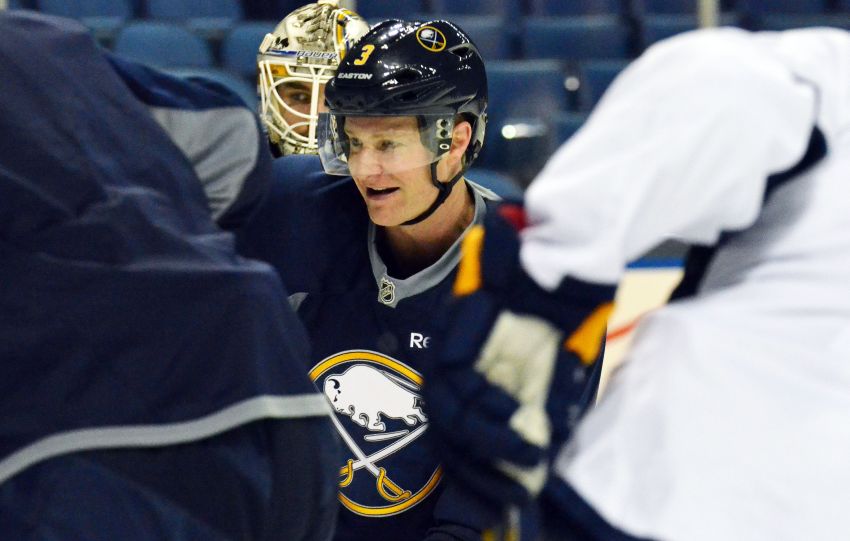 BUFFALO – Jordan Leopold walked into the dressing room following a long skate this morning, began taking off his equipment and noticed a few reporters waiting to chat with him.

The struggling defenseman was the last player off the ice for a reason.

“You guys smell blood or what?” joked Leopold, who will sit as a healthy scratch tonight against the Winnipeg Jets inside the First Niagara Center.

Leopold, a team-worst minus-7, has never been benched during his three seasons here. The 32-year-old knows he deserves to sit, though.

“I haven’t got off to a good start,” Leopold said. “You look at it, I’m trying to get my confidence up, trying to get into plays. … It’s the little things, not really the big things that have been getting me a little bit this year. But it’s not the first time I’ve ever sat and watched a game. You learn from it and it creates a fire underneath you and urges you to get better.”

Rookie T.J. Brennan will replace Leopold, his sixth appearance this season and first since Feb. 9.

“I’ve talked to Jordan recently, probably three or four games ago, about improved play,” Ruff said. “I thought we got a couple pretty strong games. But last game, I expect more out of a veteran defenseman. He’s going to have to work hard to get back in now.”

Leopold acknowledged Dupuis’ goal was “an easy read for me.”

“Having that one sneak by, there’s nobody to fault but myself,” he said. “You look at it, you learn from it, and Lindy’s got to make his choice with lineup. We’ve got eight D here. Sometimes you find yourself out.

“I hate to say it. It’s cliché. But you have to learn from it, you have to move on. You can’t look in the rearview mirror. You have to look forward.”

“I was upset with myself the whole day,” he said. “I didn’t have a real good day because I know we could’ve easily won that game. I’ve played a lot of games in the league. … That’s a blown coverage. Of course, you say it’s a five-man group. But that’s a pretty easy read for me and didn’t end up making it. That’s not the first time this year. It’s happened a couple times.”

Meanwhile, Brennan, who possesses a booming shot, will anchor a point on the struggling power play beside Jason Pominville and take regular shifts beside Mike Weber.

“It was one thing I really wish I capitalized,” Brennan said. “The good thing is the chances are there. … I’ve been thinking about that game since I played it. I made my peace with it. But I just got to capitalize when I get those chances.”

In other news, winger Drew Stafford, who has one goal this season, skated on the fourth line this morning with Cody McCormick and John Scott. Patrick Kaleta replaced him beside Ennis and Foligno.

“There’s an inside part to his game that’s getting a little bit better,” Ruff said. “When he’s going well, you noticed his skating, you notice the winning of the majority of the one-on-one battles. When it isn’t going well, we’re not winning those battles. I didn’t think he was quite up to speed with his skating the other night and lost on some battles that I thought were key battles inside the game. It’s something that we’ve talked about.