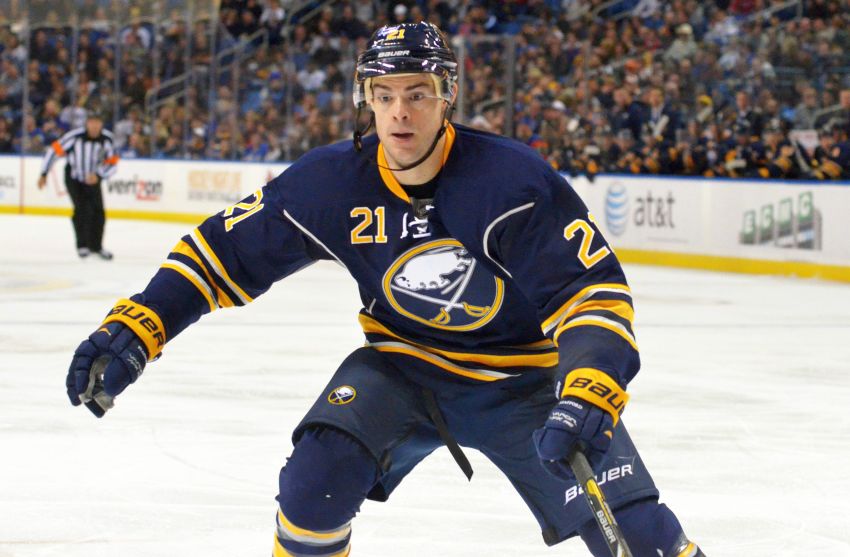 Drew Stafford has only one goal this season. ©2013, Dan Hickling, Olean Times Herald

BUFFALO – Drew Stafford started shaking his head. The veteran winger paused before answering a question about seeing so many teammates and friends depart the hapless Sabres recently.

With Thomas Vanek gone, only goalie Ryan Miller’s tenure outranks Stafford, who joined the Sabres early in 2006-07. When the 28-year-old looks around the dressing room these days, he mostly sees young, unfamiliar faces.

“It’s just times have changed, you know?” Stafford said last week inside the First Niagara Center. “A little bit of a changing of the guard. It’s bound to happen sooner or later. Right now, we’re full speed ahead in a rebuild. Yeah, it’s definitely a little weird looking around. But slowly over the years, losing a lot of great friends, some great teammates – they’re just getting younger and younger.

“But … it was bound to happen sooner or later. We’re in one right now. It’s a process, but you can only go up from here.”

The bottom-feeding Sabres, losers of four straight, begin their three-game road trip tonight in San Jose against the Sharks with an NHL-worst two wins and five points.

While the rebuilding Sabres’ youth has certainly hurt them – they’re already the first team to play four teenagers in a season since 1995-96 – most of the remaining veterans have performed poorly.

Stafford has just one goal and three points through 16 contests, an awful five-goal, 15-point pace for an 82-game season.

The Milwaukee native compiled seven goals and 16 points over a torrid 10-game stretch to end March 2012.

But Stafford, who’s in the third season of a four-year, $16 million contract, hasn’t done much since then. He mustered only six goals and 18 points in 46 games last season.

So far, Sabres coach Ron Rolston hasn’t scratched Stafford, something he did twice in 2012-13. But a benching might be in the works if he doesn’t start producing.

Rolston has mostly been skating Stafford on the fourth line. In last Monday’s 4-3 loss to Dallas, he played only 6:13, his lowest total in years. He skated with Cody McCormick and Ville Leino in Saturday’s 6-3 loss to Anaheim.

“It’s just about sticking with it, wherever I’m at in the lineup, making sure I’m working, winning my battles, just doing my best to be hard to play against,” Stafford said. “You have to respect what Ron’s doing with the lineup.”

At the end of September, Stafford spoke optimistically about the upcoming season, saying he felt “refreshed” following his “nightmare” season and the “future is definitely bright here in Buffalo.”

Obviously, this season has been much tougher than Stafford expected.

“We’ve won two games, one regulation win,” Stafford said. “Losing is not fun. There’s nothing fun about it. It’s a constant struggle. It’s a constant battle to try to stay positive and stick with it, and in this case, obviously, record-wise, I haven’t lost this much ever before, really. So it’s definitely new for me.

How long will the Sabres stick with Stafford? Rumors swirled prior to last season’s trade deadline they would deal him. Given their focus on youth, Stafford’s limited production and a $4 million salary, the Sabres would probably like to trade him.

Of course, they might have trouble finding a taker.

“You got to ignore the noise,” Stafford said. “It’s part of the business. There’s going to be stories out there. It’s part of our job to answer those questions.”

Stafford said last season and during training camp he wants to stay and be a part of the solution. An arduous month hasn’t changed his mind.

Rolston told reporters in San Jose rookie winger Joel Armia, out since breaking his hand during the preseason, will join Rochester to practice.

One thought on “Struggling Drew Stafford sad to see teammates leave, wants to stay with Sabres: ‘I’m not going to quit’”