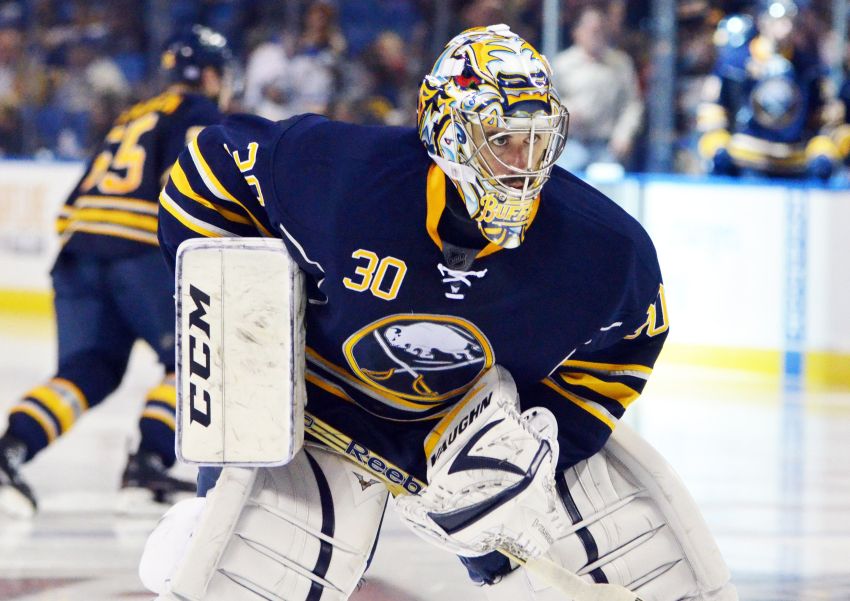 BUFFALO – As a goalie, Ryan Miller has learned, often the hard way, the bulk of his duties are confined to one area – the blue crease he patrols about 65 times a season for the Sabres.

For years, the game’s other aspects consumed Miller, hurting his play. Now, the 33-year-old knows those elements “are beyond my control.”

“I can’t do other parts of the game on the ice,” Miller said last week. “I can only do my part.”

Still, refining his focus wasn’t easy. Miller said he battled and fought with it.

Ten games into a forgettable season, Miller has been the Sabres’ MVP, one the few bright spots on the awful 1-8-1 club.

Despite facing a ridiculous 37 shots a game, Miller’s dazzling most nights, keeping the hapless Sabres in most contests.

Through seven appearances, he’s sporting a slick .926 save percentage, three points below the career high from his dynamic 2009-10 Vezina Trophy campaign. Of course, thanks to some awful play in front of him, Miller’s also 1-6 with a 2.73 goals-against average.

“The way he’s playing, it’s pretty amazing to see,” Sabres defenseman Tyler Myers said Monday after practicing inside the First Niagara Center. “It’s probably the best goaltending I’ve seen him play since I’ve been here. He’s keeping us in games right now, giving us somewhat of a chance. We need the guys in front him, all of us, to step up for him.”

So far, a “really focused” Miller has been showcasing a tighter style in the crease, Sabres coach Ron Rolston said.

“He’s using his size effectively, he’s reading the play,” Rolston said. “That comes from his focus and preparation, which started through the summer. His mindset coming into the year has been to be focused on … what he can do for the team and controlling that, and not controlling anything else except for how he plays. He’s been terrific for us.”

Miller said he’s trying to see the puck “in a calm and relaxed way.” Changing his summer training – he spent more time on the ice – has made his timing better earlier.

“I think I was coming around to timing where maybe it took me a month or two longer last year,” Miller said. “I’m just trying to keep building on that, keep finding things that I can put into my game to make things a little easier on myself and make good reads.”

If the Sabres ever start supporting Miller better defensively and scoring a bit more – they have 12 goals, a paltry 1.2 a game – then, naturally, some wins might follow.

“We could do a little more on our end to make sure he doesn’t have to be spectacular every single night, same with (backup Jhonas) Enroth when he’s in,” Sabres forward Cody McCormick said. “He’s making these huge saves for us, and at the same time, we turn around, we give it right back to them, and he’s got to make another save.

“It’s on us to see something, use the energy that the goalie’s putting out and to generate something with it.”

“They’re giving us a chance every single night,” Ott said. “ … Some of these games might be blowouts without them. The hard part is we need to give them more. We need to execute in front of them. We need to push forward in front of them because they’re holding up their bargain. They’re assets.”

Myers believes the Sabres will cut down on the shots against once they start playing their system “the way it’s meant to be played.”

“We’ll in turn hold onto the puck a lot more, giving him less than 40 shots a night,” Myers said. “But I don’t think it’s a matter of something we can do to help Millsie out. We want to help Millsie out, but we want to do it in a way that we’re playing our system a lot better so we can control the puck more.”

“There’s a lot to play for in his life right now, like all of us, but especially in his life, what he’s going through,” Ott said. “If it’s Olympics, if it’s contract, if it’s shutting up naysayers or media people, he’s always proven everybody wrong. He’s such a world-class goalie.”