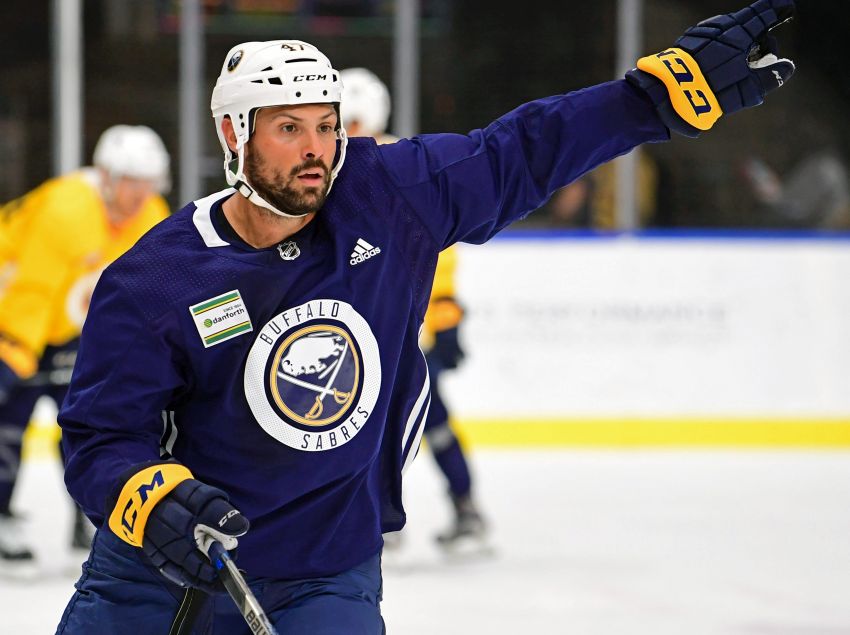 BUFFALO – Sabres defenseman Zach Bogosian loves jumping in the rush and utilizing perhaps his most underrated asset, his skating.

“Unfortunately, the last two years in Buffalo I haven’t really had that role,” Bogosian said Saturday following practice inside HarborCenter.

That time span, not coincidentally, was Dan Bylsma’s run as coach. Part of Bylsma’s downfall, of course, was his reluctance to showcase a fast, attacking style.

Following a solid first year under Bylsma, Bogosian, 27, endured perhaps his worst NHL season in 2016-17, losing more than two minutes of ice time a game as he struggled to find a role.

“I was frustrated,” Bogosian said of a campaign in which he scored a career-low 11 points in 56 games. “That’s in the rear view now.”

These days, Bogosian looks refreshed by the team’s new regime. Sabres coach Phil Housley, a Hall of Fame defenseman, is implementing an aggressive five-man attack during training camp, meaning his defenders will be active.

“I’m looking forward to getting up in the play and making sure I’m that second layer of offense,” Bogosian said. “He wants us to get up there. Everyone that’s playing defense on our team can skate, so it’s going to bode well for us.”

It might bode well for Bogosian, the third overall pick in 2008, the Sabres hired Housley, an assistant with the Nashville Predators for four years. If anyone can unlock his potential, it might be Housley, “a hell of a player in his day,” according to Bogosian.

“The guys were pretty excited over the summer when they hired Phil,” said Bogosian, who likes to pick Housley’s brain.

Housley, whose 21-year playing career spanned from the wide-open 1980s to the clutch-and-grab early 2000s, has adapted to the modern game, Bogosian said.

“He seems to be part of that new group with the skating and getting up in the play on the offensive side of things,” the Massena native said. “Guys are looking forward to playing that style.”

Clearly, Bogosian is energized for his 10th NHL season. Through two days of camp, Housley said “he’s doing all the right things out there,” leading skates and helping younger players.

“He’s in great shape,” Housley said. “You can see him out there, he’s explosive, he’s enjoying himself.”

He added: “He can be part of the rush. I can definitely see him pinching down walls and keeping pucks in, and when you say that, it means you have to get up ice.”

Bogosian saw the ice plenty this summer in Minnesota. He liked the area so much he bought a house on Lake Minnetonka. With so many NHL players in the Minneapolis-St. Paul area, workouts became easier. Bogosian said he skated more than he ever had during the offseason.

But Bogosian probably hopes he doesn’t go home until late in the spring. Incredibly, 534 games into his career, he has never played an NHL playoff game, the league’s longest streak.

“Extremely bad,” Bogosian said of his desire to make a postseason appearance. “It (stinks) when you’ve had long offseasons your entire career. I want to play. I feel like that style of play will suit me well, the physical style.”

In Bogosian’s three seasons in Buffalo, the Sabres have finished 44, 12 and 17 points out of the playoffs. In that time, his ice time has dipped from 26 minutes, 34 seconds a game to five ticks over 20 minutes last season, his lowest total since his rookie season.

“It’s been frustrating the last few years in Buffalo,” he said of missing the playoffs. “We’re getting sick of not making the playoffs. There’s no way of getting around that. It sucks when you’re sitting around watching good teams that you know you can try to compete with.”