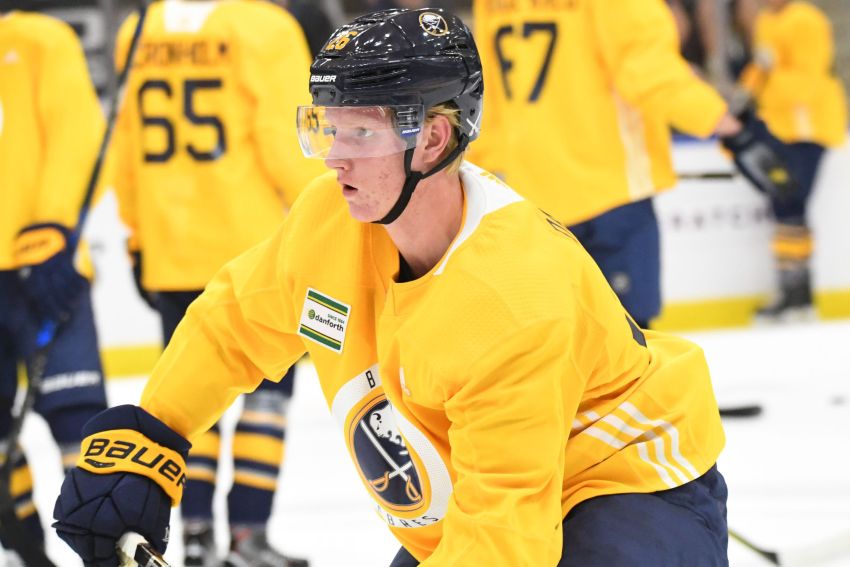 Dahlin, 18, started with Jake McCabe before moving beside Casey Nelson, acquitting himself well with both.

So why move Dahlin for tonight’s tilt against the Calgary Flames? Wouldn’t some stability benefit the first overall pick?

Sabres coach Phil Housley said he partnered Dahlin with Ristolainen to give the talented neophyte “more of a veteran presence.”

Dahlin has no problem skating with Ristolainen, the Sabres’ top defenseman for years.

“All the guys on the team are easy to play with, like I’ve said 100 times,” Dahlin said inside KeyBank Center. “He’s very skilled and good in the D-zone, so it’s going to be great.”

Housley said McCabe, who suffered an upper-body injury in Saturday’s 5-4 overtime loss in Columbus, is a game-time decision. McCabe skated as an extra this morning with forward Evan Rodrigues, a strong sign he could will sit.

Update: McCabe isn’t on the ice for warm-ups.

Sabres defenseman Nathan Beaulieu, who missed time with an undisclosed injury before becoming a healthy scratch, told the Times Herald he will play tonight. Beaulieu has missed the last four games.

Check back later for a story on Beaulieu.

Meanwhile, Sabres winger Tage Thompson, who turns 21 today, will make his second straight appearance after sitting out three straight contests. Thompson recorded an assist, his first point this season, against the Blue Jackets.

With Thompson playing, Rodrigues will be scratched.

Sabres goalie Carter Hutton will start, his ninth nod this season. David Rittich will oppose him, the fourth straight backup the Sabres will face.

– If the Sabres hit the four-goal mark again tonight, it would be the first time they’ve scored at least four times in five straight games since Feb. 20 to March 2, 2007.