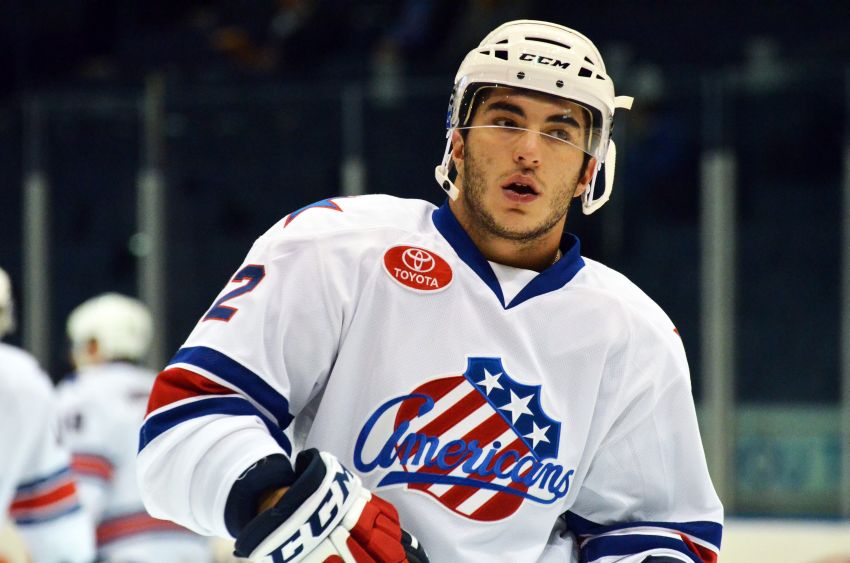 BUFFALO – The thinking was the Sabres, with eight defensemen at their disposal, would likely send one to Rochester.

Sure enough, they assigned rookie Brayden McNabb to the AHL with forward Kevin Porter, who’s finally healthy after getting hit into the boards Dec. 21.

But in a surprising move, the Sabres also recalled a youngster Wednesday afternoon, center Phil Varone, the Americans’ leading scorer. The 23-year-old prospect will likely play tonight against the Carolina Hurricanes inside the First Niagara Center.

Varone has never played in the NHL or even in an exhibition contest. But he’s impressed this season, compiling eight goals and 33 points in 38 games with the Amerks.

“Phil’s one of those guys I think gets overshadowed a bit, just in terms of he wasn’t a draft pick within the organization,” Sabres forward Matt Ellis, Rochester’s captain earlier this season, said in November. “So right off the bat he’s got to work for everything he gets. Phil’s really built his game. He’s a real dynamic player with a great skill set, great vision. Another player I think really has put himself on the map.”

“The onus was on me to have a good summer, come back and show that I’m still capable of being a great player in this league,” Varone said in November. “Hopefully, if I do get an opportunity to go up, to be an impact player in the NHL.”

Now he has a chance.

In other news, interim Sabres coach Ted Nolan said defenseman Mark Pysyk, a scratch for Tuesday’s 4-3 loss to Florida so he could rest, “was banged up a little last game.”

Pysyk could get sent to Rochester soon so he’s eligible to play during the Olympic break.