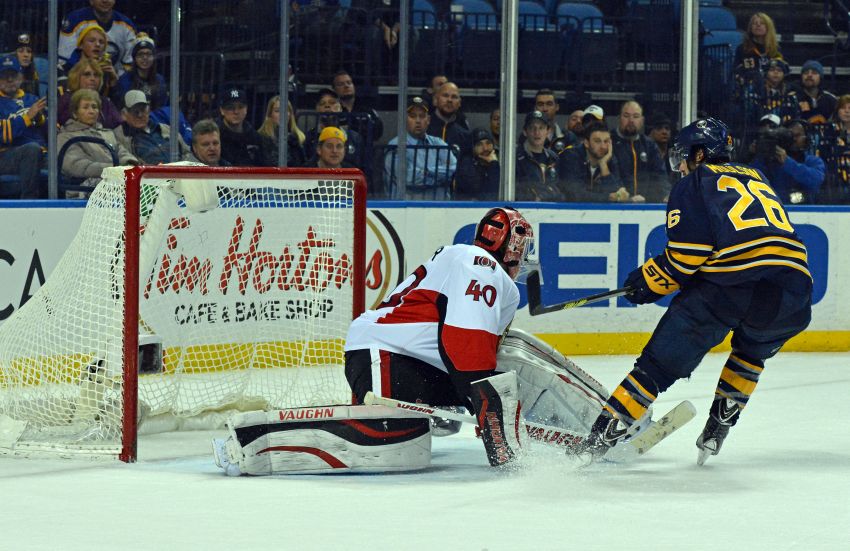 BUFFALO – Monday’s exciting 5-4 come-from-behind shootout victory against the Ottawa Senators extended the Sabres’ winning streak to four games. That’s 10 triumphs in their last 13 games. The surging team has rallied from third-period deficits in five of its last six wins.

In one month, the Sabres have morphed from a hapless team destined to finish last again into a legitimate playoff contender.

“We got something special going,” said Sabres center Marcus Foligno, who scored for the third straight game.

Following Monday’s win before an announced crowd of 14,578 fans inside the First Niagara Center, the Sabres are just four points out of the Eastern Conference wild card spot.

“It’s awesome,” Sabres winger Tyler Ennis said. “Four points, though, is tough to make up in this league. We’re doing a great job as a team right now. We’re learning. We’re growing as a team. We’re gelling. We got to keep winning.”

The have quickly become a wildly entertaining team with a penchant for some dramatic comebacks.

Down 4-3 after Alex Chiasson’s goal 5:04 into the third period, they rallied again, getting a Brian Flynn goal at 16:31.

Matt Moulson then scored the shootout’s lone goal to secure the Sabres’ 13th victory this season.

The win was costly, however. Torrey Mitchell left the game after blocking Erik Karlsson’s shot early. The center, one of the Sabres’ unsung heroes this season, returned but left after the first period. He will likely miss tonight’s game in Winnipeg against the Jets.

The Sabres have recalled center Mikhail Grigorenko from Rochester. The Russian, the 12th pick in 2012, hasn’t played an NHL game since Nov. 27, 2013.

For the second straight game, the Sabres went up two goals and appeared in total control.

After Bobby Ryan opened the scoring, they roared back with three second-period goals, including scores 32 seconds apart to put them up 3-1 against the Ottawa Senators.

Rasmus Ristolainen’s goal, just Sabres’ seventh power-play score all season­, tied it 4:11 into the second period. Then Moulson scored at 7:00 and Foligno followed at 7:32.

The Sabres have 12 goals in the last three games, as many as they scored in their first 11 contests.

“We’re starting to get contributions from everyone,” Sabres coach Ted Nolan said. “On any given shift, someone can get one for us. We’re not looking for one line or one set of defensemen, it’s a whole team, which is a good sign.”

Mark Stone tied it later in the second period. But these days, the Sabres don’t flinch.

“I think it’s one of those things where you turn the corner and you just hope you keep taking off,” Foligno said. “It’s been a while since the feeling has been like this in this room, where confidence is high and you’re getting a lot of production from different lines, where before it wasn’t there. It’s just positive energy. It takes a while to build something here.”

The Sabres, who didn’t win their first home game until Nov. 2, have now won six straight at the First Niagara Center, their longest streak since Jan. 15 to Feb. 17, 2007.

“It’s just everyone being committed to the same thing,” Moulson said about the resurgence. “We weren’t happy with how we started. It’s a real testament to the guys in here and the coaching staff putting the onus on everyone individually, competing and making sure we’re competing for each other every shift. When you have a whole team going, you can get wins.”

The Sabres will likely have to keep up their recent pace to sniff the postseason.

“It’s tough, because you had a bad start and you’re still behind,” said Foligno, who created Flynn’s tying goal. “But at the same time, we worked ourselves to get up here, and there’s no reason why to turn back.

“We’re all excited. We want to get that eighth spot, for sure, and keep going higher. It’s something that we all see it. It’s still early, and we’re in a good position, where last year we were out early. This is something that is exciting, after Christmas you’re close to a playoff spot, you’re right there.”

Nolan added: “When you’re developing a young team, you’re going to go through those spurts, and we’re not through the woods yet. We still got a lot of growing to do.”

Monday’s game was moved from Feb. 15 to create a date for last month’s snow postponement against the New York Rangers. Fans could cash in their tickets, hence the low attendance.

The Sabres departed Buffalo quickly for the 1,000-mile trip to Winnipeg.

“That’s going to be quite a trip,” Nolan said about the quick turnaround.