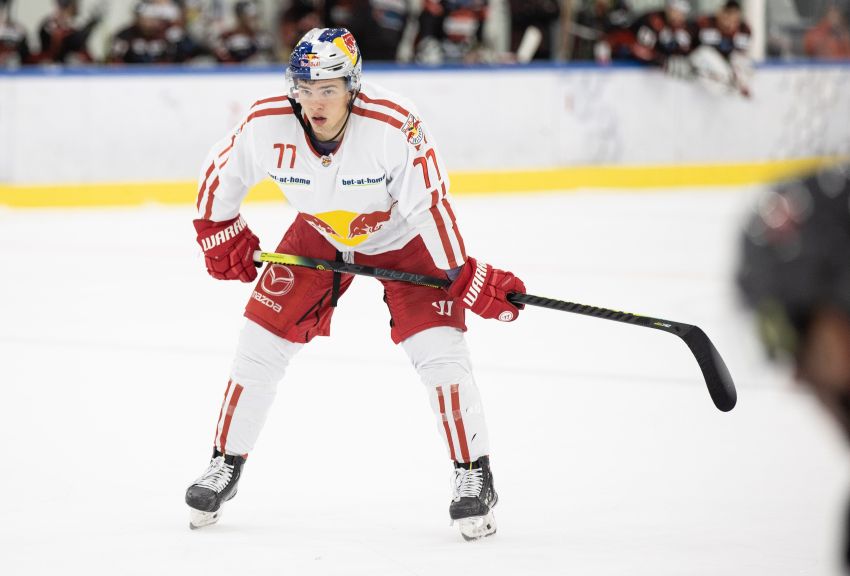 Sometimes Don Jackson’s excitement got the best of him and he became too focused on helping Buffalo Sabres forward prospect J-J Peterka develop for the NHL.

“It seems like I was thinking about him more as a Buffalo Sabre more than I was him winning a championship in Munich,” said Jackson, Peterka’s coach with Red Bull Munich the past two seasons.

Jackson’s words, of course, were a bit tongue-in-cheek. It’s just that prospects of Peterka’s caliber don’t come along often in the Deutsche Eishockey Liga, one of Europe’s top pro circuits.

The Sabres think so highly of Peterka, 19, they traded two picks Oct. 7 to move up four spots and draft him in the second round, 34th overall. At that time, he was beginning his whirlwind season with EC Red Bull Salzburg, an Austrian League team.

Peterka also represented Team Germany at the World Junior Championship and later at the World Championship. In between his German gigs, he returned to Munich after the DEL season started late.

The 5-foot-11, 192-pound Peterka, who usually plays right wing, stood out at each stop, showcasing growth and maturity.

In Salzburg, Peterka, a terrific puck-handler who possesses a lethal shot, scored seven goals and 16 points in 12 games. He looked dynamic for a depleted German squad at the World Juniors, registering four goals and 10 points in five outings.

In Munich, Peterka scored nine goals and 20 points in 30 contests, recording two more goals and nine more points in 12 fewer appearances than 2019-20. He also started killing penalties for Jackson late in the year.

Peterka closed his marathon season early this month, scoring one goal in six appearances before Germany lost the bronze medal game at the World Championship.

The Sabres will likely have high expectations for Peterka, who signed a three-year, entry-level contract June 11, during his first NHL training camp in September. Following camp, the team wants to find the best spot for his development, so it’s unclear where he could land next season.

“The learning part and experience part, obviously he’s got to answer a lot of questions for himself, as far as what he thinks he’s got to do to make it,” Jackson said. “That’s where we obviously spend a lot of time with him. I catch myself going over, above and beyond what our goals as a team were.”

Then Jackson, who has won eight DEL championships, laughed.

“I’m more concerned about him making that next step,” he joked.

Peterka’s brief stint in Austria contributed heavily to his development. In a lower league with a different pace, he played a bigger offensive role.

“Going to Salzburg gave him the opportunity with the pace just a shade slower and the style a shade different, to have the puck, to have it a lot, play in crucial situations, and … start to layer and define some of the offensive capabilities that he has,” Ellis said. “And we feel that was a really good place for him to hone his craft and start to build layers to offensive game, which looking at it and watching it and dissecting it was able to translate through after that start that he had there.”

While Munich had more depth than Salzburg, Ellis said Peterka “was a go-to guy in a lot of crucial situations.”

“And we’ve seen his defensive awareness really start to build as well as he was becoming a 200-foot player,” he said.

That growth contributed to Peterka earning some penalty-killing duty.

“He didn’t kill much, but at the end, I could tell he was watching and paying attention,” Jackson said. “He went about it the right way. I like young players to get that element in their game, because it’s going to pay off for them in the long run, no matter how skilled they are, because the skill will always be there.”