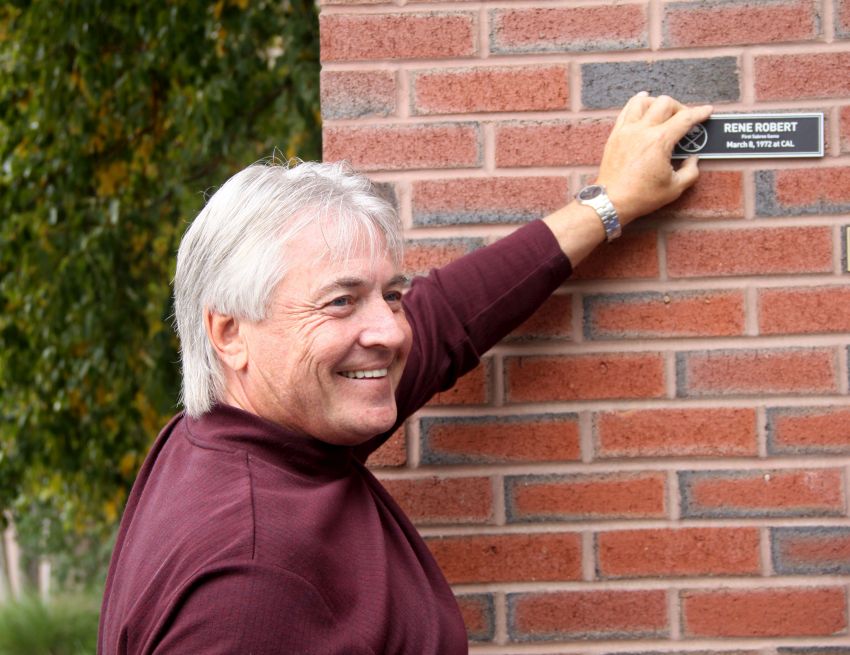 Rene Robert holds his plaque at the Sabres’ Alumni Plaza outside KeyBank Center.

Rene Robert, a member of the Buffalo Sabres’ legendary “French Connection” line and one of the most popular players in franchise history, passed away Tuesday, the team announced. He was 72.

Robert had been hospitalized in Florida since suffering a heart attack last week.

Throughout much of the 1970s, Robert, center Gilbert Perreault and left wing Rick Martin formed hockey’s most dynamic trio.

In 2012, the Sabres immortalized the line by erecting a statue of the three players outside KeyBank Center. In 1995, the team retired Robert’s No. 14 and Martin’s No. 7 beside Perreault’s No. 11 in the Memorial Auditorium rafters.

“If you’re talking about ability to keep people on the edge of their seats, I don’t think there was ever a line put together as good,” Robert said in the book “Celebrate The Tradition,” which was published to mark the Sabres’ 20th anniversary season in 1989-90. “We complemented each other so well on the ice that everything we did was natural. It was an exciting line.”

Perreault, 70, is the only living member of the Connection. Martin passed away March 13, 2011 after suffering a heart attack while driving in Clarence.

While Perreault and Martin were high draft picks who enjoyed instant NHL success, Robert bounced around early in his career, spending three seasons in the minors. He cracked the big leagues in 1970-71, playing five games for the Toronto Maple Leafs.

The Sabres claimed Robert in the intra-league draft following that season but quickly lost him in a later round to the Pittsburgh Penguins. They finally landed Robert on March 5, 1972, sending Eddie Shack to Pittsburgh.

The trade, arguably the greatest in franchise history, ignited Robert’s career and helped the Sabres morph into an NHL heavyweight.

“We had two offensive players in Martin and Perreault so we needed a defensive-type guy to stay high,” Sabres coach Joe Crozier said in “Celebrate The Tradition.”

So Crozier put Robert at right wing beside Perreault and Martin, a spot he would remain for seven years.

“The chemistry among us was absolutely incredible,” Robert said in “Celebrate The Tradition.”

Robert hit the 40-goal mark again in 1974-75 and also recorded the team’s first 100-point season as the powerhouse Sabres roared to their first Stanley Cup final.

His overtime winner in Game 3 of the 1975 Cup final inside the humid Aud, a 5-4 triumph against the Philadelphia Flyers known as “The Fog Game,” remains perhaps the most iconic goal in franchise history.

Robert utilized what he called “a perfect shot” through the fog to beat Flyers goalie Bernie Parent after Perreault shot the puck into the right corner.

Overall, Robert registered 222 goals and 552 points in 524 games with the Sabres.

Scotty Bowman, who was hired at the Sabres’ coach and general manager in 1979, traded Robert to the Colorado Rockies in exchange for defenseman John Van Boxmeer on Oct. 5, 1979.

Even on a hapless team without his electric linemates, Robert scored 28 goals and 63 points in 69 contests for the 19-win Rockies.

Rene Paul Robert was born Dec. 31, 1948 in Trois-Rivieres, Quebec. He is survived by his two children.

“Rene was a tremendous player, teammate and person and truly loved this organization,” the Sabres said in a statement. “His accomplishments on the ice as a member of the French Connection speak for themselves, but his impact in the community continued long past his playing career. Our thoughts are with Rene’s family and friends during this difficult time.”

While Robert spent much of the year in Punta Gorda, Fla., he kept a home in Williamsville and returned in the summer. Buffalo and the Sabres remained close to his heart, and he was a fixture at alumni events.

After Terry Pegula purchased the Sabres, Robert, Perreault and Martin skated on the ice and surprised the new owner during a pregame ceremony Feb. 23, 2011.

“Kim and I were saddened to hear the devastating news of Rene Robert’s passing,” Pegula said of he and his wife, the team’s president. “When we first took over as owners, the members of The French Connection were three of the first people to welcome us to the organization. During our time with the team, Rene has been one of the most active alumni and we’ve grown to know him well over the past 10 years. He was a friend to us and to the entire organization and will be missed dearly. Our thoughts and prayers are with Rene’s family during this difficult time.”

Several years ago, Robert told Pegula he wanted to live long enough to see the Sabres win their first championship.

“I want to be here,” Robert told the Times Herald, “when they raise the Cup.”