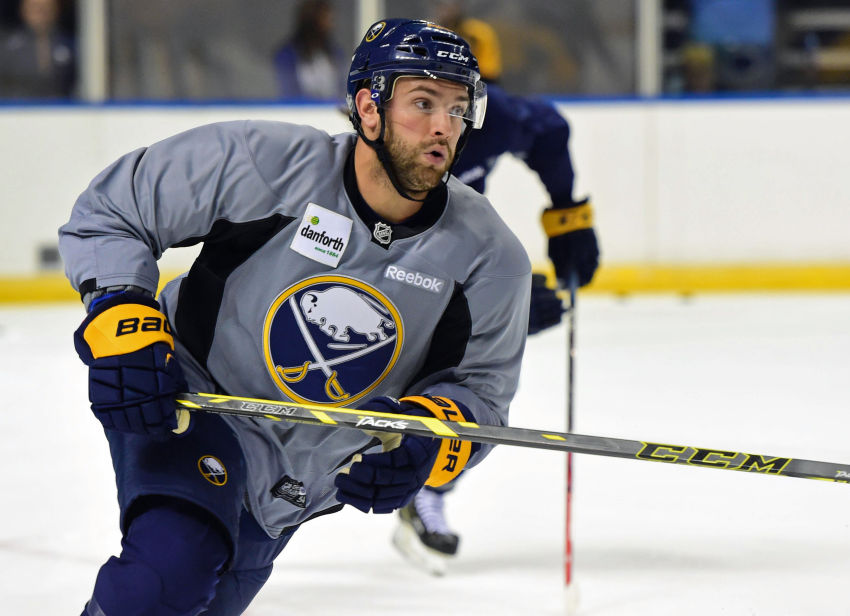 BUFFALO – As last year dragged on and the losses and recalls piled up, at least one bright spot emerged for the depleted Rochester Americans, forward Dan Catenacci, an often overlooked Sabres prospect.

In his second professional season, Catenacci, 22, developed into one of the AHL club’s lone offensive threats, scoring 12 of his 15 goals in his final 38 games.

Jack Eichel’s just beginning what should be a memorable rookie season. Sam Reinhart’s starting his second year. Justin Bailey and Nick Baptiste will likely be in Rochester after finishing their standout junior careers.

“What I saw in his game last year was about the best he had been to that point,” said Amerks coach Randy Cunneyworth, who watched Catenacci last season as a player development coach. “He’s one of the quickest guys on the team, if not the quickest. On the forecheck, there’s not many that can do it better than him.”

The 5-foot-9, 191-pound Catenacci, who can play center or wing, believes he’s “an all-around forward.”

“Last year, the second half … I think that was when I played my best hockey,” he said Saturday. “I think I was just aggressive, fast, making plays, shooting the puck and playing physical. I think playing physical is a big part of my game as well.”

Catenacci, having started in 2011, is the graybeard among the youngsters in rookie camp. He has already played 146 pro games, the most of anyone in attendance.

“I think it’s just a great opportunity to get an early jump on guys and show what you have right off the bat,” Catenacci said about rookie camp.

In Saturday’s 6-2 “Prospects Challenge” exhibition win against the New Jersey Devils, Cunneyworth rewarded Catenacci, playing him up front on the power play beside Eichel and Baptiste. He recorded an assist on Evan Rodrigues’ goal.

Catenacci could play again tonight when the Sabres host the Boston Bruins inside the First Niagara Center. When the main training camp starts later this week, he has a modest but significant goal.

Catenacci showcased his talents throughout a terrific junior career, averaging 32 goals and 74 points in his final three Ontario Hockey League seasons. He had 10 goals and 20 points in 76 contests as an AHL rookie in 2013-14. He jumped up to 29 points in 68 games last season.

“Just getting the opportunity to play more” buoyed Catenacci’s confidence in 2014-15, he said.

“My first year was kind of up and down and last year started off a little slow,” he said. “I think I definitely got a grasp of things and feel like I was getting better every day in the second half. … Chris Taylor (Amerks assistant coach) and Randy Cunneyworth, I think they know what I can bring to the table. They know the type of player I am.”

If Catenacci makes it someday, the Sabres’ 2011 draft might look a little better. So far, only two players – Joel Armia and Nathan Lieuwen – have combined for eight NHL games.