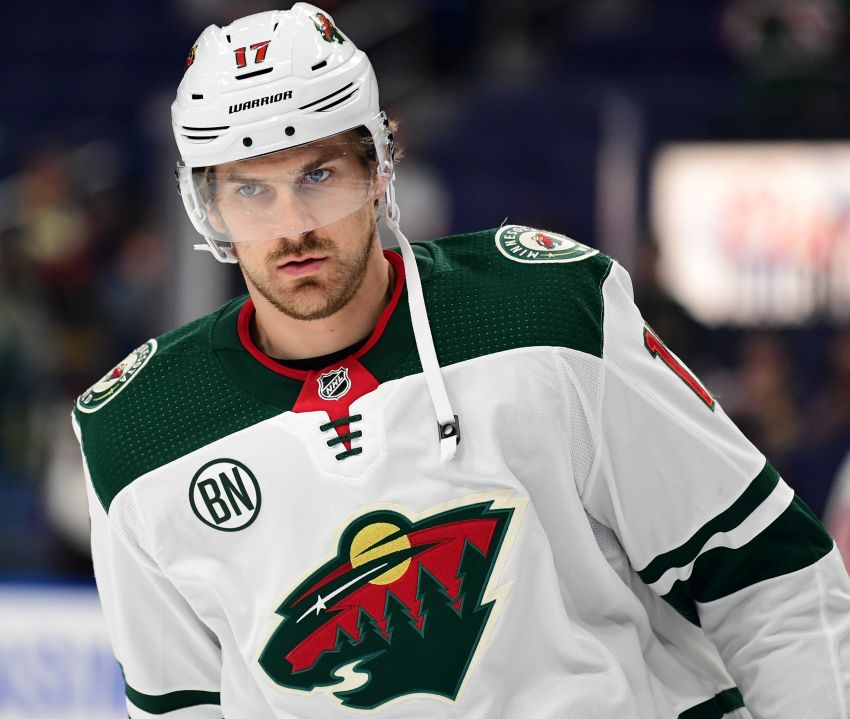 Marcus Foligno is in his second season with the Wild. ©2019, Hickling Images

BUFFALO – This trip was more relaxing. A year ago, Marcus Foligno said he experienced “a lot of nerves” visiting here as an opponent.

“Now it’s just another road game,” said the Buffalo-born Foligno, who’s in his second season with the Minnesota Wild after spending six years with the Sabres.

He added: “It’s always special to come back to Buffalo. You get a little bit excited.”

Foligno, 27, has settled in nicely with the Wild, carving out a regular role as a third- or fourth-line winger.

Six or seven years ago, the affable Foligno, whose teammates affectionately call him “Moose,” was expected to morph into a scorer. Following a standout junior career, he roared into the NHL, compiling six goals and 10 points in his first nine games.

But that’s still the most productive stretch of his career.

After 477 NHL appearances, the 6-foot-3, 228-pound Foligno has become what he called “a physical presence every night.”

“That’s something I take pride in is to be physical,” Foligno said prior to Tuesday’s 5-4 shootout loss to the Sabres inside KeyBank Center. “I think winning battles and things like that. Kind of just now, when you get a little bit older, become a little bit of a leader in a sense of how you have to play and perform every night for guys that follow (me). …

“My role now is someone who’s just steady that’s always going to show up and work hard. This is a different team than Buffalo was in the beginning years I started playing. We got a lot of depth and experience on this team. It shows. Being on the third or fourth line, it’s a good spot to be on, especially on a team like this.”

The Wild, despite earning more than 100 points in each of the last two seasons, have consistently failed in the playoffs, getting eliminated in the first round three straight years.

“The hump is the first round of the playoffs for this team,” said Foligno, who has scored four goals and 12 points in 53 games this season.

Foligno believes this Wild squad, which has started 26-22-4, possesses more depth and balance on defense.

The current edition of the Sabres impresses Foligno, who spent most of his tenure here playing on rebuilding teams. The Sabres began Tuesday with as many points, 56, as the Wild.

“They’re a really good skill team this year,” Foligno said. “That’s the biggest thing. They got a lot of guys that can fly, that can handle the puck.”

He added: “Buffalo fans deserve playoffs and I think they’ll be getting it pretty soon.”

The Sabres, of course, have undergone major changes since trading Foligno to the Wild with winger Tyler Ennis for winger Jason Pominville and defenseman Marco Scandella on June 30, 2017. Foligno only played with 11 Sabres in Tuesday’s lineup.

While he loves Buffalo, he said moving on might’ve been for the best.

“Change is good sometimes,” Foligno said. “It’s a fresh start for everyone.”

Captain Jack Eichel on the Sabres’ new lines and being broken up with Jeff Skinner, the 31-goal winger: “We’ve played together for a few months now and I think anytime during the season you have to be ready to take anything on. Obviously, our team hasn’t been going the way we want right now. I don’t know if a change was needed or whatever but whenever things aren’t going well you look for changes to spark the group. I think this can be a good thing for us.”

Sabres coach Phil Housley made some changes in the third period. Most notably, he put Eichel and Skinner back together.