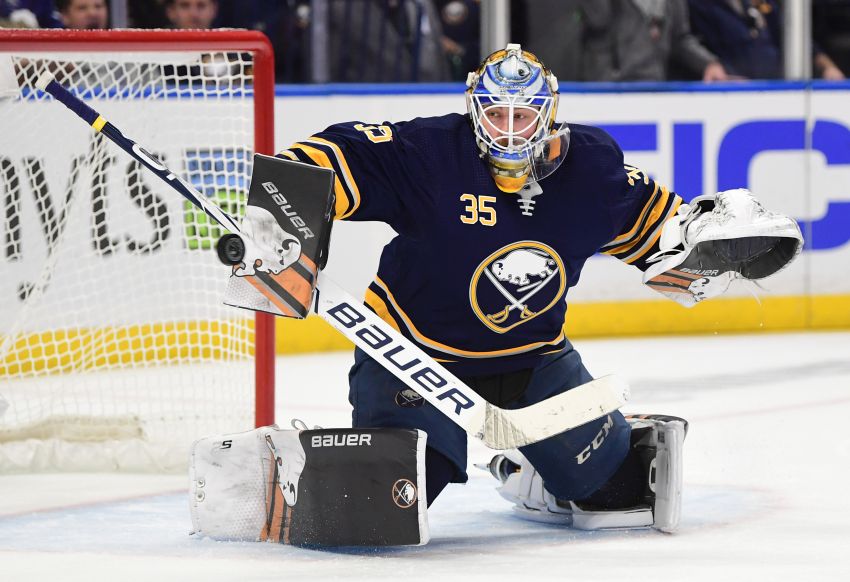 BUFFALO – In the last month or so, Sabres goalie Linus Ullmark has regularly earned starts over Carter Hutton.

Instead of simply playing the second game of a back-to-back set, Sabres coach Phil Housley has utilized Ullmark eight times in the last 11 contests.

Two of those appearances, including the final 20 minutes of Friday’s ugly 7-3 loss to the Chicago Blackhawks, came in relief of the struggling Hutton.

Ullmark, 25, will start again tonight against the Minnesota Wild, his fourth nod in the last six contests.

If the Swede keeps performing well, he could become the Sabres No. 1 goalie, a job many believed he would ascend to someday.

“There’s no question in my mind Linus has played solid for us,” Housley said this morning inside KeyBank Center. “He’s given us an opportunity to win. You look at the game against Calgary (Jan. 16) with the saves he was making and that’s a great statement to make.

“When you evaluate it on a game-to-game situation, Linus has played some good hockey and hopefully he has a great game tonight and we’ll make that evaluation the next day.”

– The Sabres will showcase the new lines, defense pairs and power play units they debuted Monday.

For the first time in months, captain Jack Eichel will center a line without 31-goal Jeff Skinner.

“We’ve played together for a few months now and I think anytime during the season you have to be ready to take anything on,” Eichel said. “Obviously, our team hasn’t been going the way we want right now. I don’t know if a change was needed or whatever but whenever things aren’t going well you look for changes to spark the group. I think this can be a good thing for us.”

– The Sabres are 2-8-1 lifetime against the Wild at home. Minnesota has five straight games in Buffalo. Conversely, the Sabres are 8-4-0 in Minnesota since the Wild joined the NHL in 2000.