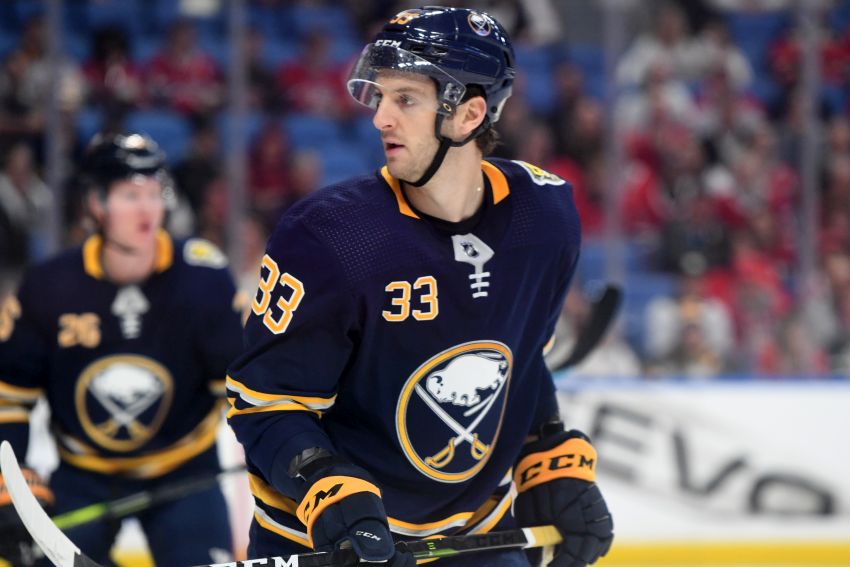 TORONTO – Who expected Buffalo Sabres defenseman Colin Miller would be a healthy scratch once this season, let alone six times before December?

But a crowded blue line – the Sabres have seven healthy defensemen, including five right-handed shots – forced them to bench one in eight recent games.

Miller, 27, was usually the odd man out.

“I’m not getting many bounces lately,” Miller said prior to Saturday’s 2-1 overtime loss to the Maple Leafs inside Scotiabank Arena.

When the Sabres traded two draft picks to the Vegas Golden Knights for Miller on June 28, it seemed like a steal.

Not only had Miller played for the Stanley Cup in 2018, he was a major contributor to the expansion team’s shocking season, scoring 10 goals and 40 points.

Salary cap problems forced Vegas to deal Miller and the four-year, $15.5 million contract he signed in 2018.

As the Sabres roared out of the gate this season, Miller enjoyed regular duty beside Rasmus Dahlin, skating around 19 minutes most nights.

But after the Sabres started struggling and Zach Bogosian and Brandon Montour returned from their injuries, coach Ralph Krueger began scratching Miller.

“It (stinks),” Miller of sitting out. “Nobody wants to but … you treat it like a pro and you come in and work hard every day, control what you can. That’s what I’ve tried to do.”

Krueger wouldn’t get into specifics why he scratched Miller, who compiled a minus-7 rating in his eight outings before sitting out.

“We have a high competition in the defense right now,” he said. “He just has to continue to work the way he is and he’ll feel more and more comfortable in our system.”

“In the team meetings, you wouldn’t know who the guys are who are in or not as far as the engagement is concerned,” he said.

Miller’s status as the seventh defenseman the last two games forced him to play on the left side – right-handed shots normally stay on that side – with Henri Jokiharju or Rasmus Ristolainen.

Before a few outings this season, Miller said he had only played on the left side once or twice as a pro.

“It’s different and … not a situation you’re normally in,” said Miller, who had registered zero goals and four assists in 20 games this season entering Saturday. “Normally teams have less right-handed defensemen. … It was a little different, but it’s been going OK.”

Krueger said: “We actually like Colin’s game on the left side. We see him as a real option there. It’s, with our sticks at the moment, something we need to know.”

The biggest adjustment to playing on the left side, Miller said, is facing the rush.

“You’re more to guys coming down on (the) right side, whereas the left side you’re not as used to it,” he said.

There are, of course, positives.

“In the offensive zone, you can walk the (blue) line a little bit easier, you get it on your forehand and you’re on your one-timer,” said Miller, who possesses a lethal shot. “So there’s pros and cons.”

The Sabres have dressed seven defensemen and 11 forwards five times in the last seven games.

“I’ve actually always liked it as a coach,” Krueger said of dressing an extra defenseman. “I’ve used it lots of times in the past. It gives you options to really mix different guys into the lineup. You see the top-end guys don’t get extra ice time out of it. It’s more of a sharing of guys that sometimes don’t get the minutes, and I think they’re more into the game when they do that.”

Sabres rookie center Rasmus Asplund on the penalty shot he received with 0.9 seconds left in Friday’s game: “If it’s 0.9 seconds left or it’s the first shift in first, I think he made the right call.”

Leafs goalie Michael Hutchinson stymied Asplund’s backhand attempt. As Asplund zoomed in on goal, it looked like he was trying to shoot the puck between his own legs.

“I just thought that was a time and place to try something cool,” the Swede said.