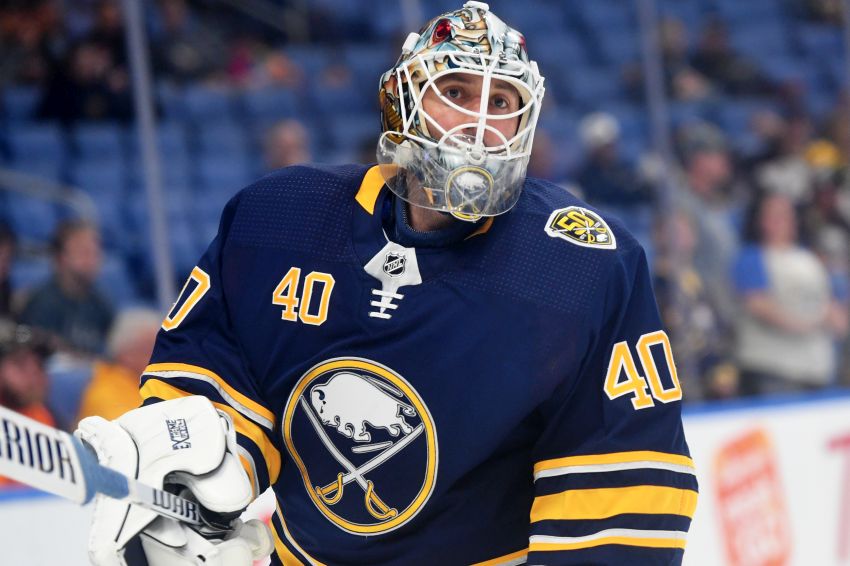 TORONTO – Following a few dismal weeks, the Buffalo Sabres have quietly started showing signs of snapping out of their long funk.

Sure, Saturday’s 2-1 overtime loss to the Maple Leafs closed a disappointing November in which they went 3-8-2, losing 10 out of 13 games.

But the Sabres finished the month strongly, going 2-1-2. Earning points in four out of five contests during a busy seven-day stretch illustrates progress.

They’ll begin December in fourth place in the Atlantic Division, just one point behind the Leafs. In the beginning the season, being so close to playoff spot after 27 games would’ve been regarded as progress.

Of course, that was before the Sabres started the campaign 9-2-1.

Banking those early points sure has helped them.

“I feel like we’re on the right track here,” Sabres center Marcus Johansson said after Leafs captain John Tavares scored 1:45 into overtime. “That’s more like the way we want to play.”

Sabres defenseman Rasmus Ristolainen said: “We’re getting our game back.”

A day after beating the Leafs 6-4 in Buffalo, the Sabres couldn’t finish a slew of prime scoring chances early against goalie Frederik Andersen.

But Hutton likely wants Tavares’ goal, a floater from inside the blue line, back. The Sabres did not make him available to the media following the game.

Hutton, who hasn’t won a game since Oct. 22, struggled for more than a month and lost playing time to Linus Ullmark. Saturday’s effort likely earned the veteran another start soon.

The Sabres haven’t exactly helped Hutton much recently. On Saturday, they locked down, preventing the Leafs from generating strong opportunities around him.

“It was really strong,” coach Ralph Krueger said of the Sabres’ even-strength defending. “The puck pressure was amazing from everybody. We were strongly connected from the forecheck all the way back. We felt Toronto didn’t get a lot of second opportunities, Carter took care of the first ones.

“But we were really eliminating the second shots and second chances and created a lot of defensive pressure, which gave us some of the offensive momentum that you saw developing during the game.”

Sabres defenseman Marco Scandella said of Hutton: “We should’ve rewarded him with a win.”

Leafs winger William Nylander’s power-play goal opened the scoring 5:30 into the second period. The Sabres thought they tied it at 10:50, as replays appeared to show Andersen gloved winger Conor Sheary’s point-blank shot behind the goal line.

But there wasn’t conclusive evidence to overturn the no-goal call on the ice.

“I thought we scored one in the second,” Krueger said. “It wasn’t counted, but we buried it in our minds and continued to work.”

Ristolainen tied it 6:58 into the third period, pinching in and backhanding a shot past Andersen, who improved to 11-3-0 in his career against the Sabres.

The Leafs nearly won it in the waning seconds of regulation, but Scandella swept the puck away after center Auston Matthews’ shot beat Hutton.

“(We) really deserved more than a point here when I look at the third period, so (I’m) really proud of the effort of the guys just digging it really deep,” Krueger said.

While the Sabres have settled down and improved during the last week, their power play is still downright awful. After going zero of two Saturday, they’ve scored just once in their last 37 tries over 14 games.

Remember, the Sabres’ power play ranked first early in the season and was perhaps their best asset.

“The power play is just not functioning at the moment,” Krueger said. “We have to stick with it. … That is truly one of the sore spots that we have after a game like this.”

Johansson said: “It definitely gets in your head a little bit.”

One thought on “Sabres showing signs of progress, close month one point out of playoff spot”