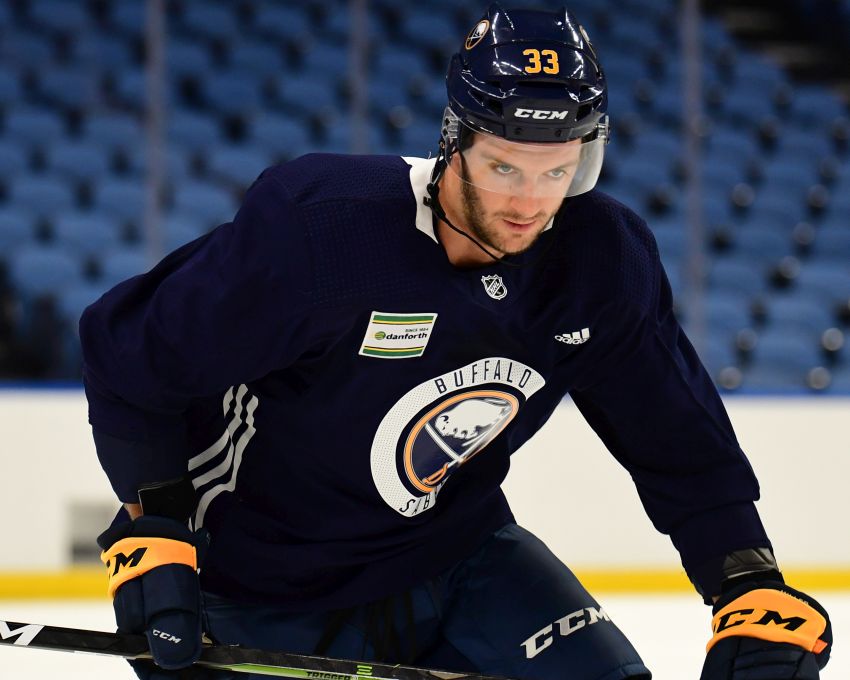 Within a matter of weeks, a group that had little or no expectations began one of the greatest and most unique seasons in NHL history.

Players who had never spent any time together quickly meshed. The Golden Knights morphed into a powerhouse and would become the unlikeliest Stanley Cup finalist ever.

A common bond united them.

“We kind of all had a chip on our shoulder,” Miller said Tuesday inside KeyBank Center. “We were all frustrated from … being let go by our former teams.”

In Miller’s case, after compiling six goals and 13 points in 61 games in 2016-17, the Boston Bruins left him unprotected for the expansion draft.

The former fifth-round pick seized his opportunity with Vegas, scoring 10 goals and 41 points in 82 outings in 2017-18.

Miller, 26, knows frustration can be a powerful tool if it’s utilized properly. For the Golden Knights, it helped buoy them to within two wins of a championship.

These days, Miller, who was acquired for two draft picks on June 28, sees some Sabres irked by all the losing they’ve endured.

“In a sense here, there’s some frustration around this locker room,” Miller said after the Sabres prepared for tonight’s preseason game against the Columbus Blue Jackets. “This team hasn’t done what they wanted to do the last couple years, and we should go into this season with that kind of feeling in our stomach.”

He added: “I can bring some of that experience over from Vegas that we had the last couple years and try to help this team move forward.”

Shortly after the trade, Miller acknowledged he felt “mixed emotions” leaving Vegas. But on Tuesday, he said he “moved forward pretty quickly.”

“I was excited once I got here and came down here in late July and kind of met the faces,” he said. “Ever since then it’s been pretty great.”

Miller’s new opportunity excites him. While he made significant contributions to the Golden Knights, he wasn’t one of their top defensemen.

The Sabres plan to lean on Miller heavily. In Saturday’s 5-3 win over the Toronto Maple Leafs, he skated in every situation, playing 22 minutes, seven seconds.

“I’m going to hopefully get some opportunity here, be able to compete against some top or higher lines, which I didn’t really get that opportunity in Vegas,” Miller said.

“He has picked up and embraces what we are doing here,” Krueger said.

There’s a good reason for that. The Sabres, Krueger said, are implementing many of Vegas’ “principles or concepts.”

“We just have our own package of how we’re going to do it,” he said. “So for him, I feel that he’s comfortable in the way we want to play.”

Krueger has watched Miller aggressively pressure the puck all over the ice.

“His ability to read that is very high,” he said.

So is Miller’s ability to shoot the puck. He unleashed some lethal one-timers from the point Saturday.

“We saw the weapon that he is the other night,” Krueger said. “Those are four or five of the better shots I’ve seen in a lot time. Every one’s a threat, every one is dangerous and the forwards will be excited to be around the net when he’s shooting.”

McCabe said: “I kill penalties, so I’ve seen it plenty of times whizzing by me.”

Miller’s heavy shot probably ranks among the NHL’s most underrated.