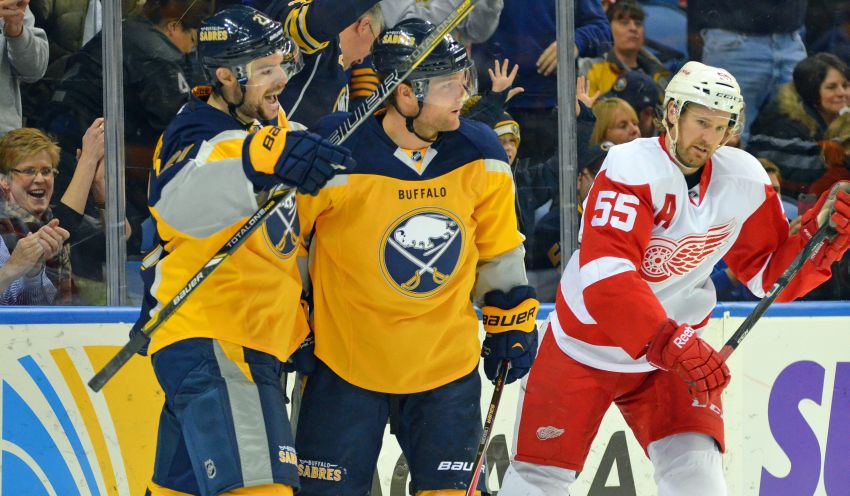 BUFFALO – Just under eight minutes into the Sabres’ 3-1 loss Sunday, winger Drew Stafford created one of the struggling team’s few highlight-reel goals this season by stealing the puck from Detroit’s Darren Helm above the left circle and dishing to an open Cody Hodgson in the slot.

The center then waited for Jonas Gustavsson to go down before tucking the puck past the outstretched goalie.

The Sabres would score 134 goals over 82 games at their anemic pace, 17 fewer than the worst offense in NHL history, the 1997-98 Tampa Bay Lightning.

“It’s definitely disappointing because we have a lot of skill in here, a lot of guys that are capable of scoring goals,” Stafford said Tuesday after the Sabres prepared for tonight’s tilt against the Montreal Canadiens inside the First Niagara Center. “It just hasn’t happened yet.”

Stafford comprises one-third of perhaps the league’s worst No. 1 line.

– Stafford has two goals this season and one in his last 19 games. He has a 3.1 shooting percentage (65 shots).

Still, Nolan has kept the trio intact, only breaking it up for Thursday’s 4-1 loss in Philadelphia.

In the recent past, if the Sabres’ top scoring combination was struggling, players would’ve been dispersed.

But Nolan wants to be “consistent with our message and our delivery.”

“In the past where if the line doesn’t score in a game, everything’s blown up,” Stafford said. “To have a little bit of continuity and consistency, continuing to let us practice together and try to develop some chemistry. It’s great. I really appreciate that.”

Hodgson likes building “some stability within the team.”

“Playing with guys consistently just builds the same kind of trust in your teammates,” he said. “You know what they’re going to do. They’re going to read off that so you don’t have to read and react. You can just know what our team’s going to do and go from there.”

Moulson said Nolan’s “showing a lot of faith in us.”

“We better prove him right,” he said. “Nothing comes easy in the NHL. You got to continue to work for what you have. Obviously, we have to do more.”

It appeared Moulson would do much more following his arrival from the New York Islanders in the Thomas Vanek trade.

But the 30-year-old, one of the NHL’s best net-front presences, is mired in the second-longest goal drought of his career. He went 13 games without scoring last season, although he finished with 15 in 47 games. He had six goals in 11 contests before the deal.

“I got to figure some things out with my game and make sure … I’m getting those dirty goals in front,” Moulson said. “I think you just have to find a way when you’re in a slump or something I’ve been in. I’ve been in lots of slumps in my career. You continue to work. It seems like you get a dirty goal off your leg or something, all of a sudden, boom, it sparks something.”

Stafford believes the line could spark something if it starts playing better defensively.

“It starts in our own end,” he said. “If we’re spending 30, 40 seconds in our own end, you’re out of gas by the time you can get any offense going. We’re trying to start there, be more solid there and that can lead to more zone time in the other team’s end.”

“My simple philosophy in life is if it ain’t working, you ain’t working hard enough,” Nolan said after reuniting the line Saturday. “You just got to … do things maybe you don’t want to do sometimes, and that’s go up the wall, dump it and go get it. Sometimes we want to carry it in and make a nice play.”