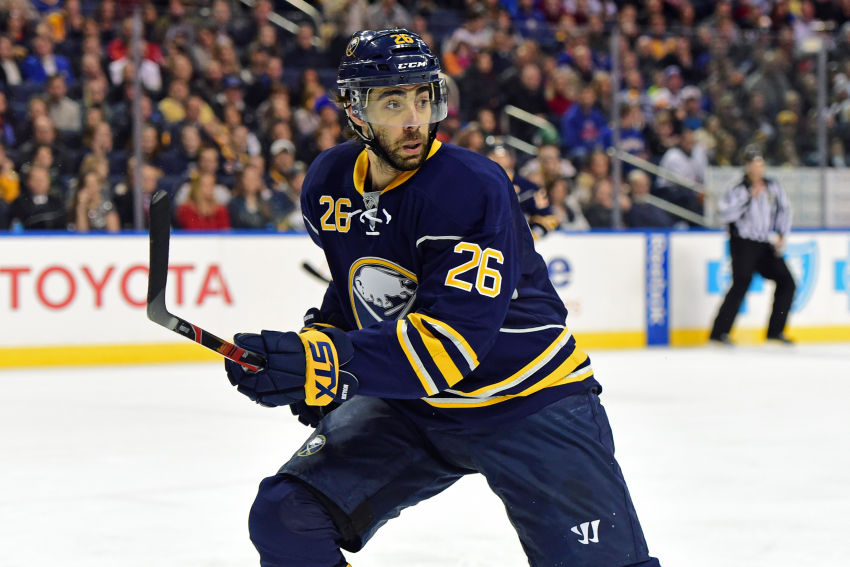 BUFFALO – Struggling Sabres winger Matt Moulson understands that after going 24 games without scoring a goal – a career-long stretch that dates back to Nov. 1 – sitting out as a healthy scratch Wednesday was probably a good thing.

“I think … maybe (it) was a good time to just get my mind right and make sure I’m playing the way I’m capable of to help this team,” Moulson said Thursday inside the First Niagara Center.

Moulson, 32, returned Thursday against the New York Islanders, the last team he scored against. The veteran watched a 5-2 road loss in Washington a night earlier, something he believes helped him.

Update: Moulson skated 12 minutes, one second in the Sabres’ 2-1 loss and had zero of their 43 shots.

Moulson, who scored 30 or more goals three straight seasons with the Isles from 2009-12, has been the Sabres’ biggest disappointment in 2015-16, the second season of a five-year, $25 million contract. He began Thursday with only four goals and 12 points in 36 games, a stunning nine-goal, 27-point pace.

He knows getting wrapped up in his statistics will “twist your mind up pretty good.”

Is Moulson, who’s at his best around the net, simply pressing too much?

“At times, maybe, but I think there’s a lot more to it than that,” Moulson said.

Sabres coach Dan Bylsma clearly didn’t want to bench Moulson. He demoted Moulson to the fourth line for three games and played him less than 12 minutes before finally sitting him.

“It wasn’t something I take a lot of pride in, but I think it was necessary for Matt to get back to where he needs to be to be effective for our team,” Bylsma said.

Moulson’s obviously a bigger threat on a scoring line, so Bylsma put him beside center Johan Larsson and Evander Kane on Thursday.

“He can get in there and contribute and bring what he brings to our team, and that’s what he has to do,” Bylsma said. “He hasn’t been in that situation, hasn’t done that for us in the last while. That’s a disappointing thing for Matt.”

Moulson added: “I love playing in Buffalo and want to win with this team and this organization. I know what I have to do. I’m ready to get back to that.”

Bylsma had no update on Ennis, who’s enduring a miserable season. He recently missed 12 games with an upper-body injury.

“I got that feeling of shaking my head at the possibility of him being injured again,” Bylsma said.

Ennis has only three goals, 11 points and a team-worst minus-9 rating in 23 appearances. The Sabres’ leading scorer last season hasn’t scored a goal since Oct. 27, a 14-game stretch.

Ennis turned into Ovechkin’s hit, which Bylsma said was clean.

“He’s just tries to get away from it, and in doing so he gets hit back, kind of gets whiplashed on the ice,” Bylsma said.

After sitting out five games with an elbow cut and as a healthy scratch, Sabres winger Marcus Foligno returned Wednesday, impressing Bylsma while skating 10 minutes, 11 seconds.

“I think Marcus has the ability to be a big, power, tough guy to play against driving,” he said. “I think that’s what he got an opportunity (Wednesday) to do that a few times, and I thought he was that. (He was) big in the corners, hard to deal with.”

Foligno, who had only two goals and 20 shots entering Thursday, hit the crossbar Wednesday.

“Kind of the story of his year a little bit,” Bylsma said.