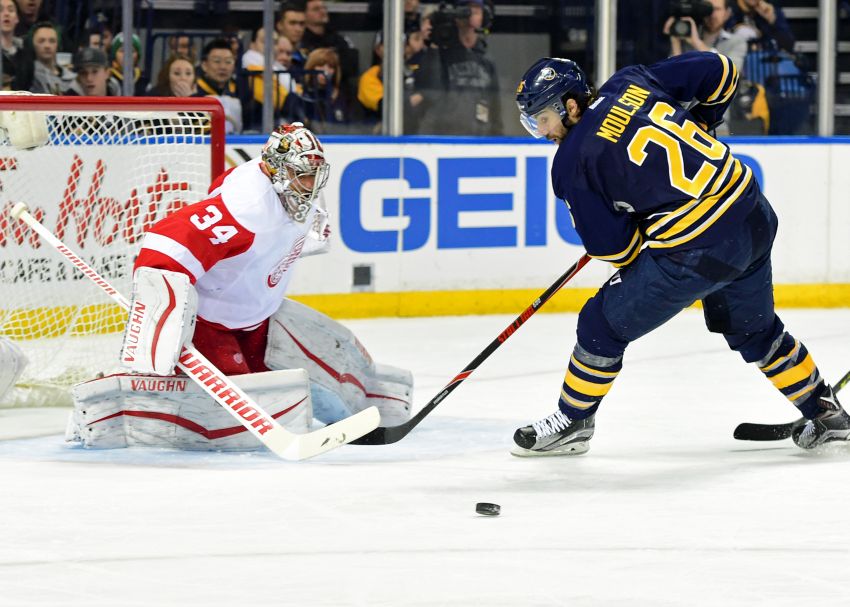 BUFFALO – At this point, five goals and 64 games into Sabres winger Matt Moulson’s miserable season, all the work he’s putting in and the revamped training regimen he has been following is about seeing results next season.

Yes, according to general manager Tim Murray, who ripped Moulson on the radio Thursday, and coach Dan Bylsma, the three-time 30-goal scorer is still in the Sabres’ plans. They talk about the veteran, 32, returning for the third season of his five-year, $25 million contract.

“A guy you look to to bring some offense and bring some offensive zone into this team,” Bylsma said this afternoon inside the First Niagara Center. “Yes, I look for and expect it to be there come next season.”

Speaking on WGR, Murray said Moulson “has neglected some things in the last couple years as far as how workouts are changing, how we as an organization are changing with our young players and even our players on the team.”

The team has challenged Moulson.

When asked about Murray’s comments, Moulson said his season has not gone the “I wanted it to go.” He has one goal in his last 52 games since Nov. 1.

“I think I’ve just been putting in a lot of work on and off the ice and get myself to where I want to be,” Moulson said.

Moulson said he’s “trying to build confidence” through his workouts. His regimen, he said, doesn’t “change very much.”

“I train extremely hard in the summers,” he said.

“The long-term goal is to have him better and able to produce starting next September in training camp, but it has started now,” Murray said. “The extra work has started now. We know it won’t pay off, like I say, tomorrow, but I fully expect he’ll come back better next year. This is almost like coming off an injury where we’ve changed his daily routine, his workouts, his pregame, postgame, day off.

Bylsma said Moulson has been “diligent about that work.”

“He’s been extremely hard off the ice mostly,” he said. “We don’t get the big opportunity to do it on the ice all the time. He’s been doing that off the ice, and that’s a process that’s going to take longer than sooner but one I know he’s committed to doing.”

Bylsma, who has been under the weather, stayed off the ice today. Meanwhile, assistant coach Dave Barr recently hurt himself jogging and won’t be on the bench for a bit after undergoing surgery, Bylsma said. Assistant coach Dan Lambert moved down from the press box Thursday to replace him.