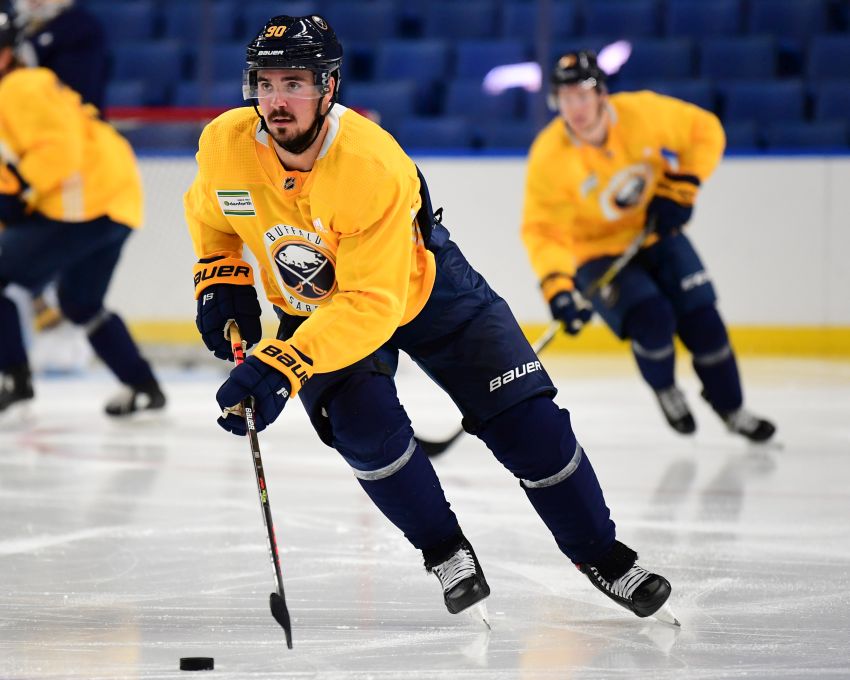 BUFFALO – Counting 22 postseason appearances, forward Marcus Johansson played 32 games with the Bruins. The Swede arrived in Boston on Feb. 25 and was gone by July 6, when he signed a two-year, $9 million contract with the Sabres.

But Johansson’s short run with one of the NHL’s model franchises recharged his career.

After battling injuries, including two concussions, with the New Jersey Devils over a season and a half, Johansson played regularly throughout the Bruins’ run to Game 7 of the Stanley Cup final.

“Kind of made me feel like myself again,” said Johansson, who made his preseason debut in Saturday’s 5-3 win over the Toronto Maple Leafs inside KeyBank Center. “Coming off all those injuries it was hard to kind of get into any rhythm of playing.”

Johansson, 28, also learned how the culture stars Patrice Bergeron and Zdeno Chara and others have created has helped buoy the Bruins’ success.

“I especially learned a lot from those guys,” Johansson said. “It’s an unbelievable group of guys, and then the leadership they have in that room … it shows when you have a good group of guys how much it means. …

He added: “That was a really cool experience to see how tight that group was and how they do lead it.”

Johansson had never experienced anything like the Bruins’ charge to the final. Having spent his first seven seasons with the Washington Capitals, he endured year after year of playoff disappointment.

After Washington traded him to New Jersey in 2017, the Capitals won the Cup.

Johansson said coming so close to a championship before losing to the St. Louis Blues is “something that I’m not sure I’ll ever be able to kind of let go.”

“You don’t know what’s going to happen,” he said.

In the Sabres, Johansson found a team that wants him to a play a large role, possibly on the top two lines. On Saturday, the two-time 20-goal scorer centered Rasmus Asplund and Victor Olofsson, a line comprised of Swedes.

Asplund drew a hooking penalty during a terrific shift by the trio in the second period, and Olofsson’s wicked one-timer on the ensuing power play briefly put the Sabres up.

Olofsson scored the game-winning goal 17:24 into the third period on a shift with center Jack Eichel and Sam Reinhart.

But Olofsson mostly played beside Johansson, who has spent most of his nine seasons as a left winger. Still, Johansson began his NHL career playing center and looked comfortable there Saturday.

“It’s a test for us see what level we’ll get out of him,” Sabres coach Ralph Krueger said. “When you think not only his first game, but then in a position he hasn’t played in with players he’s never played in a system he hasn’t played in, I thought he did a really good job.”

Krueger said he will likely utilize Johansson at center again.

Johansson is the latest player the Sabres have added from a winning background.

So far, it hasn’t translated to any success. But the Sabres, who haven’t made the playoffs since 2011, have four players who played in the last four Stanley Cup finals.

A week before the Sabres signed Johansson, they traded for defenseman Colin Miller, a big contributor to the Vegas Golden Knights’ run to the final in 2018. Wingers Conor Sheary and Scott Wilson won Cups with the Pittsburgh Penguins in 2016 and 2017.

Johansson is one of only six Sabres 28 or older. Just two Sabres – wingers Kyle Okposo and Jeff Skinner – have played more NHL games than Johansson’s 588.

The newcomer is the oldest of the seven Swedes the Sabres have on their training camp roster.

Before camp, the Swedes gathered for dinner and spoke their native language.

“It kind of makes it feel a little bit more like home right away,” Johansson said. “When you have other guys from your same country that are in the same position as you are, I think that definitely is a good thing for all of us.”

Notes: The Sabres are expected to assign some players to the Rochester Americans today or Monday. The AHL club opens its training camp Monday. “Tonight’s going to be a big night,” Krueger said of the roster decisions. … Sabres defenseman Rasmus Ristolainen made his preseason debut partnered with Rasmus Dahlin at even strength. Ristolainen said he started camp with a “little injury.” In the third period, the Finn leveled Toronto defenseman Tyson Barrie. “It’s good to have him on board in every single way,” Krueger said. … Former Sabres prospect Nick Baptiste, who played 47 games with Buffalo, dressed for the Leafs. The winger signed an AHL contract with Toronto’s AHL affiliate, the Marlies, during the offseason. … Former Sabres goalie Michal Neuvirth, who’s on a tryout with Toronto, stopped 20 of the 22 shots he faced during the opening 40 minutes. Michael Hutchinson replaced him for the third period. … The Sabres announced a crowd of 17,224.