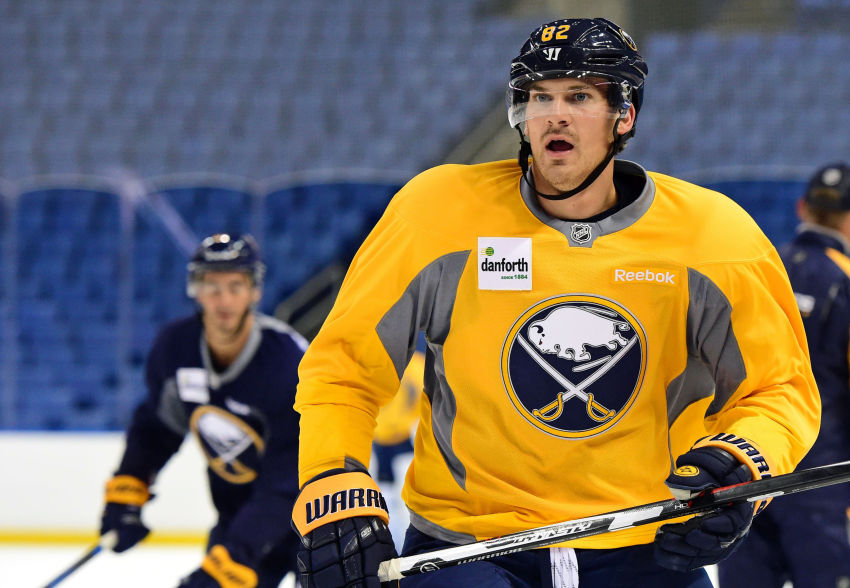 TORONTO – Like the coaches before him, Dan Bylsma catches glimpes of Marcus Foligno’s potential watching the 6-foot-3, 226-pound Buffalo Sabres winger on tape. But, Bylsma noted, “How often do you have to watch him?”

Coaches could examine weeks of video before finding a single Foligno highlight.

“You watch him skate and you see his size and you see what he can do on the ice,” Bylsma said Thursday after the Sabres prepared for tonight’s exhibition game against the Maple Leafs. “(If) he can play big and strong and consistent … then he’s going to be a big player every night, and that’s really his challenge.”

Foligno showcased little consistency in his first four seasons. His best NHL stretch is still his first prolonged stint as a rookie, a six-goal, 13-point run during 13 late-season games in 2011-12 that raised expectations Foligno, 24, could develop into a first-line power forward.

He has only 20 goals and 57 points in 178 games since that rollicking start, including eight goals and 20 points in 57 contests last season, a disappointing campaign in which he broke his hand in the midst of his hottest stretch.

This could be a make-or-break season for the Buffalo-born Foligno, a restricted free agent next summer.

“It’s a big year for me, big year for the team,” Foligno said inside HarborCenter. “I know if there’s team success there’ll be individual success.”

Foligno’s ready to stop talking about his consistency.

“I think consistency’s over with,” he said. “I think there’s no excuse for consistency, you should be ready to play now. I’m old enough, experienced enough I know what I need from myself. It starts with preseason. I feel right now I’m in a good spot.”

After shoulder surgery hampered him last summer, Foligno believes he started training camp in the best shape of his life.

“I think I just leaned out, I got more muscle mass than anything,” he said. “I just feel more into my body, I feel more control.”

Foligno’s performance in Monday’s exhibition opener, a 3-2 win in Minnesota, impressed Bylsma, who thought he “played big and strong and forechecked” beside center Johan Larsson and Nick Deslauriers.

A fight during a test session of the new three-on-three overtime – “That was probably not what the NHL was thinking about three-on-three,” Foligno joked – ended his night.

Foligno feels with Bylsma, his fourth NHL coach, he has a clean slate.

“It’s something (like) when I first came into this team four years ago … so I feel rejuvenated, feel positive and feel like I can get back to where I was,” he said.

“He’s positive, he’s energetic,” he said. “Just one game in Minnesota, behind the bench, his life was there. He’s calling out plays, calling out demands while the game is going on. You know who’s up right away. He’s very detailed.”

Foligno understands development can take years. His brother, Nick, Ottawa’s 2007 first-round pick, had some solid and so-so seasons before a breakout 31-goal, 73-point All-Star campaign with Columbus in 2014-15.

“He’s 27, he had his biggest (year),” Foligno said. “You have to stick with it in this league. There’s a lot of good players that are 28, 29, 30 years old that are really hitting their peak right now. For a guy like me who just turned 24, every day you got to learn and grow. I feel that I can do that. I think having an older brother that’s modeling you, it’s easy to look up to him and learn from his abilities and his work ethic.”

When the brothers, whose father, Mike, captained the Sabres from 1989-90, worked out together during the summer in Sudbury, Ont., Marcus tried to pick Nick’s brain.

“You’re getting advice from an All-Star that’s your brother, it’s pretty significant, whatever he tells you,” he said. “It’s not like he just goes with the flow. He works hard.”