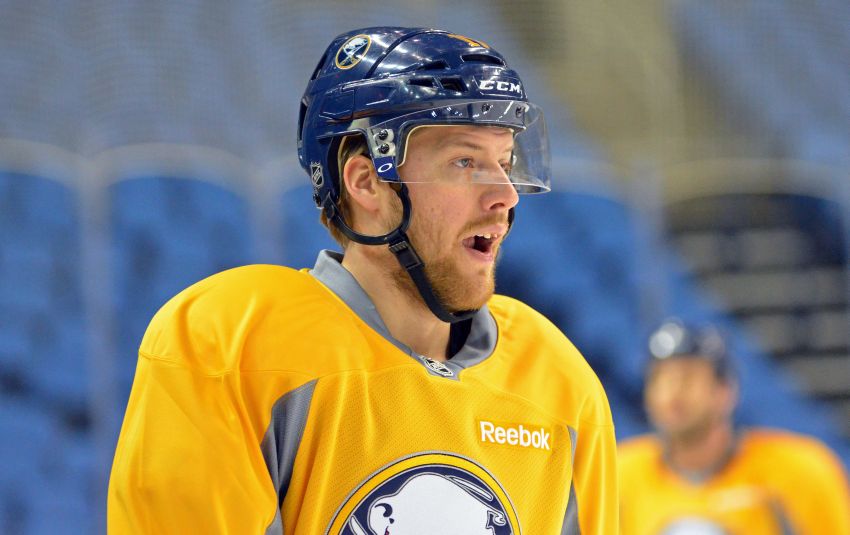 BUFFALO – So far, 11 games into his Sabres career, Linus Omark has been a colossal disappointment, compiling zero goals, two assists and seven healthy scratches for the NHL’s worst team.

But the slick winger will return tonight against the Edmonton Oilers, his old team, after sitting the last three games. The Swede might even skate on the top line.

Omark smiled Sunday when a reporter asked if he was looking forward to facing Edmonton, which dished him for a conditional sixth-round draft pick Dec. 19.

“I would be lying if I said no,” Omark said following practice inside the First Niagara Center. “Of course, it’s going to be a fun game. I know a lot of guys on the team.”

Omark skated beside center Tyler Ennis and Drew Stafford on the left wing Sunday. Nolan, however, wouldn’t say if he’d stay there for tonight’s tilt against the Western Conference’s worst team.

What does Nolan want to see from the flashy Omark, who turns 27 years old Wednesday?

Omark played once with Edmonton in 2013-14. He returned to the organization that drafted him 97th overall in 2007 this season after a year in Switzerland.

“Of course, you want to play,” said Omark, who spent most of this season in the AHL. “But I thought there was a lot of good players (in Edmonton). I understand them. I had a good time.”

The Sabres, losers of eight of the last 10 games, originally had Sunday scheduled as a day off. Of course, Saturday’s 7-1 shellacking from the Avalanche in Denver changed that.

“The one thing I learned a long time ago, you can’t do too much about yesterday, it’s gone,” Nolan said. “But the one thing you can do is learn from it, and today’s a new day. It’s an 82-game schedule. It’s a lot of hockey.

“So you can’t dwell on the losses too much. You take about 10 minutes afterwards and you got to focus on today.”

The Sabres couldn’t build off of Thursday’s 3-2 win in Phoenix.

“The weather got us in really good spirits, and then maybe the snow got us in bad spirits,” Nolan joked. “I don’t know. It wasn’t very good.”

Stafford, out the last four games, will return tonight, he said.

The 28-year-old re-aggravated his upper-body injury Jan. 25 in Columbus. He’s missed eight of the last 13 contests.

“You got to be careful, got to be sure you’re 100 percent ready to go because you don’t want to do it a third time,” Stafford said. “At the same time, too, you never know what can happen.”

“It helps your mindset a little bit, puts your mind at ease to get out there and battle against not exactly a small human being, John Scott,” Stafford said. “He was my tester. So if I can do well against him, at least somewhat well, (it’s good). He was kind of throwing me around like a rag doll a little bit.”

Stafford has been playing some of his best hockey in years over the last couple months.

“He’s starting to play the way Drew can play,” Nolan said. “He’s a big, power forward. He’s snapping the puck a little bit with authority. He seems to be finding it lately. Then, all of a sudden, the injury comes back. He looks like he’s ready to go.”

Enroth said there’s “just so much I can do” and he can’t worry about his record. He hasn’t won since Oct. 25.

“I just need to prepare myself and get ready,” he said.

Enroth, a member of Sweden’s Olympic squad, sported his new pads for the upcoming Sochi Games on Sunday.

He’s not thinking about the Olympics yet, however.

“Right now, I’m just trying to focus on the last couple games here,” Enroth said. “I’m trying to not drift away, if you want to say like that. … We’ll take the Olympic experience when it happens.”