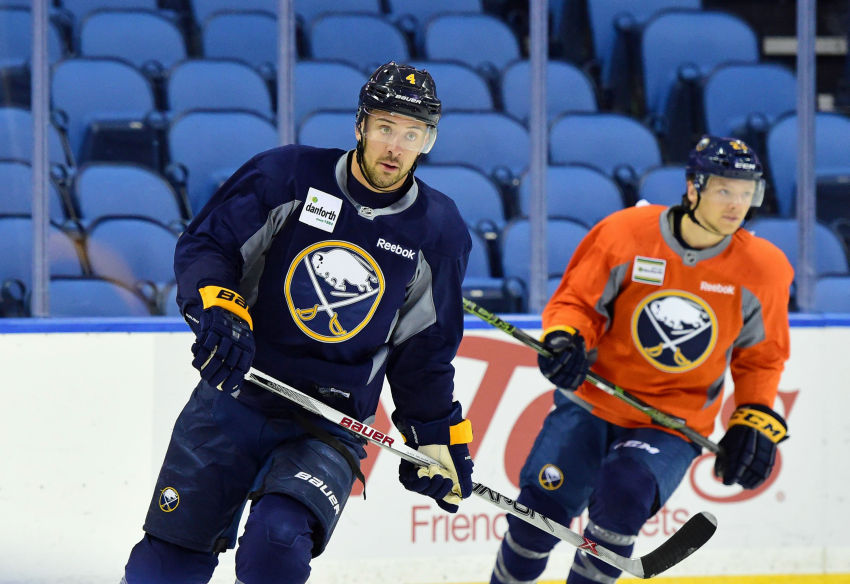 Gorges, Bylsma has quickly learned, expects a lot from himself and his teammates.

“He’s a demanding guy for how he wants the team to play,” Bylsma said Sunday. “He’s … got a little crust to him, and I’ve seen that from him in training camp so far, and that’s exactly what I want to see from him.”

As the Sabres imploded early last season, Gorges, 31, a respected leader the rebuilding club acquired to help mentor its young defensemen, struggled to understand his role. His responsibilities consumed him as the Sabres quickly plummeted to the bottom of the NHL.

“I think at times I took the reason I was brought here (was) to help mentor young D,” Gorges said inside the First Niagara Center. “Yeah, that’s great. That is and will be part of my job. But it’s first and foremost to go out there and play the game and make sure I’m doing my job on the ice, contributing the way I’m supposed to.”

Gorges’ play suffered as he tried to lead too much. At times, “I felt like I wasn’t true to myself,” he said.

“I got so wrapped with everything else that I forgot just to be me and play the game the way I’m supposed to,” he said. “Something needs to be said, you say it, but don’t go beyond that, don’t let things affect you every day, just go about your day, keep trying to be better every day. You always hear that. But I felt like I lost a little bit of that last year.”

Incredibly, the Sabres lost 36 of the 46 games Gorges, a minus-28, played. The Montreal Canadiens, his last team, dropped 36 contests in all of 2013-14. As last season dragged on, he often spoke emotionally after embarrassing losses. His awful campaign mercifully ended in February, when he underwent microfracture surgery.

“I think I learnt a lot last year about myself, about expectations, how to handle certain situations,” Gorges said.

The Sabres have a rule about their miserable 2014-15 season: Don’t talk about it.

“We’re here now,” Gorges said. “This is what’s going on now. It doesn’t matter what happened before, so let’s not talk about it. Let’s talk about what’s in front of us.”

Gorges said he has fully recovered following a six-month rehabilitation. He sounds refreshed and relieved, like he’s somehow grateful for enduring so much adversity last season.

“He’s not as old as his demeanor,” Bylsma said. “He’s still got some life left in those legs.”

Naturally, Gorges is excited about the Sabres’ offseason overhaul. They could have eight or nine new faces in the lineup opening night, including No. 2 pick Jack Eichel and top center Ryan O’Reilly.

“The future is very bright,” Gorges said. “I think this team’s heading in the right direction, and I think they’re going to be great for years to come building toward something. But I also think our time is now. … We’re here to win right now.”

“We had a good chuckle,” Gorges said about the friends becoming teammates.

In April, following the Sabres’ 30th-place finish, Gorges ripped his teammates for losing the “idea of what a professional athlete is supposed to be.” Gorges saw the players’ professionalism suffer as tank talk increased and they became the league’s laughingstock.

Just a few days into training camp, Gorges has already seen a “huge change” under Bylsma.

“The expectations of the players that we put on each other, what we’re expected to do from the coaching standpoint, from management standpoint, it’s all taken another step in the right direction,” he said. “It’s only been a couple of days, but we’re pushing for something bigger, we’re pushing for excellence, and I think … we’re going to be professionals, we’re going to act like professionals.”

Gorges said he has never had a coach who paid attention to details as closely Bylsma does. The Sabres now “practice with a purpose” and understand what each drill means.

“When it does come game time, you don’t have to think, you know why you’re going there,” Gorges said.

The Stanley Cup ring Bylsma earned with the Pittsburgh Penguins in 2009 also gives him credibility. He’s the first Sabres coach to have won a Cup as a head coach since John Muckler in 1995.