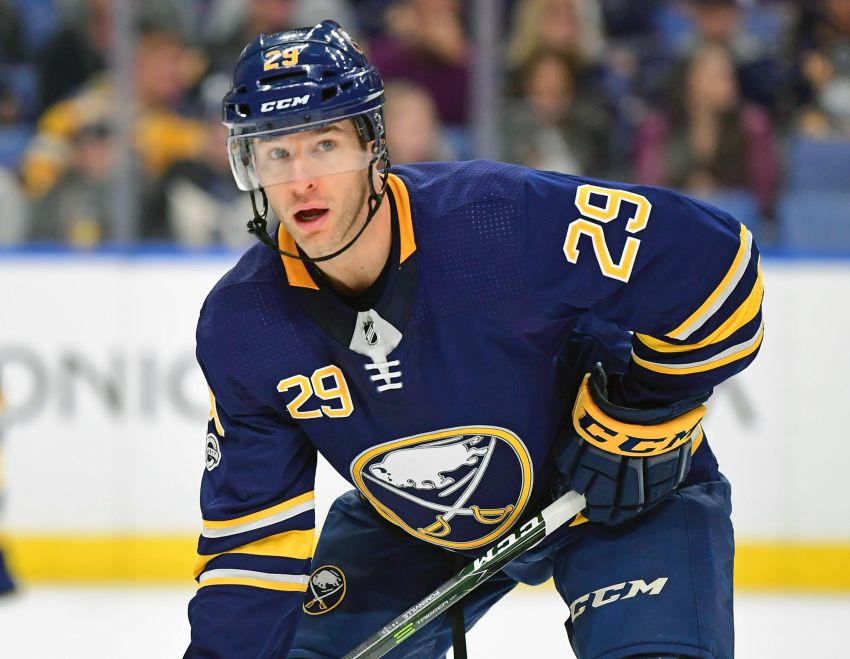 BUFFALO – While perhaps a step slower at 34 years old, Sabres winger Jason Pominville still showcases many of the talents that have helped him score 267 goals and once made him an NHL All-Star.

Wednesday against his old team, the Minnesota Wild, Pominville will likely be reunited with center Jack Eichel and Evander Kane. At an age when most players are retired or graying, Pominville is still playing on a top scoring line.

Meanwhile, defenseman Marco Scandella, who arrived with Pominville, will almost certainly be the Sabres’ top workhorse against the Wild, skating big minutes.

When the Sabres traded wingers Tyler Ennis and Marcus Foligno to the Wild on June 30, they wanted a savvy veteran forward and a puck-moving defender capable of playing in every situation.

Having scored six times in the first 21 games, Pominville, who played his first nine seasons with the Sabres, is on pace for his eighth 20-goal season.

As Pominville defies his age a bit, Scandella, 27, often looks like a defenseman in his prime, averaging 23 minutes, 43 seconds of ice time a game.

“Marco’s done a terrific job,” Housley said. “He’s logged a lot of minutes and played in every situation, has brought a great energy to our locker room, he says the things at the right time. He’s a true competitor.”

But Pominville and Scandella haven’t impacted the standings. The reeling Sabres have lost six straight games (0-4-2) and rank last in the Eastern Conference.

The transition for the players has been both easy and difficult.

“The away from the rink (part) has been really easy,” said Pominville of returning to Buffalo with his family following four years in Minnesota. “To adjust to the moving, to the family stuff and the kid stuff has been really smooth. But obviously the on-ice (part) we would expect more and we expect more out of each other.”

Still, recent history tells Pominville and Scandella the Sabres, who have five wins and 14 points, aren’t finished yet.

Three years ago, they endured a losing streak similar to the Sabres’ current skid. The Wild, a veteran team constructed to win the Stanley Cup, arrived in Buffalo on Jan. 15, 2015 losers of six straight contests and 13 of its last 15.

The Wild, which had just acquired goalie Devan Dubnyk, then shellacked the Sabres 7-0, igniting a 28-9-3 run to close the season.

“We won a game and then we got confidence and … it kind of was a snowball effect,” Pominville said. “We kept believing and pushing. We were playing a lot of games with not a lot of days off so you just get in that rhythm and you feel good about your game, you feel good about yourself. The team feels good about itself, just felt we couldn’t be denied. No matter what, we were going to win that game.”

The Wild’s crazy finish taught Pominville a lesson he can draw on in difficult times.

“Anything’s possible when you believe,” he said. “When you get back to that swagger, that confidence as a team, you feel like anything you do, you can’t be denied. Right now, it’s almost the other way where we’re giving up a bounce and we’re getting scored on or we’re not getting the bounce offensively.

“And when you’re going well, those bounces offensively usually come a little easier. But at the same time, you’ve got to work for them. We’re not going to sit here and feel sorry for ourselves.”

Scandella said the Sabres, who rank 31st overall in scoring and 28th in goals against, need “a spark to get the fire going.” One victory, he said, is “just going to open everything up.”

“There’s a lot of things that can change it,” he said. “It can be that. It can be just a big come-from-behind win, a big win on the road, or just stringing a couple together. That’s what we need to do.”

A win against the Wild would probably feel extra special for Pominville and Scandella, who was drafted by Minnesota and spent seven years with the team.

“It will be a little weird playing against my old team but I’m very excited about it,” Scandella said. “It’s definitely a day that’s been marked on my calendar.”