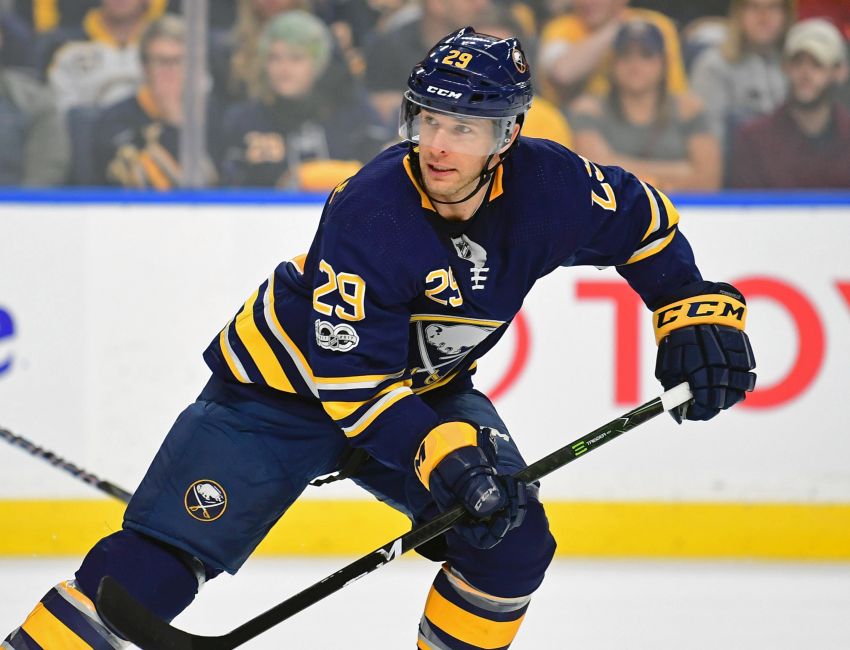 BUFFALO – At first glance, it appears Sabres winger Jason Pominville has been declining since hitting the prestigious 30-goal mark four years ago.

Statistical drops are usually inevitable as players progress into their 30s, and Pominville, 34, has experienced one, failing to reach 20 goals or 60 points the last three seasons.

In his first eight NHL seasons of 70 or more games, Pominville averaged 26 goals and 64 points. In the last two campaigns, he averaged 12 goals and 42 points.

These days, after more than four years with the Minnesota Wild, Pominville is a first-liner again, skating beside slick center Jack Eichel and Evander Kane. Pominville scored twice in Thursday’s season-opening loss, thrilling the crowd in his first game with the Sabres since April 2, 2013.

It was a vintage Pominville performance, and it begged the question: How much does the former NHL All-Star have left?

The Sabres brought back Pominville on June 30 for a slew of reasons. The former captain is often lauded for his accountability and professionalism. As a key component for two Eastern Conference finalist teams, he understands winning in Buffalo.

“It’s important to to try to bring some of that culture back,” Sabres winger Kyle Okposo said earlier this week. “He knows what it’s like to win.”

Having Pominville, a 13-year veteran, is invaluable for a young team like the Sabres, who play a road tilt tonight against the New York Islanders.

“He has a great effect on our young players, just the way he carries himself, tremendous respect,” Sabres coach Phil Housley said Friday inside KeyBank Center.

“That was my worst year since I’ve been in the league,” he said. “I wasn’t playing well, never seemed to get confidence and things just weren’t going my way.”

Very quietly, Pominville rebounded last season, compiling 13 goals and 47 points in 78 games. The numbers, however, might look a little underwhelming unless you understand his role on a stacked Wild team that earned 106 points.

“I had a pretty good year, to be honest with you,” Pominville said. “I played a limited role, didn’t really play any power play, was basically (on the) third and fourth line. My production five-on-five was pretty high for the production I had.”

Pominville averaged a career-low 14 minutes, 14 seconds of ice time an outing. He was even a healthy scratch.

Still, Pominville produced all 13 goals and 40 of his points at even strength, a number that would’ve led the Sabres.

Now, what could he do over a full season playing a few more minutes on a top line and skating on the power play? Does he, say, have another 25-goal year in him?

“He’s one of those sneaky guys who’s quicker than everyone expects him to be,” said Sabres defenseman Marco Scandella, who arrived from Minnesota in the same trade. “Maybe it’s an age thing where people think he’s not that fast. But for some reason he gets to spots quicker than most guys, and he puts himself in a position to score all the time.”

“I’ve always taken care of myself and always taken pride in listening to my body and getting myself ready in the summer,” he said.

This summer was special for Pominville, who played his first eight seasons in Buffalo and said he never thought about returning.

“When I got the call this summer, I was pretty happy, and finally to play a game and go out the tunnel was nice,” he said.

Pominville’s wife, children, parents and in-laws all attended Thursday’s 3-2 shootout loss to the Canadiens, a game he said “was pretty special.”

While Pominville’s usually mild-mannered on the ice, he let loose after scoring Thursday.

“Both of them I was pretty fired up,” he said. “It was nice to get that out of the way early.”

Pominville and Eichel already showcase chemistry together. Eichel found his linemate low in the left circle from the far wall for the second goal Thursday.

Getting used to Eichel’s adroit passing took some time.

“He uses the toe of his stick really well, so it’s weird,” Pominville said.

It often looks like Eichel’s going to shoot the puck.

“Then he just flicks it with the toe of his stick, and you got to be ready for it,” Pominville said.