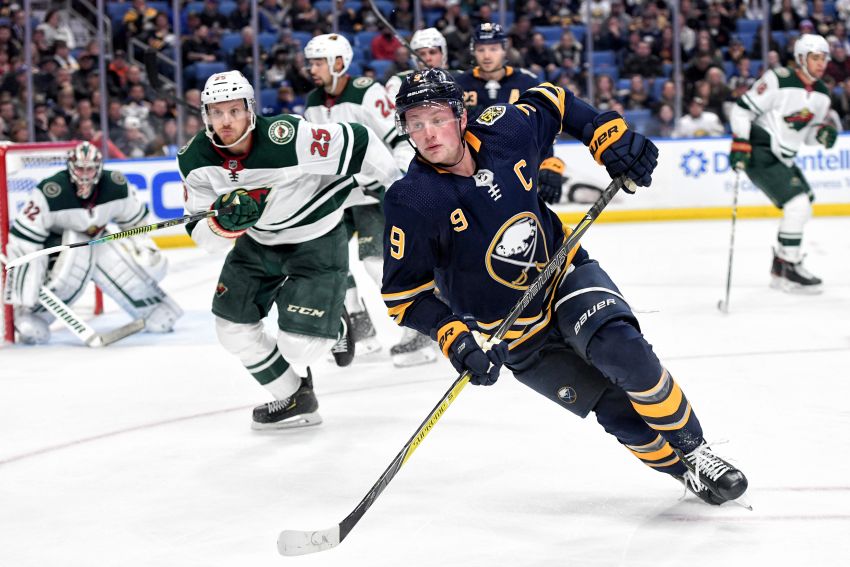 Over the past few months, Buffalo Sabres captain Jack Eichel has sat down with Kevyn Adams a few times and began to build a relationship with his new general manager.

Getting to know Adams, the third GM of Eichel’s six-year career, has been an enjoyable experience. Eichel said on a Zoom call Wednesday he has found him easy to connect with and enjoyed “a lot of really, really productive conversations with him.”

Through their chats, Eichel, 24, has developed an understanding of Adams’ expectations and the type of relationship he wants to create with his players.

“I want him to get to know me, and I want this to be a situation where we all help each other,” Adams said on a Zoom call Tuesday. “We all want the same thing, and so you can’t have that immediately. You have to build trust.”

The Sabres, who open training camp today, haven’t built much during Eichel’s tenure. They’ve remained bottom-feeders, missing the playoffs every season while burning through coaches and GMs.

Eichel, as expected, has morphed into one of the NHL’s most dynamic centers. Last season, before he slumped late and the Sabres plummeted down the standings, he generated MVP talk.

The American, however, has never seemed interested in personal accolades. The constant losing has worn on him.

When Eichel spoke to the Buffalo media in May, his last chat before Wednesday, he said he was “fed up” with losing, words he repeated again.

“I’m for sure still fed up with losing,” he said. “That never changes.”

But the offseason changes have created some optimism as the Sabres prepare for a regular season that has been shortened to 56 games because of the COVID-19 pandemic. Players will undergo testing and physicals today.

“It’s never easy to have a new GM and need to kind of start from Square 1 again,” Eichel said. “But I think Kevyn’s done a great job.”

He added: “We made a lot of really good moves in the offseason. (I’m) excited for our group.”

Hall’s decision to sign a one-year, $8 million contract with the Sabres on Oct. 11 stunned the hockey world.

“I was probably as excited as everyone else was,” Eichel said. “I think it’s going to be a huge help for us.”

The opportunity to play beside Eichel, of course, helped lure Hall, 29, to Buffalo. Eichel, who will likely pivot Hall, has watched his new teammate over the past few years, especially during his MVP campaign.

“Hallsy’s an interesting player,” he said. “He’s somebody who obviously has super high-end talent but I think one thing that goes unnoticed is his work ethic. He’s able to track down a lot of pucks, he’s hard on the forecheck, he can be physical at times. I think he creates a lot by himself by just how fast he is, how strong he is on the puck.”

Meanwhile, Eichel said trading for Staal, 36, will take “a ton” of pressure off of everyone. The Sabres sorely needed to find a No. 2 center to play behind Eichel.

“He’s a horse, he’s played in our league for so long, he’s had so much success obviously winning a Stanley Cup,” Eichel said. “He continues to produce offensive numbers every year, so I think he’s going to add a huge dynamic to our group both on and off the ice.

“He’s somebody that I can continue to learn from and somebody I can watch every day and see how he goes about his business. Somebody that I respect and I watched growing up. It’s really cool to have a guy like that in our locker room.”

If Eichel and the new additions can help the Sabres snag their first playoff berth since 2011, the team could earn a special in the heart of Buffalo sports fans.

Eichel has followed the Buffalo Bills’ closely this season and witnessed the excitement their success has created in the region.

“It’s definitely motivation for us,” he said. “We want to be successful, we want to produce a winning team and be in the playoffs and be a competitive group in our league. So, yeah, I think there’s definitely some motivation there.

“I think we should use that as a way for us to try and be as good as we can and to achieve our goals of making the playoffs and trying to win a Stanley Cup.”