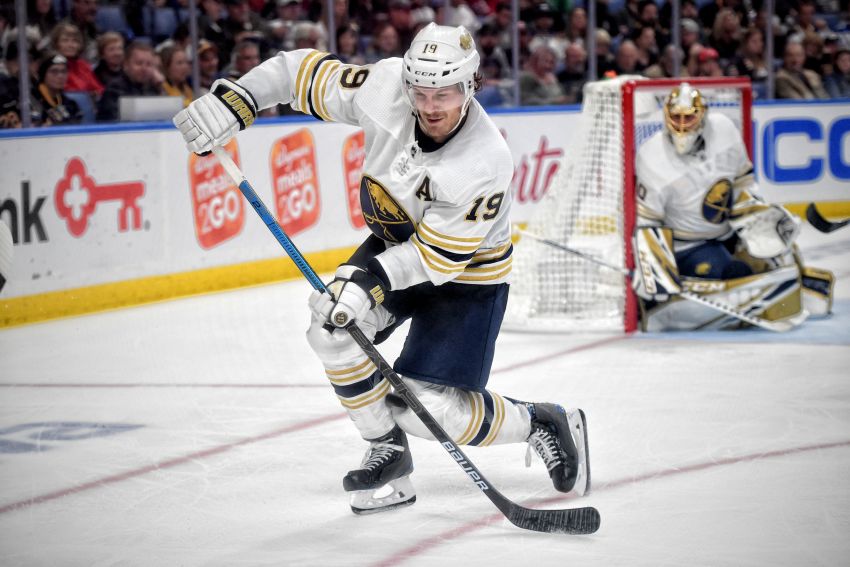 Jake McCabe believes coach Ralph Krueger is the right guy to lead the Sabres during a difficult season. ©2020, Micheline Veluvolu

Short training camps are nothing new for Ralph Krueger.

Krueger spent 13 years leading Team Switzerland at major international tournaments. He coached Team Europe to the final of the 2016 World Cup of Hockey, a gig that helped him land in Buffalo. Prior to joining the Sabres, his only season as an NHL head coach, 2012-13, began in January following a lockout.

Krueger had about a week to begin putting his mark on the Edmonton Oilers.

This year, Krueger has 11 days of ice time – the first sessions are Friday at KeyBank Center – to prepare the Sabres for the pandemic-shortened 56-game regular season that begins Jan. 14.

Limited ice, of course, is hardly ideal. No exhibition games will be played this year, only two scrimmages. The Sabres have several new players. They haven’t played a game in nearly 10 months.

The COVID-19 pandemic will likely limit the in-person teaching time the coaching staff can have with its players. Some team meetings could be conducted through Zoom or another video device.

And what happens if someone tests positive?

“It’s going to be an interesting year, for sure,” Sabres defenseman Jake McCabe said on a Zoom call Wednesday. “But I know the excitement that we’re feeling in the locker room and just to be back together with your buddies and guys that you go to battle with, I couldn’t be more excited about it, especially with Ralph leading the charge. He’s a leader that’s built for a circumstance like this, if there ever was one.”

Not surprisingly, the affable Krueger found some positives in a difficult situation. Despite some new faces, he’s familiar with most of his players.

“We are continuing a story, not beginning a story,” Krueger said on a Zoom call Tuesday. “So we have our core players who are familiar with our system. We had contacts through the offseason in different forms.

“But clearly we need to re-awaken the principles of play and the concepts that we were working on last year with the core guys.”

Krueger plans “to do small Zoom catch-ups and deepen some of the teaching that we do” with the new players.

“You need to be creative,” he said. “We all know this is going to be a season where flexibility, spontaneity and an open mind are going to be really important because we do not know exactly what the rules will be in two weeks, four weeks or six weeks.”

Krueger said he and his staff must “keep the windows small” and demand the pace and style they expect right away.

“No matter how the players feel the pain,” he said.

Most players work out rigorously during the offseason. Still, they can only do so much. They usually avoid on-ice contact.

“I am very curious to see from a sports science side how that then transfers into the one element that they haven’t seen enough of in the offseason, and that is the physical side of the game of hockey,” Krueger said. “You know, the contact, if you do a one-on-one down low and you are permanently being pushed and hit, it’s a different kind of physicality and it gets your lactic acid flowing really quickly.

“That’s something that we’ve pushed players to try to do, but you know what it’s like in summer training mode.”

“They’ve done their very best in difficult circumstances to stay up to speed,” he said. “But we won’t know the realities of that until we’re a good week into training camp. And we will be monitoring that closer than ever before. Sports science will play a bigger role than ever before because nobody has experience with this long of a break.”

Sabres captain Jack Eichel said it’s important not have too many expectations for camp.

“I find that in a situation like this, and a world we’re living in, there’s obviously going to be a lot of curveballs thrown at us throughout the season,” he said on a Zoom call Wednesday. “So for me, I think you have expectations on getting your body in shape to play, and try to develop chemistry with your team, and try and prepare as much as you can for the season.”