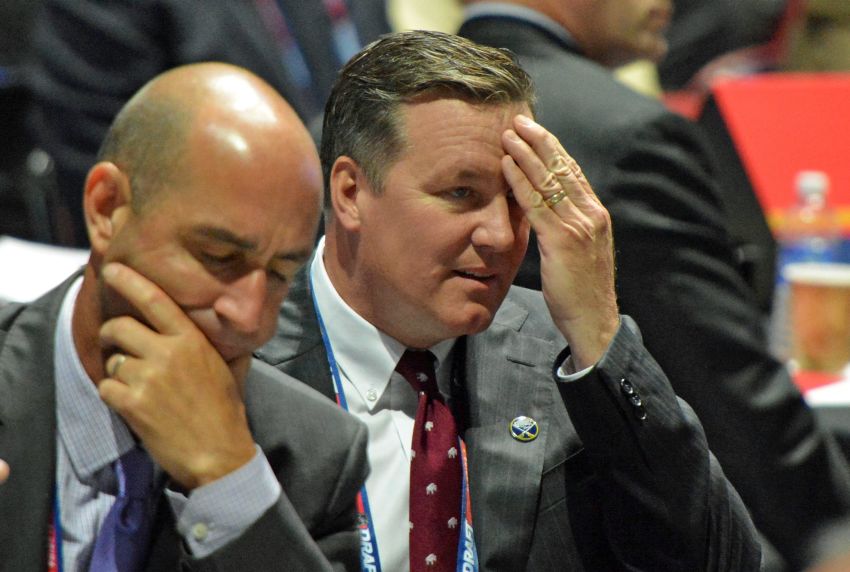 BUFFALO – On Russ Brandon’s drive to the rink to discuss his new role as Sabres president and alternate governor, a job he was awarded Monday in addition to his gig as managing partner and president of the Buffalo Bills, he reflected back to a year ago, when the NFL club’s future here was shaky.

Back then, Brandon was focused on finding a viable owner for the Bills. Terry and Kim Pegula’s interest in the team, which they eventually bought for more than $1 billion, was just materializing. Still, Brandon wondered about working for the Pegulas, who have owned the Sabres since 2011.

“Just thinking about that a year ago and standing here today is pretty daunting,” Brandon said inside the First Niagara Center.

When the Pegulas, NFL novices, assumed control of the Bills in October, Brandon proudly showed them the business and staff he had built. The Bills’ smooth operation impressed the Pegulas so much they also wanted Brandon to run their NHL club.

So on Monday, the Sabres and Ted Black, the president throughout the Pegulas’ tenure, “mutually agreed to part ways,” according to a press release. Multiple reports said Black was fired.

“Since we purchased the Buffalo Bills last October, we have been highly impressed with the business acumen that Russ has shown with the Bills,” Terry and Kim Pegula said in a statement. “Now is an appropriate time to give him additional responsibilities with the Sabres. … We are grateful to Ted Black for all he has done for the Sabres organization and wish him much success in his future endeavors.”

Brandon, who carries a reputation as a skilled marketer, said he first talked to the Pegulas about the presidency Saturday afternoon and talks escalated Sunday.

The dual role has some precedent. Scott O’Neil is CEO of the New Jersey Devils and Philadelphia 76ers. Dennis Lauscha is president of the New Orleans Saints and New Orleans Pelicans.

Brandon, who grew up in Syracuse and graduated from St. John Fisher College in Pittsford, broke down talking about taking charge of another local franchise.

“It was emotional,” he said as his voice cracked. “Just thinking of my dad today and my mom back in Syracuse, I’m from very humble beginnings. I’m the definition of regionalization. I went to school in Rochester and then lived here for 18 years.

“A lot of reflection going through my mind today and people. I would not be here if it wasn’t for my staffs, people along the way (with) my (Florida) Marlins career, my college coaches. It’s an emotional day. It’s a great day. I’m overwhelmed.”

Brandon, of course, is new to the NHL, having joined the Bills in 1997 after a stint with the Marlins.

“I don’t think there are many challenges from the standpoint I would not have accepted this role if we did not have tremendous people,” said Brandon, who now has offices at the FNC, Ralph Wilson Stadium and Pegula Sports and Entertainment.

Brandon joked “it’s time to go back to school and brush up on a few things.”

“But I’m confident with the support it can be done,” he said.

Like the Bills, Brandon’s inheriting a team with rabid support. The Sabres also have Jack Eichel, an 18-year-old center they drafted second overall last month. More than 17,000 fans attended a scrimmage July 10 just to see the mega-prospect up close.

“I remember when (former Bills quarterback) Jim Kelly came here in (1986), and this is the only thing I’ve seen close to it with this young man coming in,” Brandon said. “So I think the excitement around what (general manager) Tim (Murray) has done … make for a very bright future from a business standpoint.”

Naturally, Brandon wants to market the Sabres as a regional franchise, something he has accomplished with the Bills, who hold training camp at St. John Fisher and once held a yearly game in Toronto. Having the Rochester Americans, the Sabres’ AHL affiliate, so close will help.

Brandon, who once served as Bills GM, stressed his role will be strictly on the business side. He already knows Murray well.

Meanwhile, Black, who dubbed Buffalo “Hockey Heaven,” won’t be around to see if the Sabres can win the Stanley Cup he repeatedly promised the Pegulas would deliver. Black often vigorously defended Terry Pegula, who rarely speaks to the media.

But Black’s legacy in Buffalo might be calling the unpopular gold third jerseys the Sabres released in 2013 a “turdburger.”

Notes: The Sabres have signed defenseman Brendan Guhle, the 51st pick last month, to a three-year, entry-level contract. … The Sabres will appear on national TV five times next season: Nov. 10 at Tampa (NBC Sports Network); Jan. 25 at the New York Rangers (NBCSN); Feb. 21 versus Pittsburgh (NBC); March 1 versus Edmonton (NBCSN) – potentially the second meeting between Eichel and Connor McDavid, the No. 1 pick by the Oilers – and March 28 at Detroit (NBCSN).