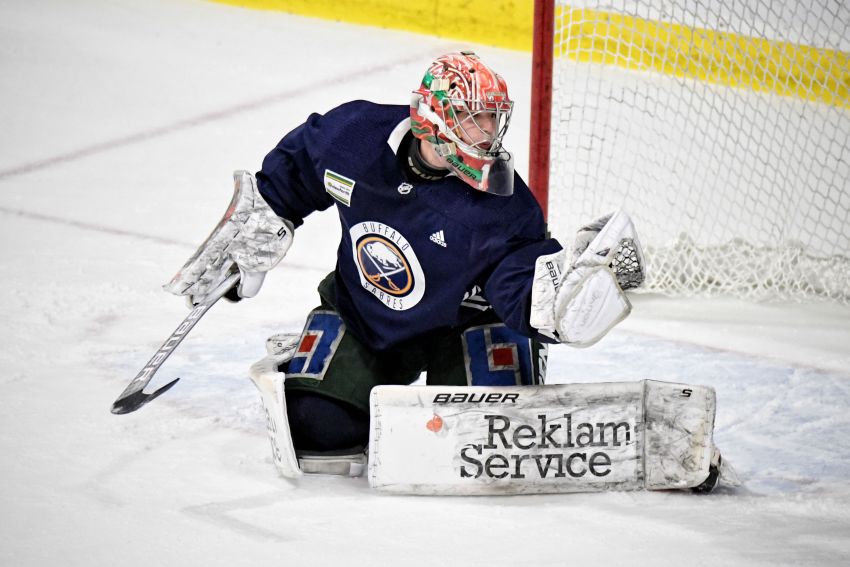 BUFFALO – You can’t miss Erik Portillo on the ice. In addition to being one of three Sabres prospects listed at 6-foot-6 on the roster, the Swede sports the gaudiest equipment of any of the six goalies in development camp.

European teams love plastering advertising everywhere, and Portillo’s Frölunda gear features plenty. Even the back of his pants have two McDonald’s logos.

But fans attending this morning’s three-on-three tournament, the conclusion of the four-day camp at Harborcenter, should watch Portillo, 18, closely for another reason.

“He’s a monster in net, right?” Dubuque Fighting Saints general manager Kalle Larsson said. “But he’s not that boring, big-blocker (goalie) that cuts angles all day and gets hit in the chest. He’s a little bit more athletic than a lot of big goalies.”

Portillo, a third-round pick last Saturday, 67th overall, is the latest intriguing European prospect in the Sabres’ arsenal. He plans to join Dubuque in the junior United States Hockey League this upcoming season before playing college hockey at Michigan.

“I would say I’m a big goaltender,” Portillo said Thursday. “I wouldn’t say big as a typical big goaltender kind of plays. I’m more of a hybrid goaltender, I like to play the puck with my stick and more to the hybrid side.”

If hockey ever falls through, Portillo, 18, will be fine, according to Larsson.

“He comes from a family with very academically inclined parents,” Larsson said. “He’s dialed in. If he doesn’t become a hockey player, I don’t think he has to worry about it. I mean, he’ll be a rocket scientist or something along those lines. He’s very intelligent.”

Of course, if Portillo ever makes the NHL, it would likely take four or five years. The youngster is a long-term project.

The Sabres believe Portillo, who was passed over in last year’s draft, is a bit of a late bloomer.

What helped buoy his development?

“I got (a) new goalie coach, Peter Andersson,” Portillo said. “He’s famous and he’s an amazing guy, he really came into the team and helped me and the defense. …

“I would give him a lot of credit for that. He’s my mentor right now, I would say, he’s the big difference from the year before.”

Larsson, who grew up in the same town, Gothenburg, as Portillo, said he heard rumblings last year he wanted to attend college in the United States.

“He educates himself on what’s best for me and my path in hockey,” Larsson said of Portillo.

Portillo said playing with Dubuque offers him the “best step” to prepare for college. He chose Michigan because he “felt safe when I came there.”

“They had everything, the resources to get to the NHL, I think,” Portillo said. “I feel like I can really focus on the hockey there and I will get help with the school stuff.”

The Sabres’ recent history of developing homegrown netminders is awful.

Right now, Ukko-Pekka Luukkonen, who will likely start next season with the Rochester Americans, is the Sabres’ goalie of the future. Barring injury, Luukkonen will almost certainly graduate to Buffalo in the near future.

But other than Linus Ullmark, who has played 63 NHL games, only two goalies the Sabres drafted in the last 12 years – Connor Knapp and Nathan Lieuwen – have ever cracked the NHL.

Notes: Sabres forward prospect Matej Pekar said he hasn’t been skating in camp this week because he suffered a minor shoulder injury training earlier this month. “It’s nothing serious,” he said. … Another forward prospect, Aaron Huglen, a fourth-round pick last week, 102nd overall, said he has stayed off the ice because he hurt his back lifting weights.