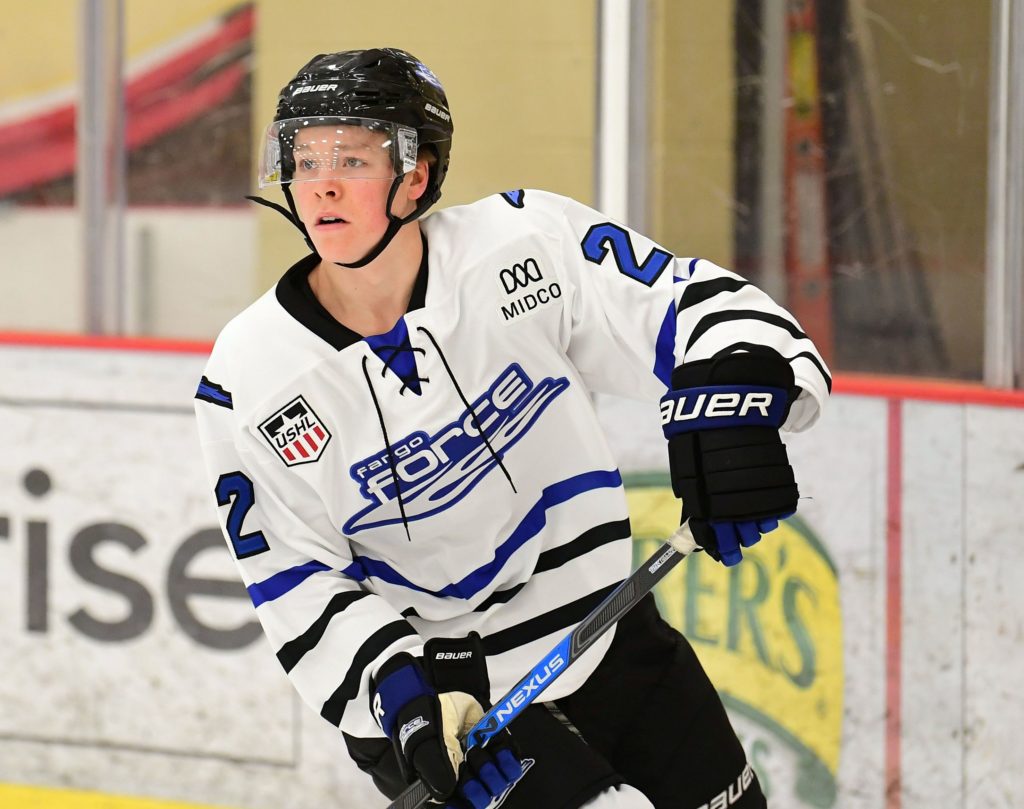 VANCOUVER – Among the highlights of new Buffalo Sabres prospect Aaron Huglen on YouTube is a clip of what general manager Jason Botterill called “the Mike Legg goal.”

Last year at the Hlinka-Gretzky Cup, an under-18 tournament, Huglen pulled off one of hockey’s toughest moves, scoring a goal by quickly lifting the puck and wrapping it into the net.

Legg, Botterill’s teammate at Michigan, made the lacrosse-style goal famous in 1996.

“There’s a wow factor just because it happened in such a big tournament, too,” Botterill said Saturday after the Sabres selected four more players at the NHL Draft inside Rogers Arena. “But then I don’t think there’s too much of a reaction beyond that. It’s just a goal.”

Still, Huglen’s slick goal illustrates how much talent was available at this year’s draft.

Huglen, a forward the Sabres moved up to grab in the fourth round, 102nd overall, is far from a sure thing.

The Minnesota native, 18, spent part of last season playing hockey at Roseau High School. At 5-foot-11 and 166 pounds, he must develop his body more than most youngsters.

But these days, even a fourth-round pick possesses incredible skill.

“He’s a young man who definitely has a lot of hockey sense and a lot of skill,” Botterill said. “It is a recurring theme when you draft an 18-year-old, a 19-year-old, it’s a long development plan. He hasn’t been in, say, (the) USA development program and some of these higher-end ones.

“There’s a lot of work for him to be done off ice to mature to be a National Hockey League player, but the skill, the hockey sense is something that certainly attracted us and in interacting with him to take the right steps to become an NHL player.”

The Sabres traded the 122nd and 175th picks to the Vancouver Canucks to move up and take Huglen.

“We know he’s got the skills and abilities,” Jankowski said. “It’s just going to be a little bit longer development curve. The organization’s patient with that.”

Here is more information on the Sabres’ other picks Saturday:

As expected, the Sabres took a netminder on the second day of the draft.

Botterill said Portillo will likely play in North America next season with the USHL’s Dubuque Fighting Saints. After that, he should move on to Michigan and play NCAA hockey.

“Without a doubt we were happy,” Botterill said of taking Portillo. “As you know in the goalie market, it’s always a question of when you take them, where you take them, and we understand with Erik he’s a longer-term project.

Jankowski called Portillo, who was passed over in last year’s draft, a bit of a late bloomer.

The Sabres dished the 177th and 191st picks to the Detroit Red Wings to move up and select Cederqvist.

“We like the fact that he played in the SHL this year,” Jankowski said. “He played in a men’s league, he played with a very good club there. He’s a well-rounded player, too, but he’s got a nice little skillset, a very direct player.

When Rousek’s name was announced, a loud cheer was heard inside the rink.

The Czech, 20, was one of the rare possible late-round picks who showed up to the draft. Rousek said he had a training camp in California, so he figured why not show up?

Rousek said he is under contract in the Czech Republic two more years.

“Lukas had a great year this year in the Czech Elite League,” Jankowski said. “He had a tremendous second half and was the team’s leading scorer in the playoffs. Our scout in the Czech Republic was extremely passionate about him.

“He’s a very well-rounded player, but the skill and the offense at the end of the season this year gave us a hint that there was still some offense there.”

Jankowski on center Dylan Cozens, the prospect the Sabres drafted seventh overall Friday: “He’s going to be a good centerman in the NHL. This organization now, with Jack (Eichel) and Casey (Mittelstadt) and Dylan, it gives us great options.

“So we think that he’s a guy who’s going to be able to produce some offense while playing a well-rounded, 200-foot game with good size (6-foot-3, 183 pounds). He still has the frame to fill out, still a little bit immature physically. Which is great, it shows there’s a little bit of upside there and it gives us good depth at the center position.”