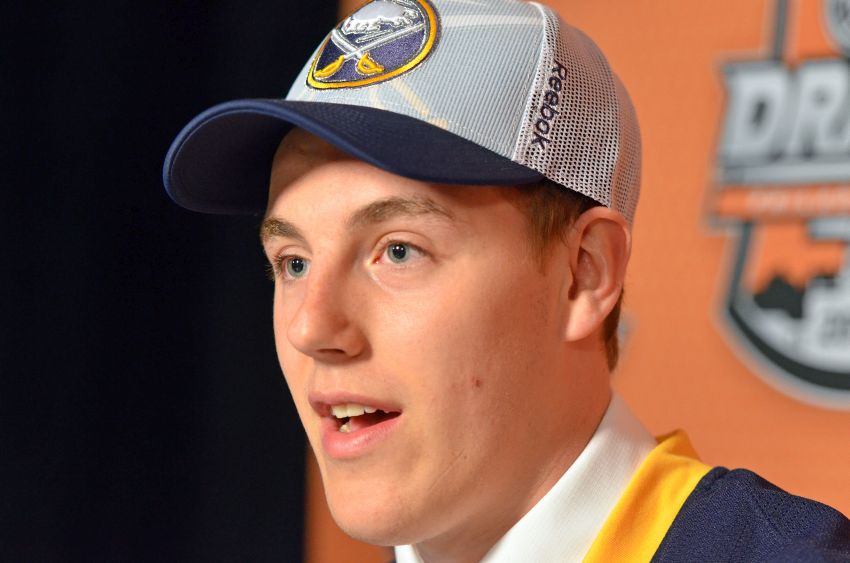 PHILADELPHIA – The rebuilding Buffalo Sabres added nine new prospects, seven of them forwards, including No. 2 pick Sam Reinhart, at the NHL Entry Draft this weekend. Of course, hold any judgments on their performance for three or four years.

On Saturday afternoon, however, in the afterglow of his first draft, general manager Tim Murray called it “outstanding,” saying, “Our guys are happy.”

The theme this weekend? The rookie GM put an emphasis on skill and hockey sense, going for some home runs instead of simply making some safe picks.

“If they do hit, they have an opportunity to play higher than the fourth line,” said Murray, who believes the Sabres have enough of those players in the organization.”

He added: “I think we went after potential. They’re certainly not ready-made players.”

Murray can’t be sure each youngster meshes perfectly with the Sabres.

“You can only take what the draft gives you, right?” he said. “Would I like each kid to be two inches taller and 10 pounders heavier? Of course I would. The draft is the draft.”

Murray wants his scouts to vouch for players, make a case for their talents.

“I made them do a lot of talking, explaining why they wanted certain players, and that’s the way I think it should be,” he said. “I think if you want a player, you have to engage. You just can’t tell me he’s a good player. You have to tell me more.

Murray’s wanted to secure another first-rounder Friday. He couldn’t despite offering seven teams all three of his second-rounders. He had an offer for the No. 31 pick, but he kept it and chose winger Brendan Lemieux, who wasn’t the player the Sabres wanted to move into the first round to grab.

Murray said he tried to make a “unique” trade Saturday.

“I said, ‘We got to do like the NBA,’” he said. “So I went to a team and said, ‘You trade me your first pick from yesterday.’ He didn’t want to be the first guy to do that. So I’m not sure I did, either. But I thought it was a good idea.”

The Sabres traded the 39th pick to Washington for the 44th and 74th selections.

The Sabres have a four-year window with Johansson, who’s 6-foot-3.

“He’s not developed physically,” said Murray, who relied on his European scouts for a recommendation. “That’s kind of the shot that I like. … He’s athletic. That’s the one I question I asked.”

Martin had six goals and 37 points in 72 games last season.

“I’d say I play a two-way style, kind of lean toward more of an offensive style,” Martin said. “I like to run the power play.”

“It’s big shoes to fill, but hopefully I can amount to even half the player he has,” he said.

Brown, the son of former NHL player Doug Brown, had 26 goals and 84 points in 28 games last season. He’s playing a year in the United States Hockey League before joining Boston College in 2015-16.

Olofsson had 32 goals and 52 points in 44 games with Modo Jr. last season. He also played 11 games with MODO in the SHL.

Murray after being asked about signing Reinhart:

Murray said all the trade talk happening two weeks ago “died on the vine.”

Murray said the $69 million upper salary cap could help the Sabres, who must add money to reach the floor and are willing to take on salaries.

“I asked a couple guys up at the top,” he said. “It wasn’t a drastic fall for them. But even a little bit for some teams is a lot. I suspect that that will impact us in a couple days. … It may put a couple more players in play.”

Murray the Sabres won’t make qualifying offers to some restricted free agents, although he wouldn’t name them.